Something prehistoric. Something mythical. Something otherworldly. Here, in the middle of the desert, is a magical menagerie of free-standing sculptures that will astound you. 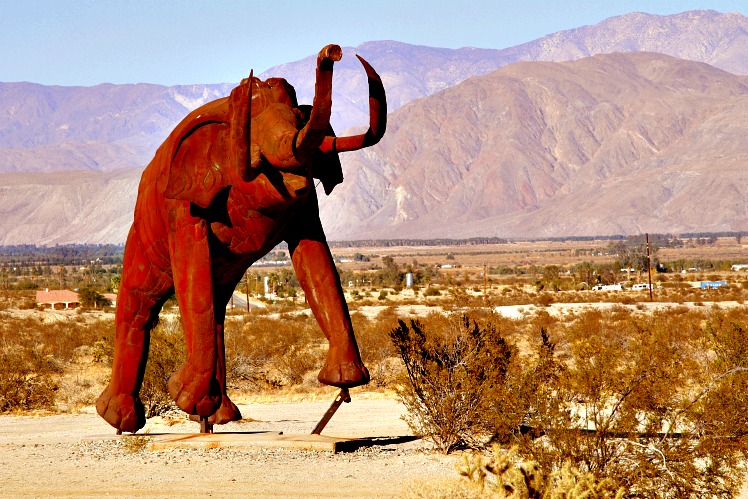 Imagine driving along Borrego Springs Road and something catches your attention—a dark form in the desert landscape. You spy a horse as it rears off to the side of the road. You look again and it is big, but it doesn’t seem to be moving. Then you look again and you realize it is a huge sculpture that has captured your attention. Then, rising out of the flat desert landscape, an elephant appears. Alarmingly close by, a T-Rex bears its maw chasing a saber-tooth tiger.

From the corners of your eyes these large structures can be deceptively realistic. This is not a mirage but the gifts of visionary benefactor Dennis Avery (now deceased) and the craft of artist/welder Ricardo Breceda.

The original steel welded sculptors began arriving in April 2008, taking up residence on Avery’s private parcel of land known as Galleta Meadows Estate and easily visible from Borrego Springs Road, north and south. There are now over 130 meticulously crafted metal sculptures sprinkled throughout the small town of Borrego Springs. Elephants, raptors, mammoths, sloths, and saber-toothed tigers prowl the desert off Borrego Springs Road north and south of the town proper. From ground-hugging desert tortoises to rearing horses, each rust-colored sculpture is filled with intricate detail–from the curling eyelashes of 10-foot high elephants to the shaved metal fur of the equally imposing sloths.

Made of waffle-sized pieces of shaped steel, the sculptures weigh between 800 and 1,000 pounds each. It’s just basic rusting steel that gives it a very nice patina resembling hide. The forms are representative of prehistoric animals, the original inhabitants of Borrego Springs. The Gomphotherium free-standing art structures are placed in various locations along Borrego Springs Road and Henderson Canyon Road. The sculptures are set in natural areas where the animals appear to be a normal part of the landscape.

Avery is the son of the founder of Avery Dennison, one of the world’s largest label-making companies. In the early 1990s, Avery was persuaded to buy land in Borrego Springs, primarily by people who wanted open space preserved.

“When there was the huge savings and loan crash in the early 1990s everything was for sale in Borrego,” Avery said. “Nobody wanted to buy a thing. So I bought everything.”

“I ended up being landed gentry in the basin of Borrego somewhat accidentally,” he said. “I haven’t done anything with it except open it up to the public once a year when the flowers show up.”

Avery had long been interested in the paleontological history of the basin. In 2006, he helped finance a book about the fossil treasures of the Anza-Borrego Desert. He also came across a Mexican artist, Ricardo Breceda, who worked out of Perris, California, and conceived the notion of having Breceda re-create the fossil history in a way people could appreciate. The designs are based on the book’s renditions, drawn by other artists and based on fossils, of what the animals looked like.

“Starting more than 100 years ago, some paleontologists started kicking up some tusks and bones and birds, and it turns out Borrego Springs is the burial ground for the past 7 million years of these fossil remains of the original inhabitants of Borrego, when it was really water and jungle-like,” Avery said.

The sculptures, two of which are 12 feet tall and 20 feet long, depict a family of gomphotheres—relatives of the woolly mammoth that lived roughly 3 million years ago in the Borrego Valley. All are three-dimensional replicas of animals that roamed the Borrego Valley during the Pliocene epoch, when the area was riparian forest.

I am part of all that I have met
Yet all experience is an arch wherethro
Gleams that untravell’d world, whose margin fades
Forever and forever when I move.