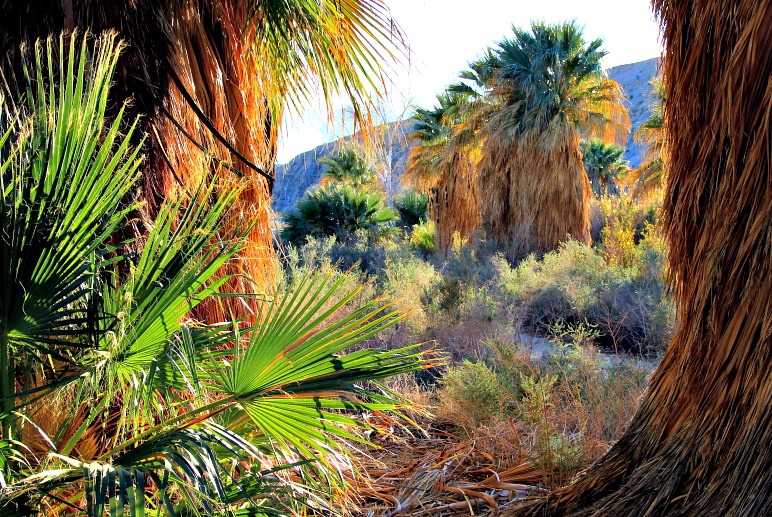 On the northern side of the Coachella Valley, nestled at the feet of the Indio Hills, the Coachella Valley Preserve is the Old West just minutes from Palm Springs, Indian Wells, Rancho Mirage, Palm Desert, Indio, and other desert cities. The Preserve is a natural refuge where visitors can discover rare and wonderful wildlife species. Enjoy some of the 20,000+ acres of desert wilderness and over 25 miles of hiking trails, most of which are well marked.

By a quirk of nature there’s water here, too, but it doesn’t usually come in the form of rain. The Preserve is bisected by the San Andreas Fault and this natural phenomenon results in a series of springs and seeps which support plants and animals which couldn’t otherwise live in this harsh environment.

Enjoy palm groves, picnic areas, a diverse trail system, and the rustic visitor center, the Palm House. Inside the historic building are trail maps as well as unique displays of the natural and historic features of the area.

The palm encountered in the oases within the Preserve is the California fan palm, or Washingtonia filifera. It is the only indigenous palm in California. The Washingtonia filifera has a very thick trunk and grows slowly to about 45 feet. Dead leaves hang vertically and form what is called a skirt around the trunk providing a place for various critters to live. Inflorescences, or fruit stalks, extend beyond the leaves and bear masses of tiny white to cream colored flowers. During the fall months, large clusters of small hard fruit hang from the tree. The palms may live 150 to 200 years.

No one knew just how significant a 6-inch lizard would be to conservation in Coachella Valley. In 1980 a lizard small enough to fit in the palm of your hand brought the $19 billion Coachella Valley construction boom to a screeching halt. When the lizard was placed on the endangered species list by the U.S. Fish and Wildlife Service, all development was jeopardized because it might illegally destroy habitat for the Coachella Valley fringe-toed lizard.

A six-year conflict ensued as environmentalists battled developers over the fragile desert habitat. Finally, the Nature Conservancy was called in to resolve the bitter stalemate and the result was a remarkable model of cooperation through which endangered species and economic development could co-exist.

The Conservancy proposed creating a nearly 14,000-acre preserve that would provide permanent protection for the little reptile and other desert species, while allowing developers to build elsewhere in the valley. It was a great experiment in cooperation that produced astonishing results. The creation of the Coachella Valley Preserve proved that through consensus, economic development, and species protection can indeed be compatible.

From easy to moderately difficult, from flat terrain to steep grades, hikes of all varieties are available. There are also several designated equestrian trails, but there are no bike or dog-friendly trails. One hike that is a sure bet for all levels, is through varying desert terrain to the McCallum Grove, about a mile from the Palm House visitor’s center. There are about a dozen isolated palm groves within the preserve, the largest being McCallum Grove.

There’s more water here than anywhere else in the preserve and the overflow allows a large and diverse community to thrive, including tiny freshwater crayfish called red swamp crayfish, desert pupfish, and the occasional mallard duck making a brief stopover during its annual migration.

After leaving McCallum Grove keep hiking west on marked trails out to “moon country”. You will come to an overlook that provides you with great views of the entire area. From there you can return to the visitor’s center or continue via the 4.2-mile Moon Country Trail Loop, or the more advanced Moon Country Canyon Extension which adds an additional 1.63 miles roundtrip.

Other delightful trails include Pushawalla Palms, Horseshoe Palms, and Hidden Palms which are all somewhat more strenuous hikes.

From Palm Springs take Interstate 10 East to the Ramon Road exit. Turn left and follow Ramon Road and make a left turn on Thousand Palms Road. The entrance to the visitors center is located about two miles on the left.