Usery Mountain Regional Park is a staggeringly beautiful place. It’s as “Arizona” as it gets. 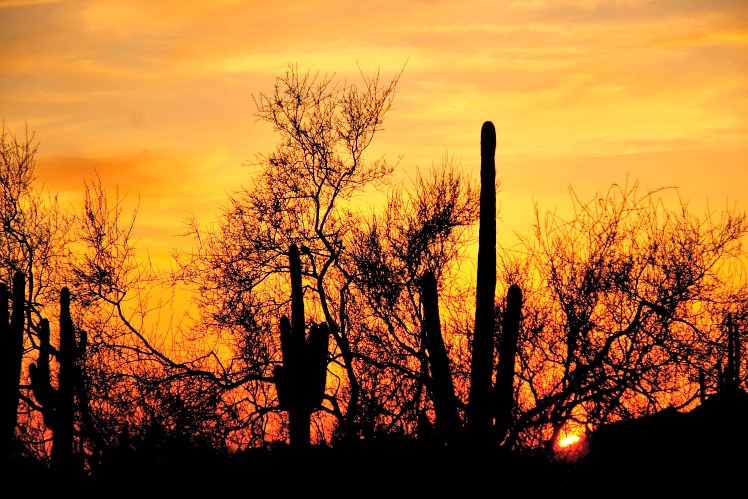 The Spanish found the desert to be very inhospitable. On their maps, central Arizona was labeled as “deplobado” meaning, “desolate wilderness.” My initial reaction was not that different!

Usery Mountain is where my love of and discovery of The Southwest began. That would be early April 1987 when we spent a week in site 48.

At that time, I wrote in my journal: “The spectacular desert mountain scenery here is breathtaking. When we first arrived in Arizona our reaction was why would anyone winter in this dreary, harsh, unforgiving desert environment, let alone live here. The Sonoran Desert grows on you with a beauty all its own. And the beauty of Usery Mountain is absolutely stunning.”

And we have enjoyed camping here numerous times since.

Located on the Valley’s east side, this 3,648-acre park became part of Maricopa County’s regional park system in 1961. The park is set at the western end of the Goldfield Mountains, adjacent to the Tonto National Forest. The park contains a large variety of plants and animals that call the lower Sonoran Desert home. Along the most popular features of the park, the Wind Cave Trail, water seeps from the roof of the alcove to support hanging gardens of Rock Daisy. The Wind Cave is formed at the boundary between the volcanic tuff and granite on Pass Mountain. Breathtaking views from this 2,840-foot elevation are offered to all visitors.

The traditional account of settlement of the Salt River Valley credits a former Confederate Officer and gold seeker, Jack Swilling, with the beginning of the modern irrigation in central Arizona. Swilling came into the Valley in 1867 and noted the presence of ancient canal systems of the early Native Americans who had irrigated the same lands.

If Swilling traveled between John Y.T. Smith’s hay camp a few miles east of downtown Phoenix and Fort McDowell, as he presumably did in the summer of 1867, he came within sight of Usery Mountain Park and even closer to the ruins of an old canal system and an ancient Native American village situated between the park and the Salt River. The first Swilling canal brought water to fields east of the present Arizona State Hospital near Phoenix and inspired the beginning of other canal building.

Usery Mountain Regional Park became a park in 1967. Pass Mountain, also known as “Scarface” to the local folks, is the geological focal point of the park. The mountain itself was named for King Usery (sometimes spelled Ussery). “King” was his first name, rather than a title. He was a cattleman who was running stock in the area in the late 1870s and early 1880s. He had a tough struggle to survive and, apparently losing ground, moved up into the Tonto Basin country where his activities, unorthodox, provided him a kind of unwanted security…behind bars.

On January 5, 1892, the Globe-Florence stage was held up by two highwaymen and two bars of silver bullion valued at $2,000 were stolen. The driver identified the highwaymen as King Usery and Henry Blevins. Posses took the field, soon learning that Usery had been riding a black horse stolen from the Webb Ranch on Tonto Creek. At the George Middleton Ranch, the sheriff and his deputies were told that Usery had been seen burying something in swampy ground near the Salt River. One of the bars was quickly recovered. Surrounded at his ranch, Usery surrendered but a search revealed he had hidden two pistols inside his pants legs, suspending them from his belt with rawhide thongs. For this crime, Usery was sentenced to a term of seven years in the Territorial Prison in Yuma. Despite a successful plea for a new trial, the conviction stood. After two years, he was pardoned.

Usery wandered from the legal path a second time and was convicted of stealing cattle. He received a light sentence in Gila County and upon his release, he disappeared.

Usery Mountain Park is on the border of a mountain region. Nearby ranges are the Superstitions on the east, the Goldfields on the north and northeast, the Usery Mountains immediately northwest, and the McDowell Mountains across the Salt River to the northwest. A broad basin lies west and south of the area.

Usery Pass was also known for being a major sheep trail leading from the high country north of Mt. Baldy south to the Salt River Valley. Flocks of sheep, led by Mexican and Basque shepherds with their dogs, presented a picturesque sight in the spring and fall as they moved into or out of the Coconino plateau region.​

Usery Mountain Regional Park offers over 29 miles of trails for hiking, mountain biking, and horseback riding. Park trails range in length from 0.2 miles to over 7 miles and range in difficulty from easy to difficult. If you are looking for an easy, relatively short hike, the Merkle Trail is barrier-free. If you are looking for a long more difficult hike, try the 7.1-mile Pass Mountain Trail. Another visitor favorite is the Wind Cave Trail that reaches high onto the mountain side and allows hikers onto the adjacent Tonto National Forest.

The trails within the Usery Mountain Regional Park are very popular because they have enough elevation to offer spectacular vistas of surrounding plains. All trails are multi-use unless otherwise designated. All trail users are encouraged to practice proper trail etiquette. Always remember to carry plenty of water and let someone know where you are going.​ Heavy sole shoes are a must as well as sunscreen and a large-brimmed hat (I recommend a Tilley hat).

Usery Mountain Regional Park offers a campground with 73 individual sites. Each site has a large parking area to accommodate up to a 45 foot RV and offers water and electrical hook-ups, dump station, a picnic table, barbecue grill, and fire ring. Usery Mountain provides restrooms with flush toilets and hot water showers. All sites in the campground may be reserved online at maricopacountyparks.org.

From central Phoenix, take I-10 east to US 60 east. Exit Ellsworth Road north to the Usery Mountain Regional Park entrance.