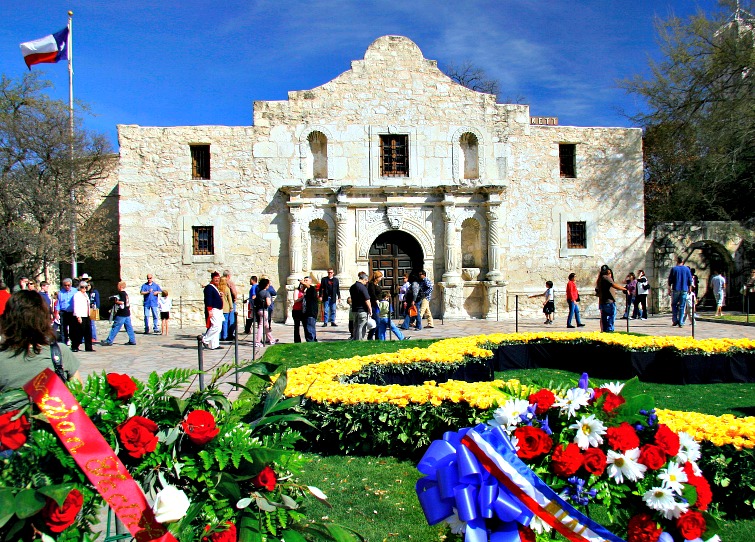 Good morning, good afternoon, good evening. I don’t care when you read this, but just know: RVing with Rex is perfect for any time of day. Whether you’re all hopped up on cold brew, making travel plans to some far-flung destinations (in your RV, of course!), sending multi-paragraph emails to a customer service representative at XYZ RV Repair Shop, staring at your phone while nodding off during a mid-afternoon slump, or staying up late into the bewitching hour to put some final touches on your watercolor portrait of The Alamo, it’s never a bad time to pick up what RVing with Rex is putting down. And what a day to do so!

Today’s post is all about the Shrine of Texas Liberty.

Remember the Alamo! It was the battle cry of Texas freedom fighters during the decisive Battle of San Jacinto, led by Sam Houston against Mexico in April 1836. And it was a memorial to the doomed defenders of the Spanish mission turned Texas fort; they had tried, without success, to hold off Mexican general Antonio López de Santa Anna in late February and early March of that year. The Alamo became a bloody battlefield and a hallowed final resting place for those who would never leave these grounds alive.

On the 13th day—March 6, 1836—the Alamo finally fell, and its defenders became American legends. The aftermath has inspired Americans for almost 180 years, and the battle cry “Remember the Alamo?” has been repeated over and over again.

We were able to recall the power of the phase on a visit to the Alamo. The Alamo is not located in a vast field like Gettysburg or the Little Big Horn. Rather, it is located just off what now is the Alamo Plaza. Here’s a place where you can lose yourself in a world of brave deeds.

To understand the Alamo and its impact on the Texas Revolution, one needs to understand its times. From the historical perspective, you would be well served to first visit one of San Antonio’s other missions, for they provide insight into the way the Alamo once functioned. With the exception of the Alamo, the missions are all run by the National Parks Service and the grounds have been preserved, unlike those of the Alamo which are now engulfed by the city.

In 1833, Santa Anna had just become President of Mexico, assuming a dual role. Colonists, he decreed, could buy property in these barren Texas lands, but shortly thereafter, he revised his thinking and told the colonists to go back home, which most refused to do.

This uneasy truce between Mexico and the colonists lasted until October 2, 1835, when citizens at Gonzales, under the leadership of William Travis, held fast to their convictions—and to their cannon. When Mexican soldiers approached within cannon range, the defenders of Gonzales fired. Travis and his men then retreated 60 miles to the Alamo—where several months later, they achieved immortality.

In Texas, remembering the Alamo is nothing new. More recently, the Daughters of the Republic of Texas began sponsoring a Living History reenactment, and as fate would have it, we were there for the annual March event. While it was not our first visit to the Alamo, historically it was the most significant!

On this Sunday morning we joined an exceptionally large crown of thousands to “Remember the Alamo,” and the battle there on a similar morning many years earlier.

Texans recalled the 189 known defenders who died and the 400 to 600 Mexican troops killed or wounded.

The place was packed, full of tourists. They came from all over, to participate in the battle reenactment and other activities. Grabbing their muskets, straightening their hats, and pulling on jackets ranging from ratty leather to officer uniforms, they readied themselves for the various activities.

Dressed in period clothing they demonstrated how both the Mexicans and the Texans lived—how they prepared food, played music, made cloth and clothing, and played out the story of the battle.

The amazing scenes began as the actors assembled, established the setting at the Alamo, and ended with the fateful swarming of the mission. Smoke bellowed into the plaza from the cannons and from the cap-and-ball pistols used at the time, and spectators brushed shoulders with Mexican soldiers—and with the heroic figures of William Travis, David Crockett, and Jim Bowie.

But, the story continued. Just six weeks after the fall of the Alamo, Sam Houston’s army caught up with the soldiers of Santa Anna, literally asleep along the banks of the San Jacinto River. There, just nine Texans lost their life as Houston defeated Santa Anna. Houston spared the general’s life, and with the Mexican capitulation, Texas won its independence, becoming a republic.