Livingston Parish is filled with things to do, places to see, and a treasure trove of Southern Louisiana charm and culture 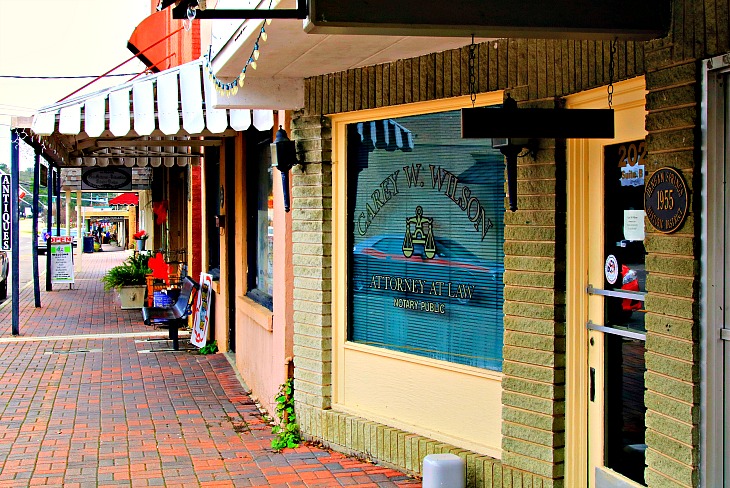 Shortly after settling into Lakeside RV Park we oriented ourselves to the area (Livingston Parish) with a day trip to Denham Springs. Livingston Parish is located between New Orleans and Baton Rouge.

Easy-on, easy-off (I-12; Exit 22), Lakeside RV Park is big-rig friendly with back-in and pull-through sites. Our back-in site is in the 55-60 foot range with 50/30-amp electric service, water, and sewer centrally located. No cable TV. Wi-Fi worked well from our site; no problem locating satellite. All interior roads and sites are concrete. Site amenities include picnic table and fire pit.

Denham Springs is located just a few miles east of Baton Rouge and is easily accessible via I-12 (Exit 10). At Denham Springs we wandered the Historic Downtown/Antiques Village and stopped at Mr. McDavid’s Specialty Meats to purchase pork boudin and smoked boudin.

Mineral Springs near the Amite River about one-half mile west of the present historic downtown drew settlers to the area. The springs attracted visitors who came to bathe in the reportedly-therapeutic mineral waters, and a resort developed around them.

The settlement was known at different times as Benton’s Ferry, Amite Springs, Hill’s Springs, and lastly, Denham Springs. The name came from William Denham, a Mississippi native who moved to the area and married Mercy Houge, daughter of Alexander Houge, one of the two original landholders.

By the 1960s-70s, commerce stagnated and businesses closed. Denham Springs became a bedroom community as many residents commuted to Baton Rouge to work and shop. Downtown buildings were shuttered for many years until the 1980s when first one and then another and then more antique stores and other shops opened for business. Today the downtown is a designated Main Street Community and is known throughout the South for its antiques, arts, and specialty shopping.

Our first stop on the walking tour was the Old City Hall in the heart of the downtown historic district. This historic building currently houses the Welcome Center, a small museum, and serves as a civic gathering place. This stately building is on the National Register of Historic Places. Built in 1940, this building is constructed of poured concrete and includes two stories and a basement—a unique feature in this part of the country.

Benches in Driggers Park, a small “pocket” park in the heart of the historic downtown district, allow visitors to rest a few minutes as they explore and shop the Antiques Village. We took time to admire the beautiful mural painting of the historic Springs Hotel and the mineral springs which drew settlers to the area in the early 1900s. A photograph of this hotel was the inspiration for the painting of the mural in 2014. The photograph currently hangs in the Old City Hall.

The oldest continuously operated business in the historic downtown district is the Benton Brothers. The business was established in 1938 by brothers Leslie, Edwin, and Robert Benton, one of the oldest families in this area. The three buildings on this site once housed an appliance/furniture business.

General building deterioration caused the three buildings to be demolished. A new store was built in 1973 and a brick facade was added in 1986. It is still owned by the Benton family and now operates as an antiques mall.

The first moving picture to be shown in Denham Springs was screened in the Farmers Association Building (circa 1917) in 1923. Later, Savoy’s Grocery operated in this building.

Livingston Parish was one of the hardest hit areas in the catastrophic flood of August 2016 with an estimated 75 percent of the homes a total loss. A low-pressure front remained nearly stationary over the area for days with rainfall rates of up to 2-3 inches an hour resulting in a total rainfall of 25-30 inches. The storm dumped three times as much rain on Louisiana as Hurricane Katrina, enough to fill Lake Pontchartrain about four times. Eight rivers reached record levels including the Amite River which crested at nearly 5 feet above the previous record in Denham Springs. The Historic District was under water. At one point, a 62-mile section of Interstate 12 was closed because of flooding. Lakeside RV Park escaped flooding since it is located on higher ground.