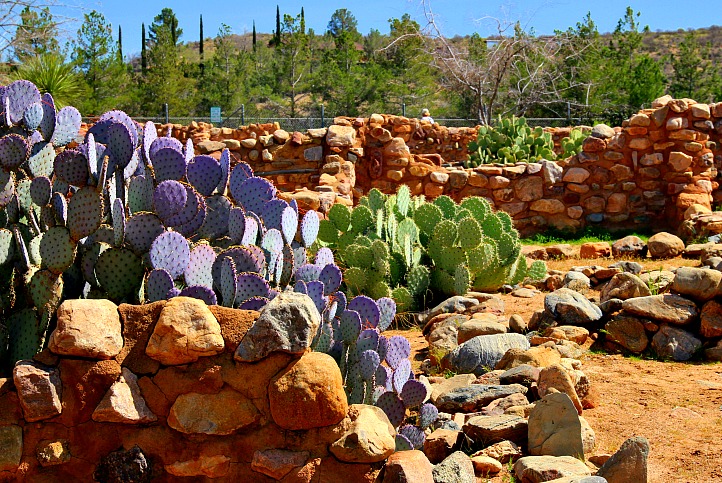 This ancient village is known today as Besh Ba Gowah. The term was originally given by the Apaches to the early settlement of Globe. Roughly translated, the term means “Place of Metal.”

Besh Ba Gowah Archaeological Park and Museum offers visitors an opportunity to explore the ruins of this relatively advanced culture, a museum which houses a large collection of Salado pottery and artifacts, botanical gardens, and a gift shop. The adjacent Ethno-Botanical Garden illustrates native Arizona plants that were used in their daily lives.

Archaeologists consider Besh-Ba-Gowah a ceremonial, redistribution, and food storage complex. Salado Culture is identified as the cultural period from 1150 to 1450 in the Tonto Basin. Located at the confluence of Pinal Creek and Ice House Canyon Wash, Besh-Ba-Gowah Pueblo has one of the largest single site archaeological collections in the southwest and is one of the most significant finds of Southwest archaeology. Visitors walk through a 700-year-old Salado Culture pueblo, climb ladders to second story rooms, and view the typical furnishings of the era.

Besh-Ba-Gowah had about 400 rooms of these about 250 were ground floor rooms. Precise numbers are impossible due to modern destruction of sections. Entrance to the pueblo was via a long narrow ground level corridor covered by the second level. The corridor opened onto the main plaza. This may have had a defensive purpose.

The present day interpretive trail uses plaques to inform the visitor. It begins with the ancient entrance way to the main plaza which measures 40 x 88 feet. About 150 elaborate burials were placed under the plaza. Hereditary high status is suspected from burial evidence in the plaza.

The ruins had very few doors. Room access was by roof hatchways with ladders. Several reconstructed rooms with prehistoric contents are featured.

Cross-sections illustrate the roof construction of logs covered with layers of reeds, mats, and a thick coat of mud. The trail leads past the largest room in the pueblo, the so-called ceremonial room. A sipapu filled with turquoise dust and covered with a large quartz crystal was found in the room. The room contains built-in benches at various levels, four large roof support posts, and an altar on the east wall. Another unique feature of the pueblo is a small platform mound.

Situated between a great number of Southwestern cultures, the Salado traded actively with neighbors both near and far. Seashells discovered in the village show that the Salado traded with people from as far as Mexico and the Pacific Ocean.

Inside the museum two models of the ruins are presented. One shows the present condition. The other is a hypothetical reconstruction of the pueblo in 1325 A.D. It shows 20 courtyards and two three-story sections. One of the displays illustrates the archaeologist’s tool kit. Stone items on display include manos and metates, delicate carved stone palettes, stone axes and hoes, obsidian points, turquoise beads, local minerals, and a bow drill for bead making. Fabric artifacts include woven baskets and mats, sandals woven from yucca leaves, and fine woven cloth.

One wall of the museum is covered with shelves of ancient pottery two pieces deep. A wide and diverse range of pottery includes red and white ware and plain and decorated pots. Besh-Ba-Gowah has a high percentage of decorated ware.

The Salado crafters of these bowls painted them with a white paint and a black paint made from boiled plant residue, although they sometimes used red in the late-Tonto style. The Pinto polychrome, emerging around 1275, displayed simple geometric patterns, while the Gila and Tonto polychromes that developed later had more elaborate designs and embellishments. Gila polychromes are the most widely spread pottery style in the Southwest, ranging from Casas Grandes in Mexico to the Mimbres Valley in New Mexico, with the highest concentration of the pottery found in the Tonto Basin.

The museum includes an excellent bookstore and gift shop and a small theater. Videos inform visitors about the ancient cultures and the ruins. An excellent assortment of informative books and scientific journals can be accessed by visitors.