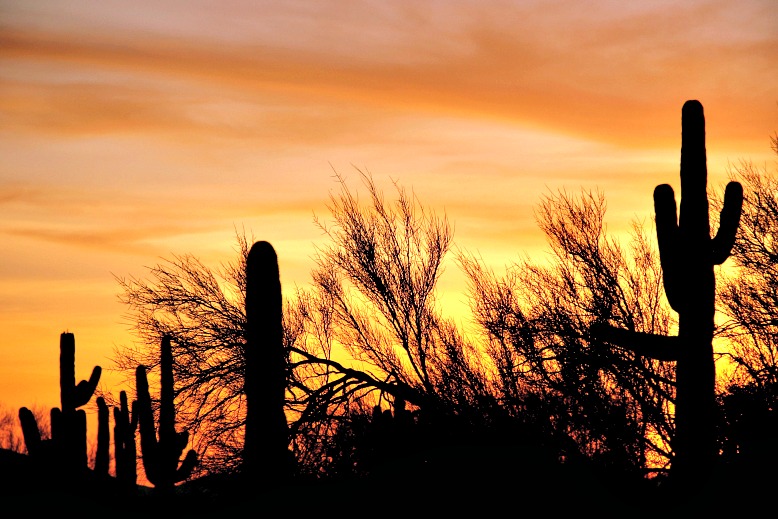 Solitude and sweeping views in all directions reward those willing to make a relatively short hike in this 2,922-acre park. Cave Creek Regional Park has more than 11-miles of joint-use trails for hiking, mountain biking, and horseback riding. In additional campsites with excellent facilities along with individual picnic sites beckon the whole family.

Cave Creek which is located north of Phoenix became part of Maricopa County’s regional park system in 1963.The park sits in the upper Sonoran Desert and ranges in elevation from 2,000 feet to 3,060 feet. This desert oasis offers hikers, bikers, and equestrian majestic views. The Go John Trail loops around a mountain to provide the illusion of being miles away from civilization. In the 1870s, fever stricken gold seekers staked their dreams on the jasper-studded hills. Guided trails to these sites give visitors an opportunity to travel back in time.

Cave Creek was named for the small stream that rises in the hills to the northeast and flows southwesterly for 25 miles before reaching Paradise Valley. The stream, in turn, was named from a high, overhanging bluff along its west bank that forms a wide, open cavern about two miles north of the present day Cave Creek.

The Cave Creek area has a rich archeological foundation. Ancient Hohokam Indians stayed in the area from around 800 A.D. until 1400 A.D. Many reminders of their living in the area still remain. Stone huts, pit houses, terraced field, and irrigation ditches were left behind. There are also many petroglyphs that were carved by the Hohokam and others.

During the 1400s, bands of Apache Indians began drifting into the area. They brought with them a different lifestyle than the Hohokams. Instead of farming, the Apaches lived by hunting, gathering, and raiding. The 1500s saw the arrival of Spanish explorers. The Spanish found the desert to be very inhospitable. On their maps, central Arizona was labeled as “deplobado” meaning, “desolate wilderness.”

Mining began to become a focal point in central Arizona history in 1863. The call “Gold in the Bradshaws” rang out. Fabulous rich gold outcroppings were found in high peaks such as Antelope Hill. In 1864, Henry Wickenburg uncovered the richest strike, the Vulture Mine. Miners were sure that the Aqua Fria River, New River, Cave Creek, and the stream of the Tonto were also rich with gold.

A few miners tried to find the treasures but the Apaches ran them out of the area. Ranchers and farmers followed lured by reports of mild climate, plentiful water, tall timbers, and lush grass. All of the reports failed to mention that hostile Indians surrounded the area. Of all the tribes in the area, the Apaches were the most feared. They were highly mobile, unpredictable, and difficult to capture.

Newcomers to the State appealed to the Federal Government for assistance. The Civil War was demanding the need for every soldier. Washington leaders decided they did not want to lose the potential gold production capabilities of Arizona. In 1863, Arizona was declared a new and separate territory, splitting off from the territory of New Mexico.

Just North of Cave Creek, the area of Bloody Basin was the site of a bitter skirmish on March 27, 1873. Army scouts trailed a group of Apaches to the top of Turret Peak. The scouts crept up the peak during the night. At dawn they captured or killed nearly all of the Apaches. The pressure on the Apaches began to have its effects. With the army destroying any discovered food storage areas, the Apaches were beginning to suffer. Hunger drove the Apaches to surrender. By 1877 about 5,000 Indians from various tribes shared the San Carlos Reservation. The time of the Apaches along Cave Creek was over and a new era of mining was coming to Cave Creek.

Cave Creek Regional Park offers over 11-miles of trails for hiking, mountain biking, and horseback riding. Park trails range in length from 0.2 miles to 5.8 miles and range in difficulty from easy to difficult. If you are looking for an easy, relatively short hike the Slate Trail is recommended. If you are looking for a longer, more difficult hike, try the 5.8-mile Go John Trail. The trails within the Cave Creek Regional Park are very popular with dramatic elevations and spectacular views of the surrounding plains. All trails are multi-use unless otherwise designated. All trail users are encouraged to practice proper trail etiquette. Always remember to carry plenty of water and let someone know where you are going.​ Heavy sole shoes are a must as well as sunscreen, and a large-brimmed hat (I recommend a Tilley hat).

Cave Creek Regional Park offers a Day-Use Picnic Area and a Group Picnic Area. The day use picnic area has 51 individual picnic sites, each providing a table and barbecue grill. Drinking water and restrooms are available in the Day-Use Area and sites are available on a first-come, first-served basis. For large groups wanting to picnic together, weddings, or office parties, consider renting a ramada. Cave Creek Regional Park has four large ramada areas with picnic tables, barbecue grills, drinking water, electrical outlets, campfire pits, and a nearby playground.

These ramadas can be reserved for a fee in four-hour increments. If not marked as reserved, they are available on a first-come, first-served basis.

The campground consists of 55 campsites for RV camping. The average site size is 40 feet; however, pull through sites may accommodate up to a 60-foot RV with water and electrical hookups, a picnic table, and a barbecue fire ring. Cave Creek Regional Park provides restrooms with flush toilets and hot water showers. A dump station is available for use by registered campers at no additional cost. All sites in the campground may be reserved online at maricopacountyparks.org.