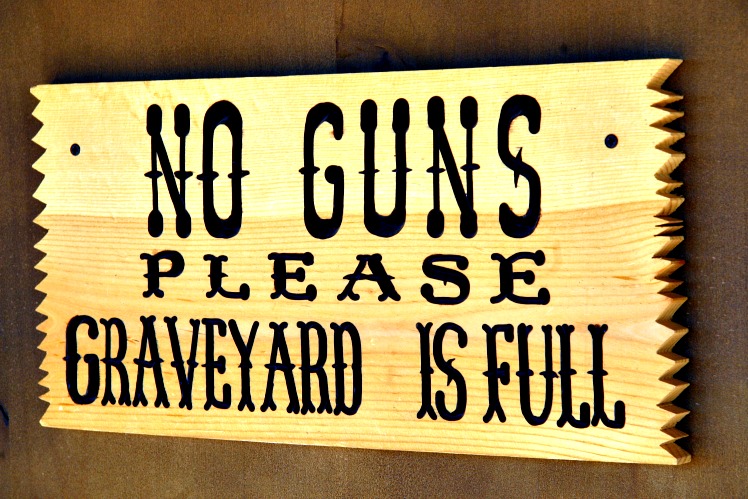 Sparked by Edward Schieffelin’s silver strike (skeptics warned he’d only find his own tombstone), the raucous town boasted more than 60 saloons. Tombstone is known for the famous street fight near the OK Corral between Wyatt, Virgil and Morgan Earp and Doc Holliday vs. Frank and Tom McLaury, and Billy and Ike Clanton.

The fierce gunfight was quick and when the bullets stopped flying, Billy Clanton, Tom McLaury and Frank McLaury lay dead. Billy’s brother, Ike Clanton, kept his life that day but was eventually murdered near Springerville, Arizona. Virgil and Morgan Earp needed weeks to recover from serious wounds but Doc Holliday was barely grazed by a bullet. Surprisingly, Wyatt Earp was unscathed.

The OK Corral still stands and gunfights are re-enacted as visitors are thrown back to a time when life was bold and uncompromising. Tourists can visit the many historical buildings dating back to the 1880s. Stagecoach rides, Old West saloons, museums, trading posts, dance hall girls, cowboys, and unique photo opportunities also add to the adventure.

In 1889, the New York Times referred to Tombstone as the “wildest, wickedest night spot between Basin Street and Barbary Coast”. And while the American West had many of these old Western towns at one time, most of them have crumbled away to nothing or been torn down for the creation of modern buildings.

It was probably the extreme violence that played up in dime-store novels that gave Tombstone its special mystique and allowed it to survive. Home of the fabled Boot Hill Graveyard, Tombstone is not a recreated town, but contains the actual buildings that existed in the 1880s when it grew up around the rich silver mines in the area. Western movies by the dozens have depicted the wild tales of Tombstone and, even though its heyday lasted only seven or eight years, this small town south of Tucson has come to epitomize the essence of the Old West.

Called “The Queen of the Boom Towns”, Tombstone is an especially popular vacation spot for vacationing families as well as snowbirds wintering in Arizona.

Cowboys and outlaws, frock coats flapping and six-guns ready, prowl the streets looking for a fight. Gunfire erupts and smoke drifts through town while marshals try to keep order. Ladies of the evening lounge on street corners in their colorful and daring outfits, while proper ladies in long gowns and parasols stroll the boardwalk.

Tombstone isn’t hard to explore by foot—being all of three blocks long and two blocks wide­—but it’s more fun to do in style by riding a stagecoach through town and listening to the colorful history unfold around the various buildings as you ride past.

Other buildings worth exploring include the Tombstone Courthouse where much of Tombstone’s history is displayed, and the Bird Cage Theatre (6th and Allen, you can’t miss it), where ladies of the night entertained their male callers in small cage-like compartments suspended from the ceiling. Anyone who remembers the song, “She was only a bird in a gilded cage,” can relate to this. The song, highly popular in its day, was inspired by the Bird Cage Theatre.

Among the many attractions of Tombstone is Boot Hill Cemetery on the northwest edge of town off Highway 80. Surviving a day in Tombstone was a victory as its famous Boot Hill Cemetery overflowed with those shot during poker games, killed in drunken-induced gunfights, and even hung for simply becoming a public nuisance. Undertaking was no doubt a lucrative profession. The cemetery takes its name from the fact that many of the people buried there died quickly and violently and were buried with their boots on.

Fast is fine but accuracy is final. You must learn to be slow in a hurry.