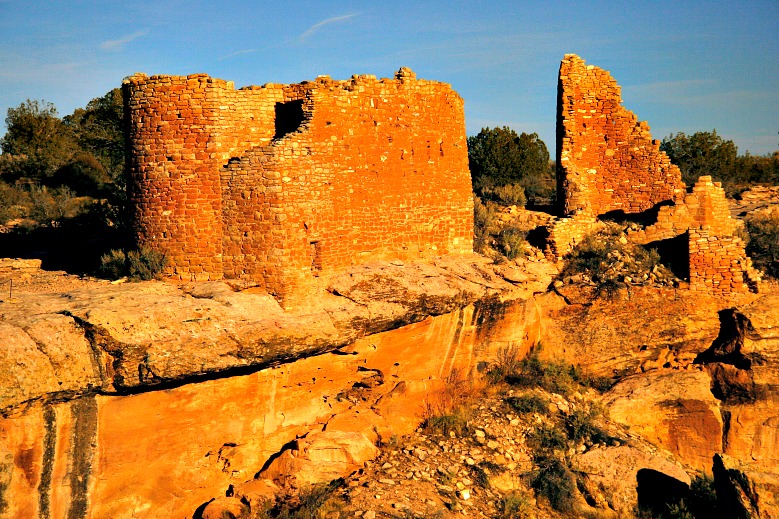 In the high desert country which straddles the border between southeastern Utah and southwestern Colorado, the Hovenweep ruins with their mysterious towers induce a strange silence, something you cannot quite explain.

Walk in ancient footsteps. Soak in the silence. Marvel at a night sky overflowing with stars. Hear a lone coyote’s howl. Experience the past at Hovenweep National Monument.

In our experience at Hovenweep (a Ute word meaning “deserted valley”), you hear nothing at all for long periods. When you see the occasional visitors, they seem to walk along the trails and among the ruins in deliberate quietness. They seem to speak with hushed voices, as though they were exploring the sanctuaries of the great old European cathedrals, many constructed at about the same time the early Pueblo people called Anasazi built the Hovenweep villages.

Hovenweep is one of those out of the way destinations that is easy to miss, especially in the midst of southeastern Utah where national parks such as Canyonlands and Arches, Monument Valley, the San Juan River, and Cedar Mesa offer a myriad of recreational options.

Hovenweep preserves six villages once inhabited by the ancestors of today’s Pueblo people. The six Hovenweep site groups are located within a 20-mile drive of each other along the Utah-Colorado border.

These units vary greatly in size, the largest of which is the 400-acre Square Tower Group. Both this group, where the Ranger Station is located, and Cajon Ruins are located in Utah. The Colorado sites are Holly Ruins, Hackberry Canyon, Cutthroat Castle, and Goodman Point. Altogether, Hovenweep National Monument encompasses 785 acres.

The visitor center contains exhibits and educational information for visitors. There is a small sales area with books specializing on the cultural and natural history of the area.

These structures evoke an ancient time—one filled with the sights and sounds of a vibrant and dynamic culture. Family groups built their homes at the heads of canyons, surrounding life-giving seep springs that provided water, cooler temperatures, and shade from the cottonwood and hackberry trees that grew there.

Perched on the canyon rims, these villages have weathered the centuries, owing to their solid foundations and careful construction. The towers and rooms of Hovenweep are unique in the style and quality of their masonry. Stones are carefully shaped and small rocks and mortar fill the gaps between, keeping out sun, cold, wind, and any small creatures.

These structures at Hovenweep are numerous and varied. Some are square, some D-shaped, some round, some almost four stories tall. The exact purpose of the towers is uncertain, but possibilities include celestial observatories, defensive structures, storage facilities, civil buildings, communications towers, and ceremonial buildings. Only limited archeological work has been done at Hovenweep. None of the structures have been rebuilt and remain standing after 700 years.

The Hovenweep people built increasingly larger and taller towers over time, an indication of the increasing importance of the structures. They built them (in cross section) in D-shaped, square, rectangular, circular, or irregular outlines. They located them, often with perilous entryways, on canyon ledges, canyon bottoms, even atop large boulders.

In some of them, they built viewing ports, suggesting lookout or, possibly, defensive structures. In some, they left ceramic vessels, stone tools, stone grinding basins, and food plant traces, suggesting living, working, and storage areas. In some, they incorporated wall openings which admitted shafts of sun at summer solstice, suggesting solar calendars. For some, they constructed tunnels which led from the towers to kivas, suggesting a ceremonial function.

Why did the Hovenweep people, unlike other Anasazi, concentrate on building increasingly large towering structures with various cross-sectional shapes, in differing (even dangerous) locations, for apparently diverse functions? Why did they hold the towers in such importance? No one can say for sure.

The towers remain one of the enduring mysteries of Southwestern archaeology.

I hope you dance because…

Time is a wheel.

Time is a wheel in constant motion always rolling us along.

—Mark D. Sanders and Tia Sillers, I Hope You Dance