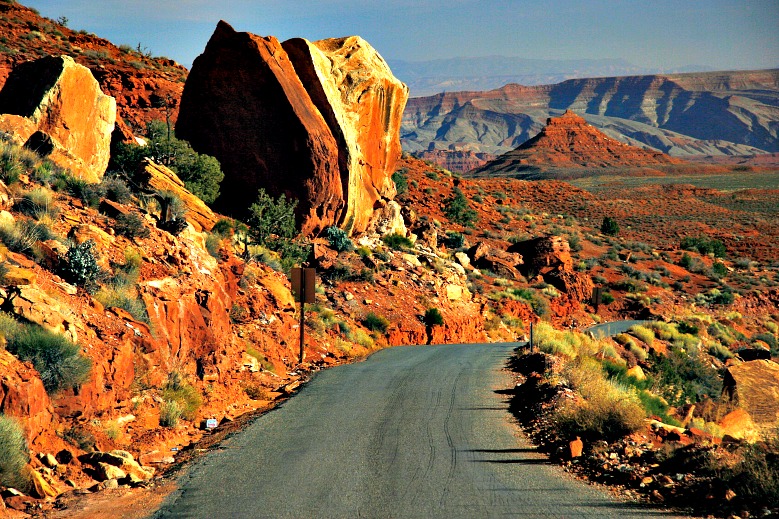 With spring officially here and warmer, longer days on the horizon, now is the perfect time to plan a spring road trip. Nothing beats packing up the RV, making some new playlists, and heading off for a road trip. Here are 10 of my favorites from sea to shining sea.

As biomes go, deserts often get a bad rap but taking a 225-mile spin from the sandy shores of San Diego to Joshua Tree National Park is anything but dry. This Southern California road trip is spiritual, stylish, and outdoorsy. The first stop as you head east over the San Jacinto Range is Julian, a nostalgic town with u-pick apple orchards and the famous Julian Pie Company.

Press on through vista-filled mountain passes to Anza-Borrego Desert, California’s largest state park. Every spring it’s one of the most reliable spots to peep a super bloom. It has great hiking with chances to see 2,000-year-old petroglyphs and pictographs or bighorn sheep. Nearby Galleta Meadows contains 130 mammoth steel sculptures by Ricardo Breceda. Borrego Springs, an artist colony, is a good place to stop for lunch and gallery hopping. The Salton Sea has excellent birding as it sits along the Pacific Flyway.

Palm Springs reveres its mid-century modern architecture and Rat Pack roots but embraces its natural environment at the Coachella Valley Preserve and the Living Desert. Spend a day opting outside at Joshua Tree National Park, slightly larger than Rhode Island and full of strange Seussian trees and don’t leave before the stars come out as it’s a certified dark skies park.

The Trail of the Ancients and the Moki Dugway

The Trail of the Ancients which traverses Colorado and Utah is America’s only national scenic byway dedicated solely to archaeology and will take you to some of the most famous sights in the country including Four Corners, Monument Valley, and Mesa Verde National Park. You could make this 480-mile drive straight through in one very long day but following a seven-day itinerary allows you to truly experience the Native American history along the route. The Trail of Ancients is paved, save for a harrowing three-mile, switchback-laden stretch known as the Moki Dugway as it descends to the Valley of the Gods offering unrivaled panoramic views of this otherworldly landscape.

The Blue Ridge Parkway is a 469-mile drive connecting two national parks—Shenandoah in Virginia and the Great Smoky Mountains in North Carolina—and it is the most visited road controlled by the U.S. National Parks System. This journey is epic at any time of year but in autumn when the colors begin to change and the trees glow with vibrant oranges, reds, and yellows you’d be hard-pressed to find a prettier drive and road trip destination in North America.

When you think of California’s giant redwood trees, you likely imagine coastal redwoods. Those are the tall ones dotting the rugged northern California coastline and a road trip to see them is a must-do. But the giant sequoias are no slouches themselves! The giant sequoias you’ll see on this road trip are only known to exist in 75 specific groves along the western slopes of the Sierra Nevada. What makes these giants unique is that they grow incredibly large around their base and this differentiates them from coastal redwoods which are typically measured in height.

This specific journey north from San Francisco spans 900 miles and it will take you to the Discovery Tree, the first redwood noted by naturalists in the 1850s and should the weather permit give you a sunset in the famed Yosemite Valley. Have your camera charged and ready to capture the magic of this road trip destination as Ansel Adams once saw it.

Traveling the Kentucky Bourbon Trail can take three days or three weeks. It is whatever you make of it so stop by the gift shops, take distillery tours, and soak up the history lessons, and the tasty beverages. Having a designated driver each day of your road trip makes all of this possible and safe.

True to its name the 130-mile-long Alabama’s Coastal Connection connects multiple communities and cities bordering Mobile Bay and the Gulf of Mexico. It also connects travelers to nature and history at nearby preserves, parks, and historic sites. The scenic byway features a ride on the Mobile Bay Ferry connecting Dauphin Island to the Fort Morgan Peninsula. The 40-minute ride across the mouth of Mobile Bay spans two historic forts where the Battle of Mobile Bay took place during the Civil War. Here Union Adm. David G. Farragut bellowed his now immortal command, “Damn the torpedoes, full speed ahead!”

From Dauphin Island to Orange Beach, Alabama’s 60 miles of Gulf Coast includes white-sand beaches. For a socially distant experience, explore the 7,100-acre Bon Secour National Wildlife Refuge on the Fort Morgan Peninsula. In addition to beach access points to uncrowded sands, there are hiking trails through a maritime forest and coastal dune habitats with views of saltwater lagoons, freshwater lakes, the beach, the bay and the chance to see wildlife. A number of waterfront towns line the coast. The artsy Eastern Shore enclave of Fairhope has a pier jutting a quarter-mile into the bay with an adjacent beach park and shady areas for a quiet picnic.

A Deep Bayou Drive from NOLA

You should start this road trip with a rollicking good time in New Orleans’ French Quarter. Enjoy a few late NOLA nights, too many Hurricanes at Pat O’Brien’s, and some jazz at Preservation Hall, then sleep all that off before heading west (in your RV, of course) to begin a deep bayou road trip adventure. The area is known for its swampland dotted with moss-draped cypress trees teeming with wildlife which makes it the perfect destination for bird watching, paddling, fishing, and numerous other outdoor activities.

The best road to drive is Highway 31 which will take you along Bayou Teche from New Iberia to Breaux Bridge, a scenic route with garlands of moody Spanish moss that dangle from oaks and cypress trees while alligators and herons splash about in the swampy lagoons. Nature watchers and photographers have immediate access to some of the best birding sites in North America including Lake Martin (near Breaux Bridge) with its expansive shoreline and bottomland hardwood forest. At last count, birders have spotted 240 species here. In the evenings, snowy, great and cattle egrets, little blue herons, green herons and yellow-crowed night herons gather to roost. Be sure to tour the Longfellow-Evangeline State Historic Site where you’ll learn about the area’s Creole and Cajun history and culture.

Not for the faint of heart, I-90 spans from sea to shining sea. From Boston to Seattle, this 3,024-mile highway travels through 13 states and features niche attractions like the Jell-O Gallery Museum in Le Roy, New York, the birthplace of Superman in Cleveland, and the RV/MH Museum and Hall of Fame in Elkhart, Indiana. Some larger attractions not far from I-90 include Mount Rushmore, Niagara Falls, and national parks including Yellowstone and the Badlands.

America’s longest north-south interstate, I-95 stretches for more than 1,900 miles down the Atlantic Coast from Maine to Miami with plenty to see and do along the way. Road trippers can kick off their journey with a visit to Acadia National Park in Maine followed by a stop in Boston to explore the cobblestone streets and the city’s waterfront neighborhood. Further adventure await in New York City with endless sights to see, things to do, and places to eat before venturing on to the nation’s capital, Washington, D.C. Continue down the coast to the scenic shores of Outer Banks in North Carolina then explore historic downtown Charleston, Savannah, Jacksonville, and Daytona Beach before reaching your final destination in Miami.

The Great River Road has been dubbed “The Best Drive in America,” covering 3,000 miles from Minnesota to the Gulf of Mexico. While it would take about 36 hours to drive this entire route, travelers can make a spring (or summer) vacation out of this journey that follows the Mississippi River through 10 states. Starting in Minneapolis road trippers can visit the famed Mall of America or one of Minnesota’s 11,842 lakes before heading south to Wisconsin. This historic route also features iconic monuments like Gateway Arch National Park in St. Louis, and streets like Beale Street—otherwise known as “Home of the Blues” —in Memphis and the French Quarter in New Orleans. Road trippers can rest and recharge at numerous campgrounds and RV parks along the way.

If you don’t know where you’re going, any road will take you there.