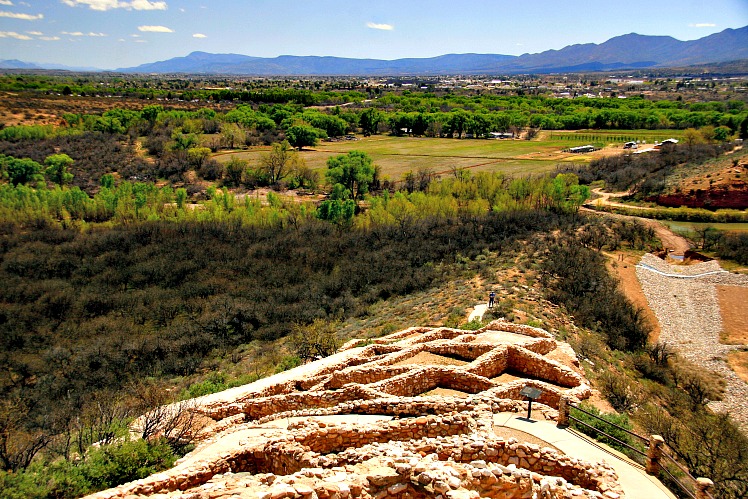 Crowning a desert hilltop is an ancient pueblo. A child scans the desert landscape for the arrival of traders. What riches will they bring? What stories will they tell? From the rooftop of the Tuzigoot pueblo it is easy to imagine such a moment.

Built atop a small 120 foot ridge is a large pueblo. Tuzigoot is Apache for crooked water; however, it was built by the Sinagua. With 77 ground floor rooms this pueblo held about 50 people. After about 100 years the population doubled and then doubled again later. By the time they finished building the pueblo, it had 110 rooms including second and third story structures and housed 250 people. An interesting fact is that Tuzigoot lacked ground level doors having roof-accessed doors instead. The history of Tuzigoot goes back well before the pueblo was constructed and we’re here to tell you the story.

Our story begins 10,000 years ago. Hunters and gatherers passed through the lush Verde Valley in search of food. Human occupation of the Verde Valley can be traced back to about 700 when people lived in pit houses. Two Native American tribes, the Hohokam (“those who have gone”) and the Northern Sinagua (“those without water”), lived in the valley and directly influenced the Sinagua that lived at Tuzigoot. The Hohokam were excellent farmers and grew corn, beans, squash, and cotton. They even used irrigation canals. The Northern Sinagua Indians are credited for the buildings which were built in 1125. Built along the Verde River resources were plentiful. The peak time of Tuzigoot and Montezuma Castle came in the 1300s.

Mysteriously however, in 1400, the Southern Sinagua (who mainly inhabited Tuzigoot) left. Reasons for moving may include over population, consumption of resources, disease, drought, or even conflict with other tribes. For whatever the reason was, the Sinagua moved south into Hohokam villages.

After the people left the pueblo stood empty until the early 1930s when it was excavated by archeologists and then turned into a national monument on July 25th, 1939.

The pueblo shows us this ancient village built by the Sinagua people. The people who built and lived in the rooms of the Tuzigoot pueblo were part of a thriving community of farmers with trade connections stretching hundreds of miles. Their lives were part of a vast and complex society and they had a deep understanding of the world around them.

The site is currently comprised of 42 acres that includes the hilltop pueblo, cliffs and ridges in the valley, and the Tavasci Marsh, a natural riparian area surrounding an old curve of the Verde River. A paved, fully accessible trail takes you through the pueblo giving you a good idea of what it would have looked like. Though the views from the ruins alone are worth the walk, one room is reconstructed and you can enter it and see what it would have looked like when inhabited.

Explore the Tuzigoot museum which highlights ceramics, textiles, and tools found during the excavation of Tuzigoot pueblo. Spend time with a ranger and learn about the Sinagua and the lives they led in the Verde Valley.

Tavasci Marsh lie adjacent to the pueblo in an ancient oxbow isolated from the Verde River nearly 10,000 years ago. The marsh is primarily fed by Shea Spring located in the limestone beds on the northernmost edge of this ancient meander. These perennial wetlands have attracted people, plants, and animals for thousands of years.

Tavasci Marsh is one-of-a-kind hiking or birding experience. Hike down the steep dirt road into the bottom land which is the marsh. You are there but turn right and keep on going along the marsh through a small grove of cottonwoods and emerge onto a grass land area. Bear left through the grassland and find a foot bridge which crosses the exit ditch for the marsh. Once there, you might want to take a very short walk over to the Verde River for a beautiful view. Once you cross the foot bridge turn left on the old dirt road and you will join the trail down from Dead Horse Ranch State Park. Keep hiking until you get to where the trail narrows and eventually you will find yourself at the observation platform and the end of the trail.

Tuzigoot can be found in Clarkdale, Arizona, just west of Montezuma Castle and just north of Jerome. Visiting Tuzigoot is definitely worth your while!

Fees: $10/adult; fees are valid for 7 days at both Tuzigoot and Montezuma Castle National Monuments

Why go: This extensive Sinagua pueblo sits on a scenic hilltop with views of Jerome, Dead Horse Ranch State Park, and the Verde Valley. Check out the artifacts inside the visitor center.

Don’t miss: A paved trail loops around the structure, going in and out of some rooms making it easy to understand how people would have lived, played, and farmed here.

Along the way: Cottonwood is a wine lover’s destination. There are four tasting rooms on Main Street in Old Town and several wineries and tasting rooms are a short drive away in Page Springs, Jerome, and Clarkdale.

Getting there: Tuzigoot is 90 miles north of Phoenix.