Stroll the quaint downtown streets of Breaux Bridge, Louisiana and you’ll find yourself transported back to a time when life was less hectic 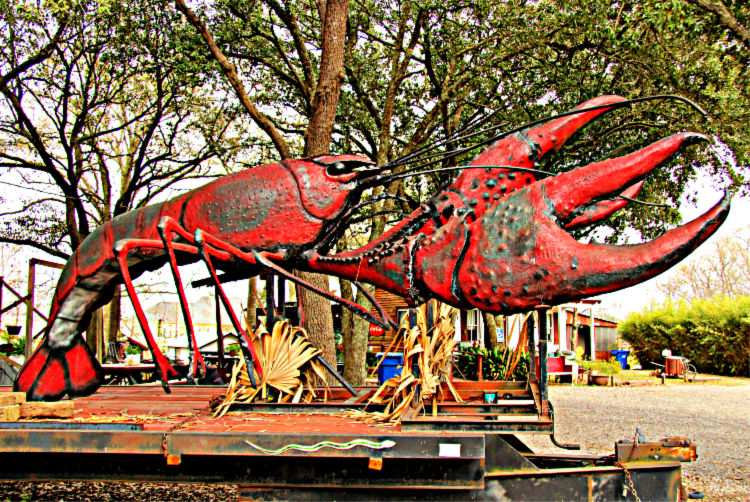 Nestled along the banks of the slow-rolling Bayou Teche, Breaux Bridge, the “Crawfish Capital of the World,” is a gorgeous historic town with world-class restaurants and a thriving Cajun music and folk art scene. Conveniently located just off I-10 at Exit 109, three hours east of Houston and two hours west of New Orleans, Breaux Bridge is a great place to stop off for a meal and an afternoon of antiquing, and an even better place to camp at a local RV park and stay awhile.

The bridge itself isn’t much to see (though you can’t miss it)—it’s a tall, slightly rusty metal drawbridge that spans the Teche (pronounced “tesh”). The downtown stretch of Bridge Street, though, is adorable. Antique shops, boutiques, art galleries, and restaurants span several blocks, and strolling the length of the strip can easily fill an afternoon.

The origins of this charming town date back to 1771 when Acadian pioneer Firmin Breaux bought land in the present-day city of Breaux Bridge and in 1799 built a suspension footbridge across the Bayou Teche to help ease the passage for family and neighbors. Area residents and visitors soon knew of the bridge and began calling it “Breaux’s bridge”, later adopted as the city’s name.

The town received its official founding in 1829 when Scholastique Picou Breaux drew up a plan called Plan de la Ville Du Pont des Breaux. The Catholic Church parish was created in 1847 and Breaux Bridge was officially incorporated in 1859. Back in 2009 Breaux Bridge celebrated its 150th birthday.

Breaux Bridge is the gateway to authentic Cajun culture in south Louisiana with traditional Cajun and funky Zydeco music, world-famous cuisine, and a rich history filled with interesting stories. Breaux Bridge is home of the world famous Breaux Bridge Crawfish Festival every May, where thousands converge on the little city to pay homage to Louisiana’s famous crustacean.

The annual Breaux Bridge Crawfish Festival is the town’s largest attraction. Taking place each year on the first weekend of May (April 30-May 2, in 2021, this down-home festival is an ode to the humble mudbug, one of the area’s major exports and a favorite for Cajun food lovers.

With three stages featuring the most popular Cajun and Zydeco musicians in the region, dozens of food vendors cooking crawfish (and other Cajun favorites) in every way you can imagine, a midway with rides and games, and more activities like crawfish races and crawfish eating contests, it’s a one-of-a-kind event that’s worth a trip.

Smaller events take place in town several times a year. The Tour du Teche, a large paddling race that takes place over three days each October and stretches the entire length of the Bayou Teche, passes through town. The annual Breaux Bridge Cajun Christmas Parade takes place the first Sunday after Thanksgiving and rings in the Christmas season with a Louisiana flair.

Just outside of Breaux Bridge is the gorgeous Lake Martin, a wildlife-filled preserve and rookery that’s protected and administrated by the Nature Conservancy. You can drive or walk along the edge of the lake and see alligators, egrets, herons, roseate spoonbills, nutria, and many more critters of various sizes hiding among the bald cypress and water lilies. There are several tour operators offering boat tours: Champagne’s Swamp Tours dock right at the entrance to Rookery Road and offer an eco-friendly tour experience. You can also rent canoes and kayaks and take your own trip around the lake.

Just a bit further out of town, in the neighboring hamlet of Henderson, you’ll find access to one of the largest swamp ecosystems in the United States, the Atchafalaya Basin. McGee’s Landing Basin Swamp Tours take you into the basin for a look at some of the plant and wildlife that thrive in its murky waters, including the aforementioned gators and water birds. And it goes without saying, the fishing’s great here and in Lake Martin. They don’t call Louisiana the Sportsman’s Paradise for nothing.

Scenic byways through this part of the state offer visitors a unique experience of the Cajun and Creole lifestyle. They are selected for their recreational, scenic, historic, cultural, archeological, and natural resources. Your senses are inundated with sights, sounds, and tastes that could only come from south Louisiana. Breaux Bridge is part of Bayou Teche Scenic Byway which winds through south Louisiana’s lush swamps and moss-draped bayous.

What we admire—and secretly covet—is their love of good food combined with a zest for life that they proudly call joie de vivre.