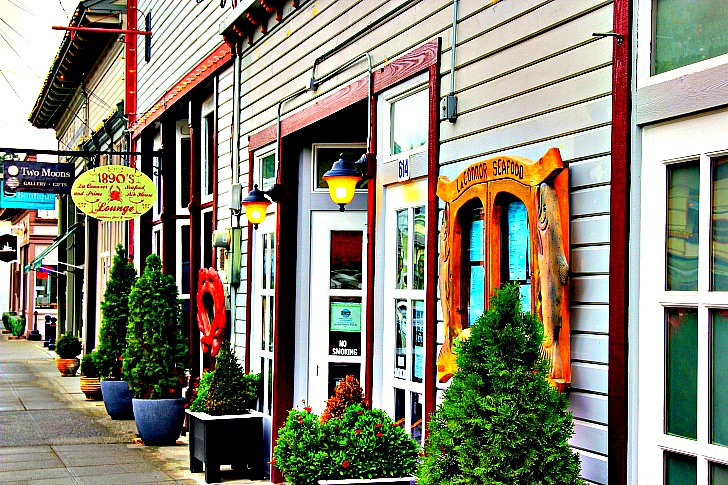 We’ve all been spending a lot more time daydreaming about all the places we want to visit this spring. Small town, big personality! The season of road trips is almost among us and sometimes the best places to go are the ones that are a little more under the radar. Check out these small towns in America that are just brimming with charm.

Nestled along the banks of the slow-rolling Bayou Teche, Breaux Bridge, the “Crawfish Capital of the World,” is a gorgeous historic town with world-class restaurants and a thriving Cajun music and folk art scene. Breaux Bridge is a great place to stop off for a meal and an afternoon of antiquing, and an even better place to camp at a local RV park and stay awhile. The bridge itself isn’t much to see (though you can’t miss it)—it’s a tall, slightly rusty metal drawbridge that spans the Teche (pronounced “tesh”). The downtown stretch of Bridge Street, though, is adorable. Antique shops, boutiques, art galleries, and restaurants span several blocks.

The second-oldest city in Kentucky, Bardstown has other claims to fame: as the “Bourbon Capital of the World”, home My Old Kentucky Home of Stephen Foster fame, and Old Talbott Tavern, the oldest stagecoach stop west of the Allegheny Mountains, dating to 1779.

Bardstown is a popular starting point for the Kentucky Bourbon Trail. But booze aside, the town has plenty of allure with its picturesque and quaint courthouse square.

La Conner is one of those places that people love to visit—time and time again. The reasons are many, but one that stands out is that there are so many things to do in—and around—La Conner. A waterfront village in northwestern Washington, La Conner is nestled beside the Swinomish Channel near the mouth of the Skagit River. La Conner is a unique combination of fishing village, artists’ colony, eclectic shops, historic buildings, and tourist destination. Relax by the water, enjoy fine restaurants, browse through unique shops and art galleries, and visit the beautiful tulip fields of Skagit Valley.

The heart of Pennsylvania’s Dutch community can be found in Lancaster which famously acted as the state capital from 1799 to 1812. The local farms mean lots of amazing food and fresh produce which can be found at Lancaster Central Market (the U.S.’s oldest public market). The town is also the starting point for the Lancaster County Art Gallery Trail which travels through several nearby towns and showcases the area’s most interesting (and affordable) art.

Marietta is a small city that lies right along the Ohio River in southeast Ohio.  While little in size and numbers, it’s bursting with local attractions. The downtown is lined with cozy shops and great restaurants—there’s even an historic bridge to take you over to Harmar Village. Marietta was the first permanent settlement in the Northwest Territory.  Founded in 1788, Marietta was named in honor of France’s Marie Antoinette showing thankfulness to France for their contribution to a US victory in the Revolutionary War.

Corning is part of the Finger Lakes region of New York. Wineries and breweries: check. Panoramic views of a gorgeous lake: check. Restaurants filled with top-notch food: check. The Corning Museum of Art is celebrating 50 years and welcoming visitors in a unique way. This southern Finger Lakes community offers something for everyone. Spend time at the Corning Museum of Glass and the Rockwell Museum.

With a gorgeous backdrop of red sandstone formations which appear to almost glow in reds and oranges during sunrise and sunset, Sedona is a perfect destination for photographers or outdoorsy people alike. Take in the majestic views from the Chapel of the Holy Cross, a church built on a 1,000 foot red rock cliff. Hike out to Cathedral Rock or check out the Red Rock Scenic Byway. You can always do an off-roading ATV tour at Red Rock Jeep Tours if you are feeling adventurous, or hike out along the West Fork Oak Creek Trail.

Angels Camp is named after Henry Angel, a shopkeeper from Rhode Island, who opened a trading post here in 1848—a short time before placer gold was discovered. In 1864, Samuel Clemens wrote his first successful short story, “The Celebrated Jumping Frog of Calaveras County” based on a tall tale he was told at the Angels Hotel by local, colorful character, Jim Smiley (or so the legend goes). The story launched his career as Mark Twain and put Calaveras on the map. The town has kept the allure of the Gold Rush era alive with many of the 19th century buildings housing eateries and unique shops in the charming historic downtown.

Houston and Austin can quibble all they want about who has the best barbecue, but the clear winner is Lockhart. This small town 35 miles south of Austin is the Barbecue Capital of Texas—and that’s not just a municipal marketing ploy. The Texas State Legislature passed a resolution in 2003 officially giving Lockhart the title. Hundreds of thousands of people make the trek to Lockhart every year where four barbecue joints cook up mouth-watering meats made by legendary pitmasters. Here, meat is served in boxes by the pound and eaten off butcher paper on long, wooden tables.

Resting at the foot of the Peaks of Otter in the heart of Virginia’s Blue Ridge Mountains and only 9 miles from the Parkway, Bedford is surrounded by some of the most beautiful scenery in Central Virginia. The town is home to several historic landmarks including the National D-Day Memorial, the Elks National Home, and the Avenel Plantation. Nearby, visitors have a wide range of attractions: Thomas Jefferson’s Poplar Forest, Smith Mountain Lake, the Blue Ridge Parkway and the Peaks of Otter, and the Sedalia Center for the Arts. There are a dozen wineries within a short drive out of the town and plenty of antiquing, horseback riding, hunting, fishing, and other outdoor sports.