A four-story structure of mud and wood, the Great House, is all that remains of a community of Hohokam people who lived here during the 14th century 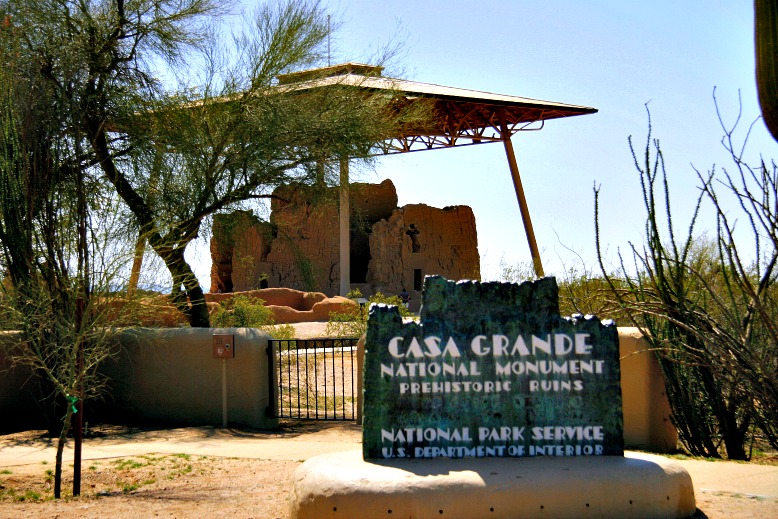 Casa Grande Ruins National Monument contains an imposing four-story building dating from the late Hohokam period probably 14th century and contemporary with other well preserved ruins in Arizona such as the Tonto and Montezuma Castle national monuments. It is situated in the flat plain of central Arizona between the Gila and Santa Cruz rivers just north of Coolidge and about 15 miles east of Casa Grande. The structure was once part of a collection of settlements scattered along the Gila River and linked by a network of irrigation canals. The area has a low elevation and is very hot—often over 110 degrees for several months in the summer. Even in winter, daytime temperatures can reach 80.

Guided tours are offered from late November to mid-April. Tours meet in the shaded Interpretive Ramada located immediately outside of the visitor center’s rear doors. While you are seated for the introduction the guide will explain the history of the ruins, the archeology, and the Hohokam Culture. Your guide then leads the tour into Compound A and points out interesting features. You may enter or leave the tour at any point or you may chose to visit the park on a self-guided tour. There are signs and exhibits to enhance your visit with volunteers and staff eager to hear your stories and discuss your questions. Tours are wheelchair friendly.

The Great House can be seen from some distance away owing to the flatness of the terrain and the rather curious appearance from a distance—the structure is protected from the harsh desert sun by a large metal roof supported by four great pillars designed by architect Frederick Law Olmsted Jr. This is an impressive design made necessary to help preserve the building but it is still rather incongruous. The present cover replaced an earlier wooden construction in 1932.

The scale of the ruin is best appreciated from close up—it is 60 feet by 40 feet wide at the base and has caliche walls over three feet thick. Although visitors are not allowed into the building owing to its delicate state and for safety reasons, much can be seen from outside including details of the construction with wooden beams supporting the clay walls and various internal features such as stairways and windows. However, besides the protective canopy, the interior contains other modern items such as re-enforcing beams, metal ladders, and measuring devices on the walls, all contributing to the slightly unnatural scene.

Built by the ancestors of the present-day O’odham people the site was an ancient farming community and according to the oral history of their descendants, a ceremonial center. Walk through the indoor museum to learn about the ancient people of the desert who lived here and their ingenuity in making a life in the Sonoran Desert. Then walk through the site and experience the desert yourself.

It is believed that the Casa Grande functioned partly as an astronomical observatory since the four walls face the points of the compass and some of the windows are aligned to the positions of the sun and moon during the solstice. There are various smaller ruins to explore the remains of a Hohokam farming village and some are yet to be excavated. A second, similarly sized compound is located 850 feet northeast of the Casa Grande though this is usually closed to the public. Nowadays, the roof and walls of the main building provide shelter for several species of birds most notably a great horned owl.

The Hohokam themselves seem to have abandoned the complex around the 16th century. Apart from other Indian peoples and Spanish missionaries the area was not revisited until the 1880s when American settlers arrived and began to threaten the ruins by removing artifacts as souvenirs. In 1892, the Casa Grande became the first archaeological site in the US to be protected.

Explore the mystery and complexity of an extended network of communities and irrigation canals. An Ancestral Sonoran Desert People’s farming community and Great House are preserved at Casa Grande Ruins. Whether the Casa Grande was a gathering place for the Hohokam or simply a waypoint marker in an extensive system of canals and trading partners is but part of the mystique of the Ruins.

Fees: No fee is currently charged

Operating hours: Limited Hours Due to Covid-19; check with the park before planning a visit

Why go: The Hohokam were expert farmers who developed a network of 1,000 miles of canals to channel water from the Salt and Gila rivers. The monument preserves structures that are 700 years old.

Don’t miss: The tallest building is four stories high and covered with a shade structure to protect it from further deterioration. Based on holes in the walls that correlate to the path of the sun during the solstice it’s believed the building was used, at least partly, to study astronomy. Guided tours are available in the cooler months.