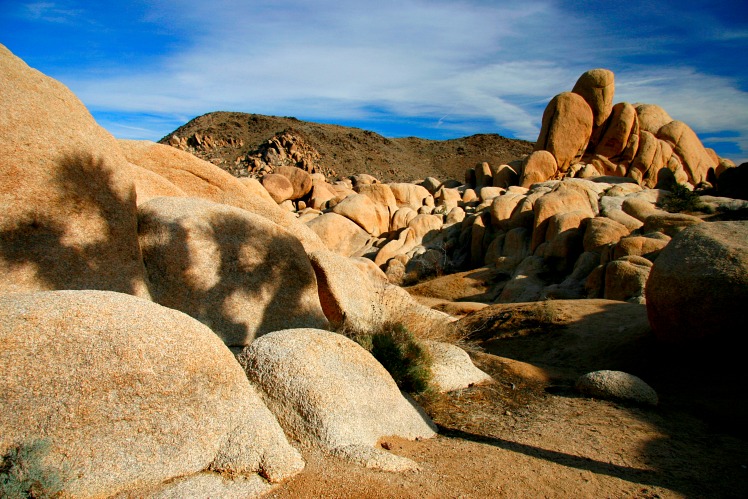 California’s Mojave Desert has inspired a number of monumental artistic endeavors including the fictional planet Tatooine in Star Wars and the iconic U2 album The Joshua Tree. But Joshua Tree National Park which lies within the boundaries of the Mojave has a landscape and special magnetism all its own. People come to Joshua Tree for their own special reasons. Sometimes it’s wilderness. Other times people come here for the music history, the diversity of raptors, or the epic landscapes. People come to Joshua Tree to find themselves. And find yourself you will—whether you’re hiking, biking, rock climbing, camping, stargazing, or daydreaming about selling all your stuff to move to the desert. Here’s how to do it all on your next trip.

Joshua Tree is open (and beautiful!) year round. Come in the spring or fall for the best weather (but keep in mind, the park gets extra busy January through April). If you visit in the hot summer months, plan outdoor activities early in the morning or later in the day when the air is cooler just to be safe. Most people spend four hours in the park according to park rangers. But Joshua Tree’s abundance of jaw-dropping geological and ecological sights mean one could spend days exploring the otherworldly landscape.

Fuel up in the funky artist towns nearby

There are over 100 miles of roads within the park and not a gas station in sight so fill up beforehand. The quirky towns surrounding the park—especially Joshua Tree, Twentynine Palms, and Yucca Valley—are also your best bet for grabbing a bite and a beer after a long day in the park. Populated by UFOlogists, solitude seekers, antique dealers, and offbeat creatives drawn to the desert, there are plenty of unusual adventures to be had in town. Definitely swing by Pioneertown which served as a film set for Old Westerns in a past life and today houses the area’s most famous bar and music venue, Pappy & Harriet’s.

Getting into Joshua Tree National Park

The park’s larger than Rhode Island which means there’s a lot of ground to cover. Of the three main entrances, the Joshua Tree entrance (known as the West Entrance) is often the busiest. The North and South Entrances near Twentynine Palms and the Cottonwood Visitors Center, respectively, are less crowded. Get there early; parking lots often fill up by mid-morning.

Just drive up to one of the park’s entrances and pay at the booth. A seven-day vehicle permit runs $30. Alternatively, $55 gets you a pass valid for a full year—OR, if you think you’ll visit more than one national park in the next 12 months (and you should!), NPS offers an $80 pass that buys you entry to any park for a year.

Once you’re all geared up with hiking boots and as much water as you can carry (seriously, it’s hot, especially in summer), it’s time to hit the trails. Skull Rock Nature Trail is one of the most popular in the park. From the Jumbo Rocks Campground, it’ll take you winding through about 1.7 miles of desert until you arrive at Skull Rock, an enormous boulder with two eye sockets carved into it by years of water erosion. It’s a pretty mild route and great for beginners.

The second trail you should hit is the Wonderland of Rocks which lives up to its name. Pebbles, stones, and giant boulders are yours to traverse for 5.5 wonderful miles. Given the terrain, it’s considered a difficult trail so be sure you’re up to the task.

Around sunrise or sunset, wander over to Keys View, the highest lookout point in Joshua Tree at 5,187 feet. You can look out across the Coachella Valley and see as far as the Salton Sea and Palm Springs on clear days.

Check out the unparalleled plant and animal life

I’ll assume you know the park’s tall and spiky namesake: the Yucca brevifolia, more commonly known as the “Joshua Tree.” In Spanish, the tree is known as izote de desierto, or desert dagger, which pretty much sums it up. It’s important to remember that since these trees are native to this 1,235-square mile expanse of desert, they’re strictly protected—aka, no touchy!

Visit the Cholla Cactus Garden to walk amongst hundreds of beautiful cholla. This flat loop leads hikers through nearly 10 acres of landscape dominated by the teddybear cholla. Swaying in the desert breeze they almost resemble coral (and, much like coral, should be left alone). A word of advice: do not attempt to pet this teddybear. The stem-joints can easily detach and hitch a ride due to the miniscule barbs on the spines giving it the nickname “jumping cholla.” Once they’ve latched on the spines are very painful to remove.

You’ll also spot the ocotillo (pronounced oh-koh-TEE-yoh), one of the most curious and unique plants of the southwestern United States. Ocotillos produce clusters of bright red flowers at their stem tips which explain the plant’s name. Ocotillo means “little torch” in Spanish.

Joshua Tree National Park is known more for its flora than fauna but there’s also plenty of wildlife in and around the park. Birding is especially popular with native species like roadrunners, raptors, and migratory flocks as well. Predators like bobcats, coyotes, and snakes also roam these parts, and—lest we forget—keep an eye out for our adorable friend, the desert tortoise!

Whether you’re brand new to climbing or navigate cliffs like a baby mountain goat, Joshua Tree’s 9,000+ climbing routes means that everyone’s welcome to give it a go. I also feel the need to note that most of the routes have truly creative names; take, for example, Yabba Dabba Don’t (15-foot climb), Breakfast of Champions (170-foot climb with 2 pitches), Room to Shroom (80-foot climb), Dangling Woo Li Master (100-foot climb), and so on.

For a route best suited to beginner and moderate climbers, head over to the Quail Springs area, home to the ever-charming Trashcan Rock, one of the most popular climbing spots due to its relative ease and the cool shade that covers it during the afternoon. Intersection Rock also makes a great spot for novices and The Eye ends with a tunnel that opens up onto excellent views across the desert.

Look up at the stars

Where to bed down at night

Of the 520 campsites in Joshua Tree National Park about half are first-come, first-serve. The others accept reservations through Recreation.gov.

What to bring and other essential tips

Sunscreen and water are must-haves year-round. The National Park Service stresses that there are no water sources inside the park, so again, pack a lot of water… and then pack even more. Binoculars, sturdy hiking shoes, snacks, a flashlight, a camera, and wide-brimmed hat (I recommend a Tilley) are also suggested.

To avoid being one of the approximately 60 search-and-rescue operations Joshua Tree sees every year, explore the park with a buddy and always let people know where you’re going. Cell phones don’t work in most of the park so if communication is crucial bring a satellite phone and a printed map to get around.

Over 80 percent of Joshua Tree is officially designated wilderness—emphasis on wild. Be respectful of wildlife to avoid tangling with an angry critter. And if you remember one thing about your visit to Joshua Tree National Park, it should be “leave no trace.” Be sure to leave the park as pristine as you found it to help preserve its natural beauty for generations to come.

name, where the streets have no name …