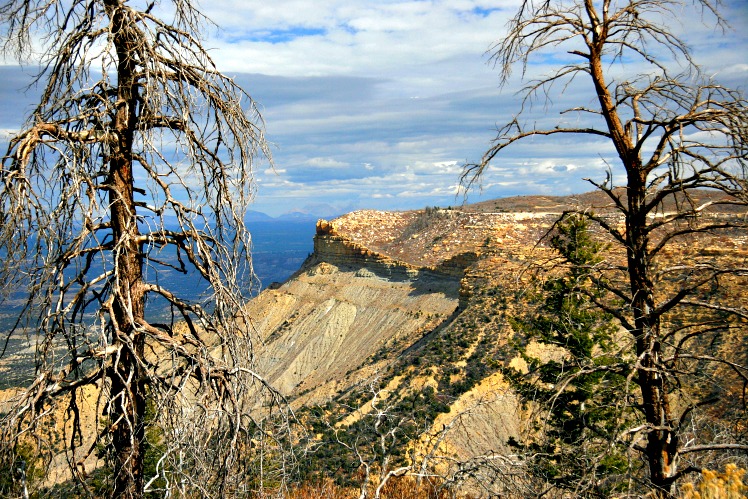 Far too often we consider the roads that we travel purely as a means to get from point A to point B. Most spend far more hours in their cars commuting and running errands than truly enjoying what lies beyond the edge of the asphalt or concrete. But once you hit the road in your recreational vehicle, why not get off the roads most traveled and take in the breath-taking splendor of America’s system of scenic byways?

Take your time and savor the sights—and along much of the route…the silence. Attempt this 482-mile drive (366 miles in Utah; 116 miles in Colorado) in a single day or two and you’ll miss the point. This landscape took thousands of years to create; you’ll never appreciate it at 65 miles per hour. Instead, take a week or more, stopping to walk through the numerous parks, preserves, monuments, and unnamed places whose beauty defies categorization. Start at any point along the route.

The Trail of the Ancients National Scenic Byway enters Utah east of Monticello on U.S. Highway 491 and continues to the junction in Monticello with U.S. Highway 191. Turn south onto U.S. 191 and travel to Blanding where you’ll find Edge of the Cedars State Park and Museum, a good stop for an introduction to the Ancestral Puebloan (Anasazi) pre-history of the area. Visitors can walk the paths through the ruins and climb into the kiva via a ladder, just as the original residents did. Exceptionally rare and well-preserved artifacts are at the heart of the museum exhibits.

From Blanding the route follows U.S. Highway 191 south to the junction with Utah Highway 95 and continues west on Highway 95 to Utah Highway 261 passing Butler Wash Ruin, Mule Canyon Ruin, and Natural Bridges National Monument. Butler Wash Ruins, about 10.5 miles west of Blanding, has cliff-type dwellings located under rocky overhangs in a lush green valley along the river. An easy half-mile hike allows closer views. Eight miles further west along Highway 95 brings you to Mule Canyon Indian Ruins at milepost 101. Adjacent to the road, the site contains dwelling units, a reconstructed open kiva, and round tower—all made of stone.

Just a few more miles and you’re at Natural Bridges National Monument about 35 miles west of Blanding. Located atop a 5,500- to 6,500-foot mesa a nine-mile, one-way, paved loop road winds through the park, revealing spectacular views of deep pinyon-filled canyons with scattered ancient cliff dwellings and three of the world’s largest natural stone bridges. Bridges differ from arches in that they are created primarily by stream action; whereas arches are created primarily by rain and wind.

The bridges in this monument are all easily viewed from overlook areas along Bridge View Drive, or you can hike down into the canyon and walk under them. Interpretive signing is present at each overlook. Horsecollar Ruin Overlook Trail is mostly level and leads over the mesa to the edge of White Canyon. The small cliff dwelling is unique in that it is still plastered. The doorways to the two granaries are shaped like the horsecollars used in harness equipment. A small campground is limited to RVs less than 26 feet but an overflow area on the edge of the park has plenty of room.

From Natural Bridges National Monument, the Trail of the Ancient Scenic Byway turns south at the junction with Highways 95 and 261. Along this route you’ll find access to Grand Gulch Primitive Area and hiking trails on the mesa top. Prior to dropping off the Moki Dugway is County Road 274, a 5-mile remote dirt road leading to Muley Point which has been listed by National Geographic as one of the most outstanding views in America. From its magnificent overlook you’ll peer deep into the San Juan River Canyon and onto Monument Valley 25 miles or so in the distance.

The infamous Moki Dugway is a 3-mile stretch of unpaved road that descends 1,000 feet down tight switchbacks from the edge of Cedar Mesa into the Valley of the Gods. The dugway itself is a historic part of the trail, built during the uranium boom to accommodate ore trucks that traveled from the mines on Cedar Mesa to the mill near the Navajo community of Halchita across the San Juan River from Mexican Hat. Never planned for public use, Moki Dugway is not recommended for RV travel.

From the bottom of the Dugway our journey continues past the entrance to the little-known Valley of the Gods and onto the junction with Utah Highway 316 which leads to Goosenecks State Park. Although Valley of the Gods is not listed as a site on the Trail, it is worth visiting. The 17-mile loop drive on a native surface road leads among sandstone monoliths which have been given fanciful names such as Seven Sailors, Southern Lady, Rooster Butte, and Battleship Butte.  The valley allows a close-up look at towers and mesas of multicolored sandstone and other sedimentary rocks in subtle shades of pink, red, gold, orange, and purple. The sandstone monoliths here are reminiscent of Monument Valley. This route puts travelers on Highway 163, between Bluff and Mexican Hat.

Goosenecks State Park is another adventure in geology revealing the skeleton of the earth in the layers formed by the San Juan River 1,000 feet below. The Goosenecks of the San Juan River is one of the most striking examples of an “entrenched river meander” in North America. Like a snake the river twists and turns and coils back on itself for a distance of over six miles while advancing only 1.5 miles west as it flows toward Lake Powell. Over 300 million years of geologic activity is revealed from Goosenecks State Park. Located at the end of Highway 316, Gooseneck is a wilderness park encompassing 10 acres.

Utah Highway 261 continues to the junction with U.S. Highway 163 and the town of Mexican Hat. Founded in the early part of the 20th century during an oil boom, Mexican Hat has a population of less than 100 and functions mostly as a stopover point for visitors on their way to Monument Valley or as a base for river expeditions.

At the junction turn right to enter Mexican Hat and on to Monument Valley Navajo Tribal Park where sandstone buttes, mesas, and spires rise majestically from the desert floor. Monument Valley offers the quintessential Western backdrop made famous in countless Western movies directed by John Ford. An unpaved, and at times rough, road loops through the park. Several overlooks offer spectacular views of the wonders of Monument Valley.

Monument Valley’s towers, which range in height from 400 to 1,000 feet, are made of de Chelly sandstone, which is 215 million years old, with a base of organ rock shale. The towers are the remnants of mesas, or flat-topped mountains. Mesas erode first into buttes like the Elephant, which typically are as high as they are wide, then into slender spires like the Three Sisters.

After exploring the wonders of Monument Valley retrace your route for 21 miles to Mexican Hat on U.S. Highway 163 and continue east to the pioneer-era town of Bluff on the edge of the Navajo Nation. Snuggled up against the San Juan River, the town was settled by the famous “Hole-In-The-Rock” expedition of Mormon pioneers in the 1880s. Continue past Bluff and travel east on Utah Highway 262 towards the town of Aneth and follow the signs to Hovenweep National Monument.

Known for its square, oval, circular, and D-shaped towers, Hovenweep National Monument protects six prehistoric clusters of Native American ruins. Established in 1923, the villages date from the Pueblo period of the mid 13th century. They are spread over a 20-mile area along the Utah-Colorado state line. Unlike the large ruins at Mesa Verde, these are approachable and the visitor can wander among the fallen walls and consider the people who built them.

From Hovenweep return to Aneth and drive southeast on Utah Highway 162 and Colorado Highway 41 to the Four Corners and northeast on U.S. Highway 160 to Ute Mountain Tribal Park. Part of the Ute Mountain Indian Reservation, the Ute Mountain Tribal Park has been set aside to preserve remnants of the Ancestral Puebloan and Ute cultures. The Park encompasses approximately 125,000 acres around a 25 mile stretch of the Mancos River. Within the park are hundreds of surface sites and cliff dwellings, Ancestral Puebloan petroglyphs, and historic Ute wall paintings and petroglyphs.

From Ute Mountain, drive north on U.S. Highway to Cortez and Mesa Verde National Park. Fourteen centuries of history are displayed at Mesa Verde National Park. Mesa Verde offers an excellent opportunity to see and experience the life of the Ancestral Puebloans. Spectacular cliff dwellings and mesa-top villages were built between A.D. 450 and 1300, when the Ancestral Puebloans migrated from the area.

The park is split into a series of sub-mesas all bearing different names. There are thousands of archaeological sites across the park and excellent interpretive loops and scenic pullouts. Hiking and climbing ladders in and out of cliff dwellings is one option, or walks through less rigorous self-guided routes are also available.

On this note we end our fascinating discovery of an ancient land of incredible beauty.

The real voyage of discovery consists not in seeking new lands, but in seeing with new eyes.