Thanks to the park’s varied terrain, you can choose between desert, mountain, and river hikes, or hop in your car and explore the park on four wheels 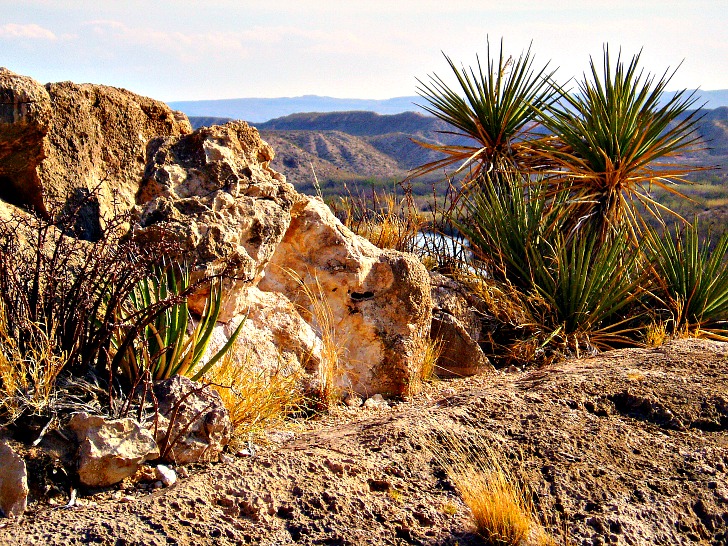 Big Bend National Park has it all—vast amounts of open space, rivers, canyons, pictographs, and hot springs. Located in southwest Texas, the park can be wonderfully warm in the winter and unbearably hot in the summer offering year-round access to some of the most beautiful terrain in the state. Big Bend National Park is where the Chihuahuan Desert meets the Chisos Mountains and it’s where you’ll find the Santa Elena Canyon, a limestone cliff canyon carved by the Rio Grande.

Big Bend National Park abuts the border with Mexico across a stunning stretch of southwestern Texas where evenings are defined by an orange sky and red canyon walls and where chirps of yellow meadowlarks and the sounds of the Rio Grande fill the air. While such stunning scenes are commonplace within Big Bend, the massive desert preserve remains overlooked among U.S. national parks—it has never surpassed 500,000 annual visitors since its designation in 1944.

The lack of tourists is likely due to the park’s extreme remoteness: Big Bend lies 300 miles from El Paso, the nearest major metropolitan area, and is geographically isolated within a massive turn of the Rio Grande from which the park gets its name. Those who brave the miles will find the journey is filled with natural riverfront hot springs, luminous night skies, and secluded mountain trails. Here is how to make the most of your trip to one of the more underrated national parks in America.

Pick the right season and give yourself plenty of time

With its southerly location and exposure to the elements, triple-digit temperature stretches in the summer months are not uncommon and threaten to turn the most well-intentioned hiker into a sweaty, sunburned mess. A better experience is found in winter and autumn but spring comes with the double bonus of long daylight hours and wildflower season. If you do go in the summer make sure to bring lots and lots of water, sunscreen, a wide-brimmed hat (I prefer a Tilley), and plan your excursions around the heat. Winters can also get surprisingly chilly—averages hover around 60 degrees but can dip into the forties—so dress warmly if you plan your trip in the colder months.

Big Bend is among the largest national parks in the United States. With numerous trails, mountains, canyons, and nearby villages to explore; each point of interest could easily yield itself to days of exploration. For the best experience resist making a set plan—allow yourself plenty of time to explore and discover each desert sanctuary at your own pace.

While the paved roads make it possible to explore much of the park’s natural beauty, many of the more obscure sights are hidden deep within the park’s interior on rough, dirt roads. To explore this rugged area bring a vehicle with four-wheel drive, plenty of ground clearance, and good tires.

Roadrunners, sparrows, and warblers are among the 450 species of birds found within Big Bend, home to more birds than any other national park. With a keen eye and a bit of luck, you can also spot jackrabbits, coyotes, black bears, mountain lions (known in Big Bend as panthers), and javelina—a hairier cousin to the familiar pig. Sunrise and sunset observations are recommended for optimal wildlife spotting and while the average smartphone may suffice take a camera capable of capturing the brilliant scenery at night.

This is dark sky country. Due to its relative isolation from major cities, this side of West Texas has some of the lowest levels of light pollution in the country. Thousands of stars are visible on a clear night and even the Milky Way can be seen under the darkest conditions earning it a designation by The International Dark-Sky Association. Consider bringing a telescope or simply lie down at night, looking up, and see what appears above.

The tiny, peculiar artistic town of Marfa is about 100 miles north of Big Bend. Here you’ll find the El Cosmico hotel with rooms consisting of brightly colored vintage trailers, tepees, and yurts. The town acts as a venue for the annual Trans-Pecos festival in September containing a weekend’s worth of art, building, and songwriting workshops, artisanal markets, pop-up parties, live music of all genres, and the tense yearly sandlot baseball showdown between Austin’s Texas Playboys and the Los Yonke Gallos de Marfa.

Travel 30 minutes north on U.S. 90 to find the famous Prada Marfa art installation in neighboring Valentine, a tiny, fake store isolated within the surrounding landscape and complete with actual Prada shoes and handbags from the fall 2005 collection. Try heading east about 10 miles to watch for the mysterious Marfa Lights off of U.S. 67. Sometimes they’re red, sometimes they’re green, and sometimes they’re white. Visible at night regardless of season or weather, nobody is quite sure what causes them.

From Marfa travel 30 miles east on U.S. 90 to the town of Alpine and take TX-118 for 80 miles due south to Terlingua at the gates of Big Bend. The remnants of a mercury mining camp from the early 20th century, the former ghost town has become known for its charming assortment of gift shops, earthy hotels, and its famous chili cook-off in early November. Check out the Terlingua Trading Company for handmade gifts and grab a bite of chips and guacamole and catch live honky-tonk music at the old Starlight Theater Restaurant and Saloon. Spend a few days at Paisano Village RV Park & Inn to further explore the area.

At the western end of the park coming from Terlingua, the Ross Maxwell Scenic Drive is perfect for single-day trips. The paved road covers 30 miles of gorgeous desert scenery including stops at landmarks such as Sotol Vista, Tuff Canyon, and Mule Ears. The road ends at Santa Elena, one of the numerous river canyons within Big Bend.

In the center of Big Bend lies the Chisos Mountains, the only mountain range in the United States fully contained within a single national park. Given their relatively high elevation—the summit of Emory Peak stands at 7,835 feet—the Chisos are typically 10 to 20 degrees cooler than the adjacent desert and home to a wide variety of shady juniper, mesquite, and oak. Within the 20 miles of trails here it’s a fairly easy hike to a beautiful view at the summit of Emory Peak. Camping is available here as well at the Chisos Basin Campground. If camping isn’t for you, try the stone cottages at the Chisos Mountain Lodge the only hotel within the park.

The eastern side of the park is home to Big Bend Hot Springs, a geothermally heated oasis now sitting within the remnants of an early 1900s bathhouse. Once a gathering place for locals, soak in the year-round 105-degree waters said to have healing properties and enjoy unobstructed views of the Rio Grande and into Mexico. A short trail passes Native American petroglyphs on the adjoining limestone cliffs and the still-standing Hot Springs Post Office where mail was delivered every Monday in the early 20th century.

What to know about camping in Big Bend National Park

When night falls, you’ll want to have an already reserved campsite so all you have to do is settle in. Here’s everything you need to know to secure that perfect Big Bend National Park camping spot.

There are four campgrounds inside Big Bend National Park—three park-operated camping areas with various services and one by an outside company. The three park-run campgrounds are Chisos Basin Campground, Rio Grande Village Campground, and Cottonwood Campground. All require advance reservations booked (up to 6 months in advance) through recreation.gov.

Chisos Basin Campground sits in a scenic mountain basin with views of Casa Grande and Emory Peak. There are plenty of hiking trails nearby, including Window Trail, a popular place to watch the sunset. The year-round campground has 60 sites with access to flush toilets, running water, and a dump station. There are no hook-ups, and trailers over 20 feet and RVs over 24 feet are not recommended.

The year-round Rio Grande Village Campground is nestled in a grove of trees near the Rio Grande. This is the place to go if you want access to more amenities—a store, laundromat, and visitor center are nearby. The park has 100 sites with access to flush toilets, running water, showers, and some sites with overhead shelters. A dump station is nearby.

The small Cottonwood Campground is more remote than the other campgrounds and has fewer services but tends to be quieter with plenty of shade. Cottonwood is a seasonal campground –(open November 1 to April 30) with 24 camp spots—all without hookups or generators.

How the park got its name: Big Bend was named for the prominent bend of the Rio Grande River that runs through it along with the United States and Mexico border.

Did you know? Big Bend has more species of scorpions (14) than any other national park, including some species that have been found nowhere else in the world.

Big Bend is a land of strong beauty—often savage and always imposing.