At one of America’s newer National Park, the possibilities for discovery are limitless 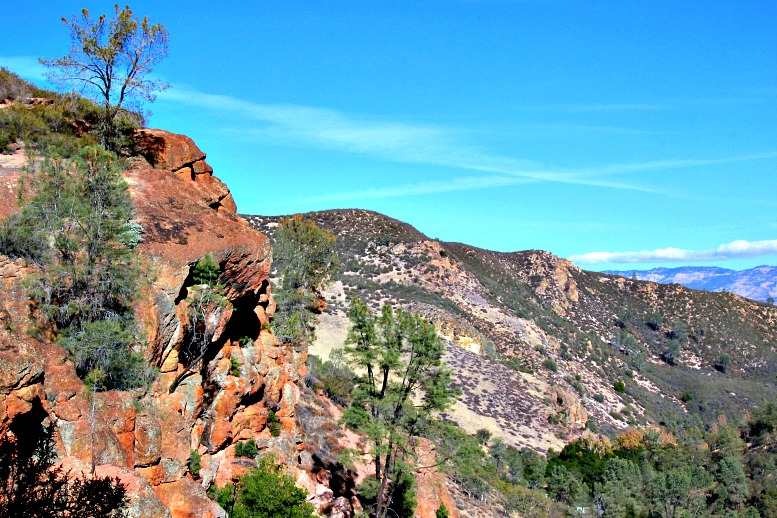 The remains of an ancient volcanic field consisting of massive monoliths, rocky spires, pinnacles, red crags, and talus cave, rise out of the Meditteranean chaparral-covered Gabilan Mountains, a sanctuary for the California condor.

The Salinas Valley in west-central California is the site of an ancient history spanning 23 million years. Over the course of that time, the “pinnacles” have migrated some 200 miles from their original home on the San Andreas Fault where the volcano that they were born from once stood. Today, that volcanic rock from the Pacific Coast Range has morphed to form monoliths, spires, peaks, cliffs, and other formations that jut out from the pastoral hills of the region.

The park is split into east and west districts between which there are no driving roads connecting the entrances on either side. In the west district, there are rare and unusual talus caves—caves made up of fallen rock sandwiched in slot canyons. On the east side, you will find the most interesting views of the formations along with broader views of the entire park landscape, the main park visitor center, and an established camping area. Both sides are beloved by technical climbers, day hikers, cave-goers, and bird watchers eager to catch a glimpse of the endangered California condor.

The first 2,500 acres of the rugged Pinnacles were made a national monument in 1908 by President Theodore Roosevelt. Since 1908, the monument significantly increased in size to 26,000 acres and on January 10, 2013, Pinnacles became America’s 59th national park.

By the early 1980s, the California condor population had dwindled to just 22. The birds were placed in captive breeding programs, and Pinnacles became one of the release sites. Other condors from the Big Sur area also frequent the area which increases the odds of seeing one of these rare creatures.

Remarkable rocks sculpted by 14 million years of volcanic turmoil. The rocky spires and pinnacles have long attracted rock climbers. So have talus caves (formed when massive boulders tumbled into narrow canyons) inhabited by protected bat communities. A well-maintained 30-mile trail system, partially created in the 1930s by the Civilian Conservation Corps, beckons hikers to this rugged landscape. Wildflowers bloom in the spring, and the temperate climate makes for year-round exploration opportunities.

The rock formations of Pinnacles National Park divide the park into east and west access points which are connected by trails. But, there is no road connecting the east and west entrances of the park.

The eastern access road (CA 146) branches off CA 25, 30 miles south of Hollister, and leads up a wide, partly wooded valley alongside Bear Creek, and past the park campground. The mountains are visible to the west though they seem unremarkable from a distance as the volcanic formations are hidden behind more conventional rocks.

Pinnacles Campground offers 149 tent, group, and RV sites with 30-amp electric service. Water is located throughout the campground. Showers and a dump station are available. During the spring and summer seasons, campers can enjoy the campground swimming pool and ranger programs at the campground amphitheater.

The road bends around a side canyon and ends next to the visitor center just as the main valley (Bear Gulch) starts to become relatively narrow. The center has exhibits, a small selection of books for sale, a public telephone, and flashlights for use in the caves.

The surrounding vegetation is typical of the chaparral zone, mostly small oak trees, and bushes, reflecting the low elevation, moderate rainfall, and long hot summers of this part of California. The main hiking area is to the west, further along, the canyon—within 2 miles are Bear Gulch Cave, Bear Gulch Reservoir, and many rock climbing sites, while 2 miles further are the extensive formations of the High Peaks. Many trails intersect, allowing for a short loop or a longer all-day hike.

The west entrance has just a ranger station plus parking and is reached by a narrow, 12-mile road from Soledad that is not recommended for RVs or other large vehicles. From the road’s end, three trails depart to the north, west, and east; the most popular routes are the Juniper Canyon Trail to the High Peaks, and the Balconies Trail which leads to volcanic rocks and a talus cave.

How the park got its name: In 1880, the area where the national park is now was known as “the Palisades” until a newspaper article came out in 1881 describing the trellised areas as “the Pinnacles.” Further exploration of the area and additional marketing of it as a tourist destination helped the new name to stick. It has been officially known as Pinnacles since it was protected as a National Monument in 1908.

Iconic site in the park: The geologic formations are known as “the pinnacles” are a series of volcanic and sedimentary rocks that have eroded over time to take the shape of colorful and ornate cliffs, crags, and talus cave formations that rise from a forested landscape.

Pinnacles, Muir Woods, and the Grand Canyon were all set aside as national monuments in the span of seven days in January 1908 by Teddy Roosevelt.

American writer John Steinbeck grew up in the Salinas Valley and lived there until he went to Stanford University in 1919. The location inspired several of his works, one of them being East of Eden.

May all your trails be crooked, winding, lonesome, dangerous, leading to the most amazing view……where something strange and more beautiful and more full of wonder than your deepest dreams waits for you.