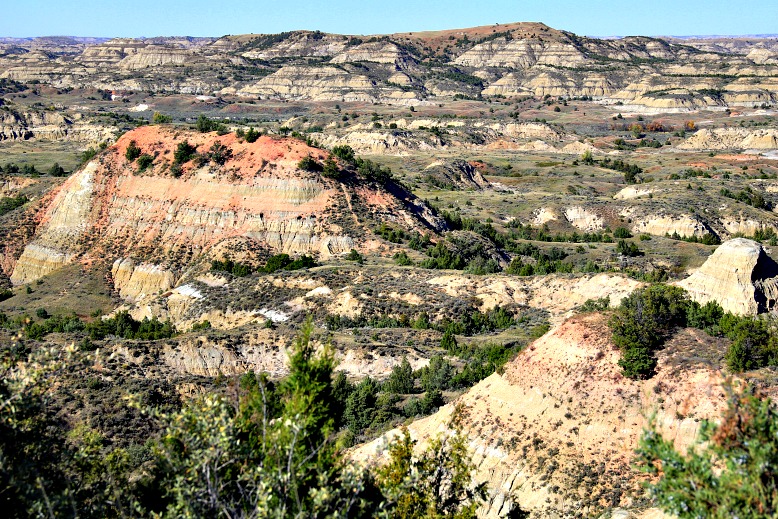 For RVers looking to visit all 50 states, North Dakota is often one of the last to be checked off. It’s not exactly on the way to anywhere else. Part of the challenge is deciding what to see and do once you get there.

In the end, the tiny town of Madora (population 132) and Theodore Roosevelt National Park won out. Photos of its badlands and prairies enchanted me, and the story of Teddy Roosevelt’s sojourn there following the deaths of his wife and mother on the same day intrigued me.

This park is a memorial to one man’s love of the American landscape. Theodore Roosevelt, the 26th president (1901-09), established five national parks and helped found the US Forest Service. His first cabin (Maltes Cross) is on park grounds and open for touring.

Three separate sections make up this park. They include a badlands area populated by bison, pronghorn, elk, wild horses, and bighorn sheep. Roosevelt, a New York native, found this land restorative and wrote extensively about his time in the West.

And he loved his time on the badlands so much he: a) bought a ranch and moved there, and b) was inspired to grow our national park system by signing the Antiquities Act. Eventually, his property became part of Theodore Roosevelt National Park.

What was it about this place that allowed this future president to grieve and recover—while at the same time inspiring him to become one of America’s most influential conservationists? I needed to see it for myself.

Teddy Roosevelt Park is open 24 hours daily. Map in hand, we drove the 36-mile scenic loop around the park’s South Unit, stopping at many of the nearly 20 points of interest along the way.

Within minutes, we came upon a prairie dog town. Dozens of the tiny creatures scampered back and forth, popping in and out of little holes amid scrubby grasses. We’d see three more prairie dog towns before we completed the loop, along with wild horses grazing on a hill by the roadside and in another spot, a herd of bison. The wildlife encounters were thrilling and unexpected surprises.

The landscape was thrilling too. The scent of sage perfumed the air, and bursts of red foliage punctuated the gray-green grasslands. Stripes of peach, cream, and mud-brown earth and stone-lined the curving banks of the Little Missouri River.

Framing it all were the famous badlands stretching to the horizon: flat-topped stone formations with striated slopes in tawny yellows and russet reds, dotted with bright green trees and patches of grass.

At every stop, we were awed by the scenery, from the astonishing palette of earthy hues to the stone shapes etching land and sky.

An exhibit at the visitor center tells Roosevelt’s story. On his first visit in 1883, he hunted bison and invested in a ranch near Medora.

He’d been a state assemblyman in his native New York, but after his mother and wife both died on February 14, 1884, he left politics and returned to the badlands to mourn his losses. He lived in a small ponderosa pine cabin now located just steps from the visitor center. It’s furnished with period pieces and some of his belongings, including his traveling trunk, a replica of his writing desk, and a rocking chair.

Roosevelt lived the cowboy life, spending days riding and herding in what was considered America’s last frontier. His experiences there were formative: He lost more than $24,000 when blizzards decimated the cattle he’d invested in. He witnessed the environmental damage done by overgrazing. And he realized that the bison, who once roamed the plains in the millions, had dwindled to the hundreds.

Roosevelt wrote three books inspired by his Western sojourn. He eventually returned to politics, serving as New York governor and from 1901-1909, as U.S. president. His accomplishments included the conservation of 230 million acres of land, a legacy that led to the creation of the National Park Service in 1916.

I hope someday to go back and absorb more of the place that Roosevelt called “a land of vast silent spaces—a place of grim beauty.”

How the park got its name: This park was named after President Theodore Roosevelt, the 26th President of the United States, who spent a considerable amount of time living in the Dakota Territory. The site where Theodore Roosevelt National Park is now located was selected after his death in 1919 to honor his dedication to preserving America’s wilderness. The land was set aside by an act of congress. He was known as the “conservationist president” for dedicating his life to obtaining federal protection for lands and wildlife species under threat. During his time in elected office, he established 5 national parks, 18 national monuments, 150 national forests, and 51 bird sanctuaries.

The establishment of the National Park Service is justified by considerations of good administration, of the value of natural beauty as a National asset, and of the effectiveness of outdoor life and recreation in the production of good citizenship.