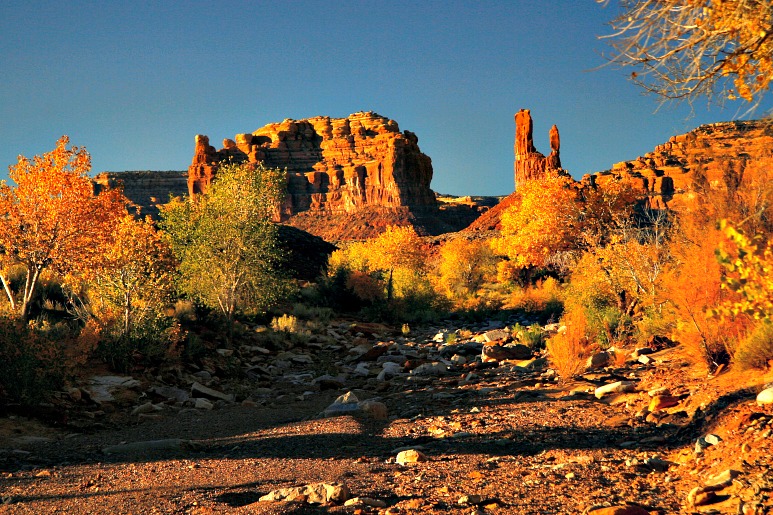 The beautiful Cedar Mesa sandstone monoliths, pinnacles, and other geological features of this enchanting area are known as a Miniature Monument Valley. These sandstone sentinels were eroded by wind and water over eons of time.

The 17-mile Valley of the Gods Road, also known as BLM Road 226, stretches between US-163 north of Mexican Hat, Utah, near the Arizona-Utah border, and Utah Route 261 just below the white-knuckle Moki Dugway. In the morning, enter from US-163 in the east. This way, the sunlight highlights the buttes. And, in the afternoon start from the west entrance off SR-261.

It’s just a simple non-descript green highway sign on US-163 in southeastern Utah near Mexican Hat: “Valley of the Gods.” Tighten your grip on the steering wheel as you drop down to ford the creek as the towering Seven Sailors Butte fills the earth to the sky. This is the eastern beginning to the twisting, climbing, and turning but readily accessible drive looping through a valley of 9dramatic red rock buttes, rolling desert landscape, and a smattering of brush and wildflowers.

Following the Seven Sailors greeting, Setting Hen and Rooster buttes loom large. This starts the stretch where the most scenic campsites are located. The road weaves its way north and west past buttes named Franklin and Battleship and then after making a steep turn at Castle Rock, two whimsical buttes are in view: Rudolph and Santa and Lady in a Bathtub. A simple drive-by brings you past more than 12 named buttes and spires and easily another dozen without names on various maps.

The massive red rock formations are a geology fan’s dream. Hoodoos, spires, buttes, buttresses, forming and collapsing arches, and towers are all visible along the drive. It’s a potpourri of Southwestern geology. To truly enjoy the experience, stop often at the many wide spots on the road. Get out and walk around and take some photos. Keep an eye peeled for roadrunners and coyotes—this is their home turf.

Valley of the Gods Road is graded gravel and clay. This two-lane road is passable in a conventional passenger car when road conditions are dry. A local inquiry should be made during and after periods of inclement weather.

Never enter a flooded wash if it’s not possible to discern depth and flow speed. When storm conditions are present over the Valley and north of Valley of Gods, watch for flash flooding. Lime Creek is the drainage for a large area including portions of Cedar Mesa. It can flood even if the Valley of the Gods is in the sunshine and blue skies. It takes only six inches of water and a 5 mph flow to float a passenger car—even a four-wheel-drive pickup truck—off the road and down the stream. Use common sense and caution.

This 17-mile loop through Valley of the Gods has sharp turns and crosses several washes. Taking the drive in a leisurely fashion, we stopped for photos, taking two to three hours to complete the loop.

There are many places to stop along the scenic drive and numerous locations suitable for FREE camping as the valley lies on BLM land and is completely undeveloped. Since hardly anyone seems to pass by, the area provides a much more relaxing and isolated experience than the famous valley (Monument Valley) 30 miles southwest, and without any of the restrictions on hiking or camping. The spacing between campsites and the low traffic volume through Valley of the Gods provides ample opportunity for privacy while camping.

Camping is available in the dozens of off-road graded areas BLM has prepared adjoining Valley of the Gods Road. Starting just before Setting Hen Butte and past Battleship Rock, the campsites are slightly hidden from the road and provide some privacy and distance from dust. Practice “leave no trace” camping techniques. There are no potable water and no restrooms or pit toilets. Be prepared for primitive camping and bring plenty of water.

Overnight stays allow a chance to explore the buttes and rocks at leisure, cross-country hike, and see a near-perfect dark sky reveal of the Milky Way. DarkSiteFinder’s map rates Valley of the Gods with its darkest sky measure.

There are no formal hiking trails. Hike with a map and compass. With a portable GPS, remember extra batteries and set the tracking feature. The ground surface tends to have loose small rocks, especially below and around the buttes which can be slick. Trekking poles are recommended along with a basic “watch-your-step” sense. Keep an eye open for rattlesnakes and other reptiles on large rocks or near crevices. Do not stick bare hands under a rock without checking for spiders, insects, or snakes. There are many things that sting and bite in the desert.

Small canyons cut into the cliffs that form the northern boundary of the valley and can be reached after a couple of miles of cross-country hiking. The entire region is excellent for photography, especially at sunrise and sunset when the rocks take on a particularly deep red hue.

Do not count on mobile phone signals anywhere throughout this portion of southeast Utah. There is mobile service from time to time but not that can be relied upon to be available when needed.

Time, geologic time, looks out at us from the rocks as from no other objects in the landscape.