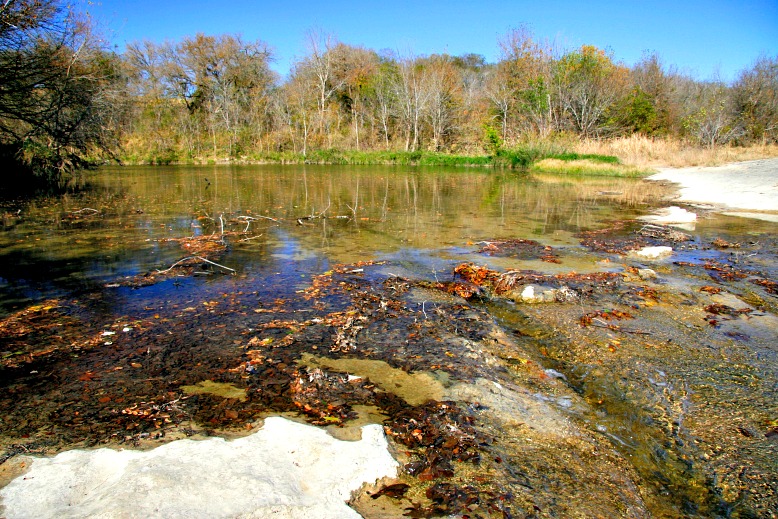 Listen to Onion Creek flowing over limestone ledges and splashing into pools. Follow trails winding through the Hill Country woods. Explore the remains of an early Texas homestead and a very old rock shelter. All of this lies within Austin’s city limits at McKinney Falls State Park. Think of the park as Austin’s backyard; it’s just 13 miles from the state capitol.

You can camp, hike, mountain or road bike, geocache, go bouldering, and picnic. You can also fish and swim in Onion Creek. Onion Creek can flood after rainfall. Beware of the creek’s flow; contact the park for current creek conditions. Youngsters can complete the Junior Ranger Activity Journal, which is available at park headquarters and may be downloaded from the website.

Hike or bike nearly nine miles of trails. The 2.8-mile Onion Creek Hike and Bike Trail have a hard surface, good for strollers and road bikes. Take the Rock Shelter Trail (only for hikers) to see where early visitors camped.

Go fishing in Onion or Williamson creeks. Bring your fishing poles to catch catfish, Guadalupe bass, white bass, and sunfish. You do not need a license to fish from shore in a Texas state park. Wear a wide-brimmed hat (I prefer a Tilley), sunglasses, and sunscreen to protect your head, eyes, and skin. Bring plenty of drinking water to prevent dehydration; soft drinks encourage dehydration.

Many people visit the park to see “Old Baldy,” a 500-year-old bald cypress tree that stands 103 feet tall and whose trunk measures 195 inches around. Bald cypress trees rule the park and are so named because they turn bright orange early in the fall and lose their needle-like leaves.

The area was inhabited more than 8,500 years ago as evidenced by artifacts left by American Indian tribes; which groups occupied this area remains a mystery. When Spain ruled this part of the United States in the 1600s major roads were constructed throughout Texas to encourage settlements.

By 1850, Thomas McKinney was living on this property along Onion Creek. The family ranch was located near one of these historic roads, El Camino Real de los Tejas. McKinney, a native Kentuckian, was one of the first colonists to relocate to Texas and he later became a state senator. Park visitors can see remains of the McKinney homestead which include the two-story limestone house, a horse trainer’s cabin, a gristmill, and an assortment of stone walls. After McKinney’s death, his wife, Anna, sold the property to James Woods Smith. Several generations of the Smith family farmed the land eventually donating it to the state of Texas in 1973.

The busiest months in the park are from March to November. Early April may be the best time to visit as the park’s namesake waterfall splashes amongst bluebonnets and cacti—a distinctive native Texan landscape. Graceful great egrets outline the creek beds. But the best reason to visit in spring may be the great blue heron rookery. During the first week in April, newborn chicks pop their fluffy heads from the nest awaiting the arrival of nourishment.

Stay at one of 81 campsites (all with water and electric hookups). McKinney Falls has 81 campsites with 30-amp or 50-amp electrical hookups, water, picnic tables, and fire rings. Restrooms with showers are nearby. Most weekends, park rangers offer a workshop or presentation at the rock-hewn amphitheater. Or rent one of the six newly remodeled cabins. The park also has a primitive youth camping area for use by nonprofit-sponsored youth groups. A group hall is available for rental.

And, with the park’s location within Texas’ capital city, McKinney Falls makes a great base camp from which to explore the nearby Hill Country.

Directions: 13 miles southeast of the state capitol in Austin off of U.S. Highway 183; take McKinney Falls Parkway from U.S. 183 South straight to the park entrance.