Often overshadowed by the National Park Service, the national forests in the U.S. offer some of the most awe-inspiring natural wonders in the country 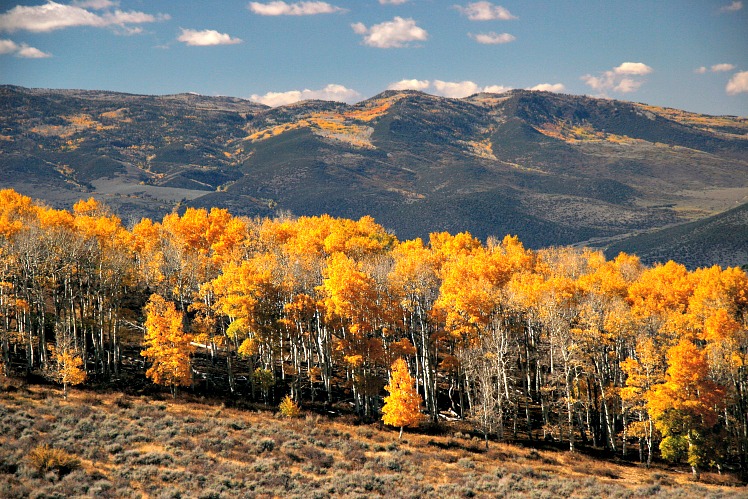 The renowned naturalist John Muir wrote that “thousands of tired, nerve-shaken, over-civilized people are beginning to find out that going to the mountains is going home; that wildness is a necessity, and that mountain parks and reservations are useful not only as fountains of timber and irrigating rivers but as fountains of life.”

The world has changed immensely since Muir wrote this in 1901. People, now more than ever, seek the benefits of nature.

For those who prefer a somewhat remote setting to camp, the U.S. Forest Service offers a range of choices from developed campgrounds to dispersed camping in the middle of nowhere. America’s National Forest system stretches over 193 million acres of vast, scenic beauty waiting to be discovered. Visitors who choose to recreate on these public lands find more than 150,000 miles of trails, 10,000 developed recreation sites, 57,000 miles of streams, 338,000 heritage sites, and specially designated sites that include 9,100 miles of byways, 22 recreation areas, 11 scenic areas, 439 wilderness areas, 122 wild and scenic rivers, nine monuments, and one preserve.

For starters, here’s a shortlist of some of the country’s most stunning national forests.

Tonto is the largest and most varied of the six national forests in Arizona with terrain ranging from the cactus-covered Sonoran Desert around Phoenix to pine-clad mountains along the Mogollon Rim. Highways 87, 188, and 260 are the main routes across the region though most are rough and accessed only by 4WD tracks. The forest also includes rocky canyons, grassy plains, rivers, and man-made lakes including Bartlett and Theodore Roosevelt.

At over 2.9 million acres, Tonto features some of the most rugged and inherently beautiful lands in the country. The variety in vegetation and range in elevation—from 1,300 to 7,900 feet—offers outstanding recreational opportunities throughout the year, whether it’s lake beaches or cool pine forests.

The Tonto is one of the most-visited “urban” forests in the United States with 3 million visitors annually. The forest’s boundaries are Phoenix to the south, the Mogollon Rim to the north, and the San Carlos and Fort Apache Indian reservations to the east.

Eight Wilderness Areas encompassing more than 589,300 acres protect the unique natural character of the land. In addition, portions of the Verde River have been designated as Arizona’s first and only Wild and Scenic River Area.

One of just two national forests in New England, the White Mountain National Forest is a year-round adventure destination. Crowned by the highest peaks in the region—the Presidential Range—the national forest includes the largest alpine zone in the Eastern U.S. For hikers, more than 1,200 miles of hiking trails wind through hardwood and conifer forests offering access to secluded waterfalls, glassy ponds, and ragged, granite peaks.

The White Mountain National Forest also harbors more than 160 miles of the Appalachian Trail including the footpath’s longest stretch above the tree line. In the fall, the national forest’s scenic roads including the 34.5-mile Kancamagus Scenic Byway provides some of the best leaf-peeping in New England.

Among the most biodiversity-rich national forests in the country, southeastern Arizona’s 1.78-million-acre Coronado National Forest spreads from saguaro-studded swathes of the desert to pine-oak woodlands to the high peaks of a dozen different sky mountain ranges harboring numerous species including black bears, screech owls, and javelina. The national forest’s craggy canyons are especially rich in birdlife—like Ramsey Canyon, a haven for species like blue-throated hummingbirds, acorn woodpeckers, and Montezuma quail.

For a unique overnight experience, the bunkhouses from a former mining camp in the national forest’s Santa Rita range have been transformed into cozy cabins (Kent Springs) in Madera Canyon; camping is available at Bog Springs Campground.

Stretching from the range’s sparsely forested lowlands to the glaciated granite spires of the high Sierras, the 1.3-million-acre protected area tops out at 13,900 feet and features a thousand-mile trail system that includes seven different National Recreation Trails. For backpackers, a 30-mile stretch of the Pacific Crest Trail traverses the national forest—but there are plenty of shorter hikes, too, like the Shadow of the Giants National Recreation Trail which winds through a grove of giant sequoias.

The Nantahala National Forest lies in the mountains and valleys of southwestern North Carolina. The largest of North Carolina’s four national forests, the Nantahala encompasses 531,148 acres with elevations ranging from 5,800 feet at Lone Bald to 1,200 feet along the Hiwassee River. The Forest is divided into three Districts, Cheoah in Robbinsville, Tusquitee in Murphy, and the Nantahala in Franklin. All district names come from the Cherokee language. “Nantahala” is a Cherokee word meaning “land of the noonday sun,” a fitting name for the Nantahala Gorge where the sun only reaches the valley floor at midday.

In the Nantahala National Forest, visitors enjoy a wide variety of recreational activities from whitewater rafting to camping. With over 600 miles of trails, opportunities exist for hikers, mountain bikers, horse-back riders, and off-highway vehicle riders. View some of the best mountain scenery from the 43-mile Cherohala Skyway through the and Nantahala and Cherokee National Forests. This National Scenic Byway connects Robbinsville to Tellico Plains in southeast Tennessee.

The Black Hills National Forest in western South Dakota consists of 1.2 million acres of forested hills and mountains, approximately 110 miles long and 70 miles wide. The Black Hills rise from the adjacent grasslands into a ponderosa pine forest. Described as an “Island in the Plains,” the Forest has diverse wildlife and plants reaching from the eastern forests to the western plains. This is a multiple-use Forest with activities ranging from timber production, grazing, to hiking, camping, mountain biking, horseback riding, rock climbing, mining, and wildlife viewing.

Amid the splendid scenery of the Black Hills National Forest are 11 reservoirs, 30 campgrounds, 32 picnic areas, two scenic byways, 1,300 miles of streams, over 13,426 acres of wilderness, and 353 miles of trails. Every location in the Black Hills is a special place but there are hidden gems around every corner.

The Chattahoochee-Oconee National Forests provide some of the finest outdoor recreation opportunities and natural resources in Georgia. Featuring nearly 867,000 acres across 26 counties, thousands of miles of clear-running streams and rivers, approximately 850 miles of recreation trails, and dozens of campgrounds, picnic areas, and other recreation activity opportunities, these lands are rich in natural scenery, history, and culture.

Cool in the summer, mild in the winter, the Russell-Brasstown Scenic Byway encircles the headwaters of the Chattahoochee River and is surrounded by the Chattahoochee National Forest. The drive is ideal for viewing colorful wildflowers or dazzling fall colors. Secluded valley views of Wilderness Areas abound along the way. The 40-mile loop follows State Highways 348, 180, and 17/75. Take in 360-degree views atop the 4,784 feet Brasstown Bald, Georgia’s tallest mountain. At an elevation of 2,080 feet, on the banks of the Tallulah River, the Tallulah River Campground is a favorite. If you like hiking, the Coleman River Trail is there for you to enjoy the outdoors and nature.

Dixie National Forest stretches for about 170 miles across southern Utah. It includes almost two million acres and is the largest national forest in Utah. The forest is adjacent to three national parks and two national monuments. The red sandstone formations in Red Canyon rival those of Bryce Canyon National Park. Hell’s Backbone Bridge and the view into Death Hollow are breathtaking. Boulder Mountain and its many small lakes provide opportunities for hiking, fishing, and viewing outstanding scenery.

Elevations in the forest vary from 2,800 feet near St. George to 11,322 feet at Blue Bell Knoll on Boulder Mountain. High altitude forests in gently rolling hills characterize the Markagunt, Pansaugunt, and Aquarius plateaus. The vegetation changes from sparse, desert-type plants at the lower elevations to stands of low-growing pinyon pine and juniper dominating the mid-elevations. At the higher elevations, aspen and conifers such as pine, spruce, and fir predominate.

Lassen National Forest is a United States national forest of 1,700 square miles in northeastern California. It is named after pioneer Peter Lassen who mined and ranched the area in the 1850s. Lassen National Forest is located about 80 miles east of Red Bluff. It is bounded by the Sierra Nevada mountain range to the south, the Modoc Plateau to the east, and California’s Central Valley to the west. The Forest surrounds Lassen Volcanic National Park. The Forest has two major river systems as well as many lakes, cinder cones, and lava flows.

In a scenic mountain setting, Lake Almanor is one of the largest man-made lakes in California at 75 square miles. It offers fishing, boating, water skiing, swimming, camping, and picnicking. The Almanor Recreation Trail winds along the west side of Almanor providing views of the lake, the mountains, wildflowers, and wildlife. Family and group campgrounds, boat launch facilities, and private marinas are available.

Rising as a green oasis above the junction of I-15 and I-70 in central Utah, the mountains and plateaus that form Fishlake National Forest offer spectacular and widely varied scenery and cool climatic relief from the hot desert valleys. The namesake for the forest is Fish Lake, the largest freshwater mountain lake in the state.

Fishlake National Forest is a recreationalist’s paradise known for its beautiful aspen forests, scenic byways, motorized and non-motorized trails, elk hunting, and mackinaw and trout fishing. Recreational opportunities include scenic drives, mountain biking, snowmobiling, ATV use, hiking, and camping. The Paiute ATV Trail winds through 250 miles of the forest’s most scenic terrain. For those who prefer the comfort of a car, the Beaver Canyon Scenic Byway travels along the beautiful Bear River lined by aspen, spruce, and fir trees. It ends at a lovely mountain lake.

I like trees because they seem more resigned to the way they have to live than other things do.