Just north of the U.S. border is a wine lover’s playground, the Okanagan Valley 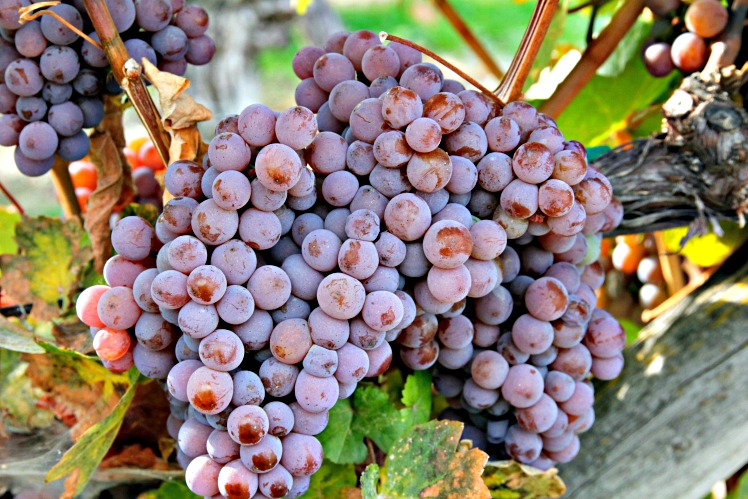 If the movie “Sideways”—in which best friends Miles and Jack road-trip through Santa Barbara (California) wine country—ever gets a sequel, screenwriters should consider setting it in a little-known area some 1,200 miles north. Canada’s stunning Okanagan Valley is emerging as a varied and exciting wine destination.

Only 150 scenic miles stretch from the northern edge of British Columbia’s Okanagan Valley to its southern limit at the U.S. border but that short distance encompasses a world of wine. The north with its cool, forested hills and racy Rieslings evokes Alsace or the Mosel; the south comprises Canada’s only desert where intense summer heat produces powerful Bordeaux-style reds and lush Rhône-style whites. The fact that from north to south there are so many pockets with so much potential for certain grape varieties makes the valley unique as there are very few wine regions like it in the world.

This sun-soaked valley follows a series of pristine lakes and steep bluffs carved out by retreating glaciers. The Okanagan has the most diverse and complex soil system of any wine region in the world. It’s the only region that was formed by volcanic activity and then overrun by not one but two glacial ages.

Part of British Columbia’s sun-kissed Okanagan Valley, the scenic Oliver-Osoyoos region is home to Canada’s most outstanding vineyards and wines. Oliver and Osoyoos are neighboring towns in British Columbia’s south Okanagan Valley. Just north of the U.S. border, they’re in the hottest and driest region of Canada. The desert landscape is ideal for vineyards and it’s the only one of its kind across the country. That’s why this region spanning 22 miles is host to more than 40 wineries producing some of Canada’s best bottles. Despite a relatively youthful vintner culture that began in the 1960s with table grapes today’s scene is prolific and world-class.

Before it became known as Canada’s wine capital, Oliver was the “home of the cantaloupe”. In 1919, John Oliver, then premier of British Columbia, had an irrigation canal built. The availability of water turned the arid town into a landscape lush with rotund cantaloupes, grain crops, and fruit trees. Grape cultivation followed soon after.

With rare exception, the 1 million cases of wine produced here annually—from pinot gris and chardonnay to cabernet sauvignon and merlot—don’t ever make it to US shelves or restaurants. In fact, they barely make it outside British Columbia due to limited production and locals’ voracious consumption of the stuff.

Among the most picturesque and family-friendly is Tinhorn Creek which hosts all-ages concerts between May and August. Tinhorn Creek is much more than a winery; it’s an experience. The winery offers not only outstanding wines but also lots to do. Tinhorn Creek is the starting point of the Golden Mile Trail which takes you past a 100-year-old historic stamp mill (a haven for hikers) as well as Miradoro Restaurant, an elegant spot with unforgettable views and a natural amphitheater overlooking the landscape that hosts a summer concert series.

What also sets the region apart from Napa or Sonoma is North America’s first Aboriginal-owned and -operated winery, Nk’Mip Cellars. Nk’Mip (pronounced “in-ka-meep”) contributes to the local success of the Osoyoos Indian Band while honoring and sharing their heritage. Whether you’re there to dine at Nk’Mip’s farm-to-table restaurant (enjoy dishes made using traditional Indigenous techniques), to stay at the stunning Spirit Ridge Resort or NK’mip RV park and campground, or simply to taste the award-winning wines, you’ll go home with a greater reverence for the history and customs of the Osoyoos Indian Band—and some stellar wine.

There are also a handful of Indian-run wineries. That’s because, during the 1980s and ’90s, many East Indian immigrants settled in Oliver Osoyoos as farmers; Punjab-born siblings Sukhi and Balwinder Dhaliwal were among them. After cultivating grapes for other wineries they founded a family label, Kismet Estate Winery. Producing 6,000 cases annually, their cellar includes a delicious, award-winning wine called Safed. The name means “white” in Punjabi and it’s a citrusy white wine blend with orange muscat and semillon. The Dhaliwals have added a four-room guesthouse and the delicious Masala Bistro restaurant.

Tastings throughout Oliver Osoyoos are a bargain. Stoneboat charges $5 for four samples. Husband and wife Lanny and Julie Martiniuk, a former scientist and pharmacist respectively, started growing grapes in 1979 and produce about 8,000 cases annually including the world’s only pinotage icewine ($36.90). A South African visitor gifted the Martiniuks some pinotage vine clippings and while uncommon in North America, Lanny found they propagated well thanks to western Canada’s dry desert-like climate.

The 9-year-old Platinum Bench draws a big following for its tasty artisanal bread including Double Cream Brie and Pear Preserves Epi (a type of baguette) and Chocolate Strawberry Balsamic Epi. Co-owner Fiona Duncan (husband Murray Jones is the co-owner and vintner) learned breadmaking in San Francisco as a form of stress management and they easily sell 250 to 350 loaves during peak days. Daily tastings at Platinum Bench see its wines expertly paired with Duncan’s fresh loaves. The gorgonzola and fig are accompanied by the Meritage, its complex bouquet of ripe plums, blackcurrants, blackberries, and cherries accentuating the loaf’s light, blue cheese flavor. The sharpness and saltiness of her asiago cheese bread pairs nicely with the Gamay Noir’s notes of raspberry and light pepper.

Tasty poolside pizzas and stunning hilly views can accompany tastings—six two-ounce pours for $15—at Black Hills Estate Winery. This flight features four of their current releases, two whites and two reds from their highly acclaimed Black Hills Estate Winery Portfolio. A red wine flight (four red wines) is also available for $20. Black Hills grow four clones of Cabernet Sauvignon, two clones of Cabernet Franc, and four clones of Merlot. Each clone reflects its terroir with a unique flavor profile. They respect each clone’s individuality by crushing, fermenting, and barrel aging them separately. When they are eventually blended together, this Clonal diversity gives multi-faceted depth and complexity to their famed Nota Bene.

In a valley resplendent with beautiful wineries, lush vineyards, and sumptuous award-winning wines, Hester Creek Estate Winery in the South Okanagan’s Golden Mile stands out as one of the finest. Hester Creek is situated within some of British Columbia’s oldest vineyards in the bountiful Golden Mile region. Definitely try the Okanagan’s only Trebbiano; its grapes plucked from the estate’s 50-year-old vines. It is velvety smooth and ripe with apple and pear flavors. A classic blend of almost equal parts Cabernet Franc, Cabernet Sauvignon, and Merlot, the Judge is a powerful, yet elegant Bordeaux style red that is built to age gracefully.

So take our word when we say Canada is the next hot spot. Or don’t (…more wine for us).