Grand doesn’t really even begin to describe it 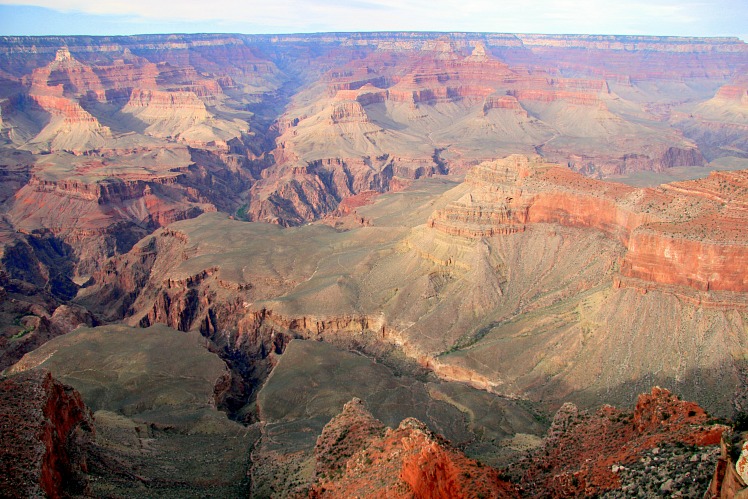 No matter how many photos you’ve seen of the Grand Canyon, standing at the rim’s edge for the first time takes your breath away—especially if you’re there at sunset as the fading light paints shades of rose, violet, and gold onto the ancient rocks. There will never be a photograph captured of the Grand Canyon that can adequately describe its depth, breadth, and true beauty.

The canyon walls have stories that we will never hear and a history that our eyes will never behold. But if you stand and watch long enough, you’ll start to appreciate the vastness as its depths open up as each emerging shadow moves across its void. It is perhaps for those reasons that it has earned a rare spot among the 7 Natural Wonders of the World and why everyone should visit at least once in their lifetime.

The Grand Canyon is about 1-mile deep and 10 miles wide, measuring 277 miles in length, and it holds more than 10,000 years of history in that space (millions if you really want to get technical). There are endless ways to experience it depending on what the body and mind are looking for and one’s level of endurance. The Grand Canyon is not “one place” but a desert wilderness with many areas to explore—North Rim, South Rim, and West Rim (outside of Grand Canyon National Park); the Village of Supai and Kaibab National Forest—there are different stories to seek out and to create in each of them.

In a well–known film lampoon of the family vacation, Chevy Chase stands at the edge of the Grand Canyon, nods his head in approval, and leaves. Visitors in real life tend to linger a bit longer—but not much. They emerge from cars or tour buses on the South Rim to peer out and take a selfie. Sometimes, they stay for a picnic or to have lunch at one of the rim lodges. Then they’re gone, the once-in-a-lifetime visit checked off their bucket list. According to Grand Canyon National Park officials, the average visit to this Arizona attraction lasts just two hours.

The Grand Canyon can be a disappointment. Viewed from the top near one of the visitors’ parking lots, the fissured network of buttes and desert plateaus that make up one of the world’s largest river gorges can appear almost like a two-dimensional painting. More than one spectator has called it overrated.

But for those who take the first steps to descend below the canyon rim, something magical happens. Despite all the beautiful parks and places to discover on Earth, they’ll decide this is the place they must return to, again and again.

When hikers step through the canvas of pastel pink, orange, grey, and deep blue, they become part of the landscape. Down foot trails gouged from the side of rock cliffs, the view expands to 360 degrees and the canyon takes on dimensions and distances that can’t quite be imagined. Only the condors and ravens seem to have mastered the terrain. A vast world like this leaves plenty of room for the mind to wander, to gaze, and to rest.

First, let’s take a quick look at the two most visited locations: the North and South Rims.

The North Rim is visited less frequently than the South Rim for a variety of reasons—it is more remote and difficult to get to than the busy South Rim, it is further removed from major population centers, it maintains a short season (May 15–October 15) because of its heavy snow and higher elevation (about 8,000 feet; 9,200 feet at the highest point), and it offers fewer easy access points to peer into the valley of views than its southern counterpart does.

If you plan to visit the Grand Canyon just once in your life, you’ll want it to be the South Rim, first to get a load of the views that drew awareness to the area in the first place. They really are spectacular. If you’ve already seen the South Rim, a visit to the northern side is where you can find solitude in backcountry camping and hiking and unique sites to photograph such as the Cape Royal viewpoint.

The South Rim is the best-known area of the park and is the passageway to iconic viewpoints such as Yavapai and Mather Points, both of which often serve up to many the first views of the colorful gorge as it is located just a short walk from the Grand Canyon Visitor Center. At night, catch the sunset at Hopi Point and Mojave Point, two of the most popular places in the park to drink in the pink sky. Near to all of them are iconic lodges, located just steps from the canyon rim. The panoramic views in this area seem to stretch on endlessly and visitor amenities abound including shops, restaurants, free shuttle access to iconic viewpoints, trail access, historical sites, exhibits—and the list goes on and on.

You will find everything you need for a Grand Canyon adventure in Grand Canyon Village. This historic village has excellent shopping for all the hiking and camping gear you need, as well as authentic American Indian crafts and plenty of canyon souvenirs. The village also has stellar lodging options and a top-rated walking tour. Highlights of the tour include Bright Angel Lodge, El Tovar Hotel, Buckey O’Neill Cabin, Hopi House, Lookout Studio, and Kolb Studio.

Begin your Grand Canyon tour at the visitor center—especially if you have limited time. Here you can pick up a copy of the self-guided walking tour brochure for in-depth information on the canyon and its history. Park rangers can help design an itinerary to make the most of your visit, suggest hikes to suit your fitness level, and recommend the best viewpoints for sunset and/or sunrise.

There are many activities in the Village including helicopter tours, horseback rides, scenic train rides, and mule trips. Do you remember the Brady Bunch adventure when Mike, Cindy, and the clan ventured down to the bottom of the Grand Canyon by mule? This is an actual thing! But, why a mule? They’re more sure-footed than horses. From the South Rim, you can ride a mule to the Colorado River and spend a night or two at Phantom Ranch or take a shorter two-hour ride along the rim. Book as far in advance as possible to guarantee yourself a spot.

And, of course, the hiking can’t be beaten. Some of the best hikes include Bright Angel Trail, South Kaibab Trail, Hermit Trail, and Rim Trail. The simplest walk is the Rim Trail which stretches for 13—mostly flat—miles along the top of the South Rim. Much of it is paved and wheelchair-accessible and you can enter and leave the path at any viewpoint. Backcountry permits are not required for day hikes, but—with the exception of Phantom Ranch—they are if you plan to spend the night.

If your fitness allows, try to hike at least part of the way into the Grand Canyon; you’ll get a completely different perspective than you do from the top. The most popular South Rim trail into the canyon is the Bright Angel Trail which is well maintained and offers some shade along the way. Another good option is the South Kaibab Trail—it is a little steeper and has less shade but boasts slightly more dramatic views if you’re only doing part of the trail. While both of these trails go all the way to the bottom you can easily transform each of them into a day hike by turning around at one of the mile markers and going back the way you came.

For visitors who aren’t up for a hike into the canyon, a shuttle transports visitors along the rim of the canyon, stopping at many breathtaking vantage points. You can also enjoy the views directly from Grand Canyon Village and enjoy lunch at one of the village’s restaurants: Bright Angel Lodge, El Tovar, or Maswik Lodge.

Part of the Grand Canyon but outside of the National Park is Hualapai Tribe’s Grand Canyon West. Walk the glass panels on the Skywalk. Soar over the canyon in a helicopter or on a zipline. Float down the Colorado River on a river tour. Take in the epic views at Guano Point and Eagle Point. And, you can stay on-site at the Cabins at Grand Canyon West.

Weather: Though open 365 days a year, Grand Canyon weather can present a few extremes. While the South Rim is warm in the summer, it’s also very busy and the temperature on the canyon floor can reach over 100 degrees. Spring and fall can be pleasant, but unpredictable.

How the park got its name: According to research by award-winning documentarian Ken Burns, the park got its name from a one-armed Civil War veteran and geology professor named John Wesley Powell who declared it the “Grandest of Canyons” after rafting the length of the Colorado River in 1869, after which the name stuck.

Iconic site in the park: Mather Point, just steps from the Grand Canyon Visitor Center is often the first view that visitors have of the park. Just after gathering the info needed in order to better plan their stay, visitors can step out onto a narrow railed overlook to take in some of the most extensive views that the canyon has to offer, including Yavapai Point and the Bright Angel Trail stretching down to the bottom of the canyon. From here you can also catch a glimpse of the mighty Colorado River.

Let this great wonder of nature remain as it now is. You cannot improve on it. But what you can do is keep it for your children, your children’s children, and all who come after you, as the one great sight which every American should see.

—Theodore Roosevelt on the Grand Canyon in 1908