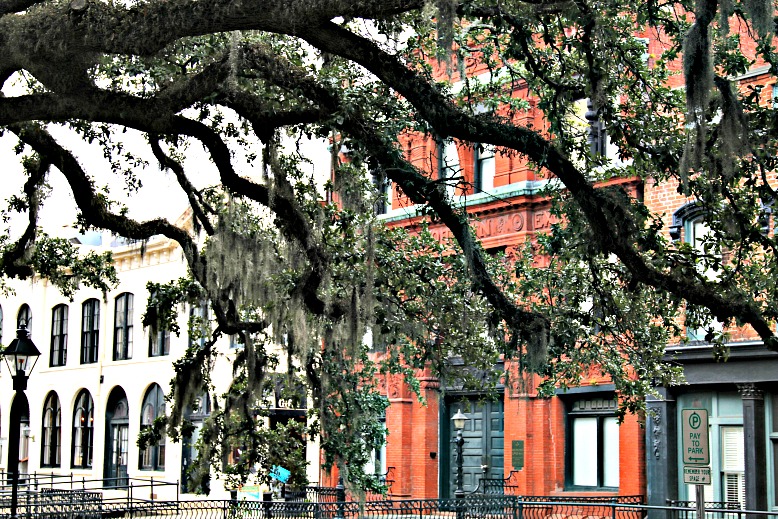 Savannah is the South’s sweetheart—from her cobblestone streets underfoot to her thin veils of Spanish moss-draped on the live oaks from above. She’s been sweeping folks off their feet since 1733 when General James Oglethorpe and his 120 passengers aboard the Anne first anchored along the Savannah River.

As America’s first planned city, Savannah was designed to be pedestrian-friendly, laid out in grids with wide streets blended with public squares and parks; 22 of the 24 original squares still exist today.

During the Civil War, Savannah was one of the few towns left standing in wake of Sherman’s “March to the Sea,” and was given as a Christmas present to Abraham Lincoln in 1864.

Historic preservation saved many of the iconic buildings that the city is known for today. Savannah also has thrived from connections with literature and film, namely Forrest Gump and Midnight in the Garden of Good and Evil.

Today, Savannah is a charming city that combines history, art, architecture, dining, and boutiques. There’s truly something here for everyone.

Life has always played out on the streets and in the squares in Savannah. Temperate year-round and walkable with cobblestones and oak-lined squares is a rarity in the US. Gas-lit paths line Savannah’s river of the same name which empties after 15 miles into wide, sandy beaches around Tybee Island. Gracious neoclassical mansions along the herringbone pavements provide an open-air gallery that’s free to admire.

Walkthrough the 22 park-like historic squares in downtown Savannah, each with unique elements and stories. Don’t miss Chippewa Square, best known as the site of the bench scene from the movie Forrest Gump.

With breakfast in hand take a leisurely walk up Bull Street to Forsyth Park for a selfie at the most iconic (and most photographed) fountain in Savannah. The largest park in the historic district of Savannah, Forsyth Park covers 30 acres of land just south of Gaston Street and north of Park Avenue. For locals and tourists, Forsyth Park is a hub of social interaction. Concerts, recreation sports, people watching, sunbathing, reading, and relaxing can all be seen in Forsyth Park depending on when you visit. Be sure to plan an hour to check out Forsyth Park.

It may sound somewhat touristy, but the best way to see Savannah’s historic district, especially for first-timers, is aboard a trolley tour. Two favorites are Old Savannah Tours and Old Town Trolley Tours of Savannah. These tours are hop-on, hop-off, allowing you to see most of the historic area in a short amount of time.

If you’d like to explore while eating, and who wouldn’t consider a food tour. The Savannah Taste Experience offers a variety of tours including one through the historic downtown area (First Squares Food Tour) and another off-the-beaten-path tour through Savannah’s east side (Famous & Secret East Side Food Tour) including a stop at Cha Bella, a Farm to Table restaurant, and Leopold’s Ice Cream. Both tours provide tastings at multiple establishments with enough food to satisfy your lunch cravings.

No matter what you do for lunch, afterward, head to Leopold’s named one of the top 10 ice cream parlors in the world. Leopold’s Ice Cream was founded in 1919 by three brothers from Greece. They learned the art of candy and dessert from an uncle who had already settled in America. The brothers perfected their secret formulas and created the now world-famous Leopold’s VeriBest ice cream. Their ice cream is made one batch at a time using local ingredients like Savannah Bee Company honey. With a full soda fountain menu and more than 28 flavors available at any given time, they have a scoop of premium handmade ice cream just for you. Leopold’s is located at 212 E. Broughton Street.

The next stop is the uneven cobblestone streets of the Savannah Riverfront for a little shopping and sightseeing. A must-see is the new Plant Riverside District with jaw-dropping shops, restaurants, and hotels. The site’s original 1912 power plant has been restored with the preservation of historic characteristics such as the iconic twin smokestacks and brick exterior and redeveloped with hotel rooms and mixed-use space. Flanking on either side are two new buildings also featuring hotel rooms, restaurants, lounges, and meeting space. Along its shoreline, over a quarter-mile of riverwalk has been created.

The aroma of fresh pralines greets you at the door of the original River Street Sweets along with a free sample rolled out on a giant marble slab. Located on East River Street, the nostalgically decorated candy shop’s gourmet Southern treats—like hand-stretched peanut brittle, glazed pecans, and saltwater taffy—are made in-store and shipped all over the world. Alternately visit the Savannah Candy Kitchen with a location at City Market and River Street.

Savannah was and still is a port town; a Savannah Riverboat Cruise is a great way to learn about the history and enjoy the water during a leisurely ride. The riverboat tours leave the dock next to the exact location where General Oglethrope first landed on the riverfront and head upriver to the Port of Savanna and then turn back under the Eugene Talmadge Memorial Bridge and past the historic riverfront. The tours continue downriver passing the world-famous Waving Girl through the shipyards and just past the tip of Hutchinson Island and Old Fort Jackson (If you take the 3:30 p.m. tour you can also see them shoot the cannon at Old Fort Jackson). The boat then circles back upriver to arrive gently back at the dock.

Prominent in Midnight in the Garden of Good and Evil, Bonaventure (which means “good fortune”) is the final resting place for several of Savannah’s most famous residents including Pulitzer Prize-winning poet Conrad Aiken and lyricist Johnny Mercer. This large cemetery on the banks of the placid Wilmington River is home to massive moss-draped oaks that stand guard over rows of elegant statuary and headstones. Spanish moss-draped trees make it a favorite spot of photographers. Free self-guided tours and free guided tours by Bonaventure Historical Society volunteers, every second Sunday, at 2 pm, 2:30 pm, and 3 pm.

Tybee Island, often referred to as Savannah’s Beach offers visitors a place for all seasons with sandy beaches, great fishing, and rich history at every turn. River’s End Campground is a fantastic home base for exploring it all. River’s End offers full hook-up sites including water, 30 or 50 amp electrical service, standard cable, and sewer. The length and width of the sites vary. Not all sites can accommodate large rigs. The campground is approximately one-half mile from the beach and 15 miles from historic downtown Savannah.

About 20 minutes west of Historic Savannah, Creek Fire is a new RV resort conveniently located ½ mile west of Interstate 95 at Exit 94. The park offers 105 RV sites, all suitable for big rigs. Site options include back-in and pull-through, gravel, and concrete. Interior roads are asphalt. Each site offers 50/30/20-amp electric service, water, and sewer centrally located. The park is adding 100+ new sites, two new pool features, a rally building, a pool bar, and restaurant, a market, and a gym. Resort amenities include canoe, kayak, and boat rentals; a 1-mile nature trail around the lake, a tennis/pickleball court, a bocce ball, and a full shower and laundry facilities. CreekFire RV Resort opened in October 2017 with 105 sites, two park models, and seven cabins. Two years after opening, CreekFire was already expanding with another 100 RV sites planned.