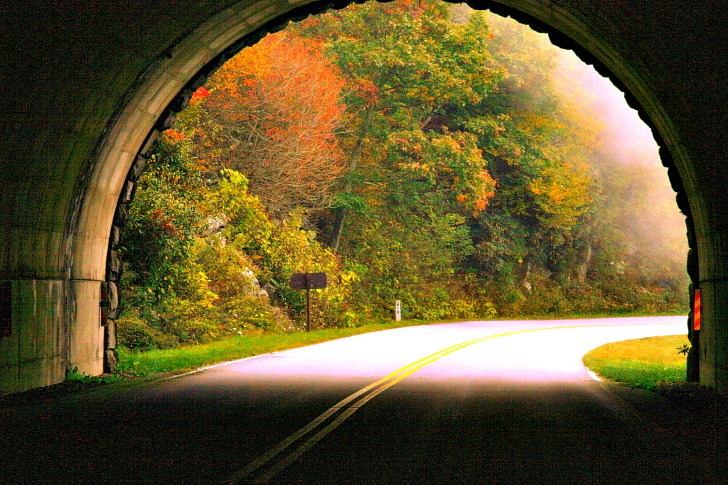 When will the Parkway leaves stop producing chlorophyll and change to their wardrobe of fall colors? If you’re wondering when the peak Blue Ridge Parkway Fall leaf season will be this year, you’re not alone. It’s usually in October which is often the busiest month along the Parkway. But there are many factors that influence the timing and intensity of the color including when and how much rain falls, how late in the season the sun shines with intense heat, and how cool the nights are. So your best bet to see peak autumn color is to incorporate as many of these elements into your trip as possible.

Elevation: Travel a longer section of the Parkway to see a variety of elevations. Leaves change color at higher, cooler elevations first. The elevation along the Parkway ranges from over 6,000 feet at Richland Balsam in North Carolina to just under 650 feet at the James River in Virginia. You can also continue into Shenandoah and Great Smoky Mountains National Parks on either end of the Parkway for additional opportunities to view fall color. Clingmans Dome in Great Smoky Mountains National Park is the state high point of Tennessee and Mount Mitchell, located along the Parkway at Milepost 355 is the state high point for North Carolina and either would be a good choice.

Aspect: Which direction a slope face determines its temperature and the type of plants that grow there. Leaves change color first on cooler, wetter north-facing slopes and later on warmer, south-facing slopes. View a variety of aspects to see different plants and different phases of color change.

Distance: Since overlooks with distant views reveal a variety of elevations and aspects you are more likely to see leaf color. Clingmans Dome in Great Smoky Mountains National Park is the state high point of Tennessee, and Mount Mitchell, with access at Parkway at Milepost 355, is the state high point for North Carolina; either would provide a long-distance view. But many Parkway overlooks also provide long-range views, so there are lots of options besides the tallest peak in the state.

The bottom line is, don’t expect to pick one spot on one day on the Parkway and see the perfect combination of colors—instead, travel a longer distance and you’re likely to meet all the criteria above and see a variety of stages of color change.

Here, then, is the general progression:

2021 Fall Color Forecast for the Blue Ridge Parkway, by week

September 27-October 7: At the highest elevations, close to 6,000 feet there is some color but it’s often very spotty and muted. The views from these locations will be mostly green since the areas viewed are lower elevations. Areas that turn early in this date and elevation range include Graveyard Fields (Milepost 418.8) and Rough Ridge Trail (Milepost 302.8).

October 1-10: Peak time for areas above 5,000 feet. This would include Clingmans Dome, Grandfather Mountain, Mount Mitchell, Waterrock Knob (Milepost 451.2), and Graveyard fields (the first location on the Parkway to turn) and higher elevations of The Blue Ridge Parkway (between Asheville and Cherokee) and Great Smoky Mountains National Park.

October 10 – 20: Peak time for elevations from 4,000-5,000 feet. This would include almost all Blue Ridge Parkway locations and the majority of the Great Smoky Mountains National Park as well. Included in this elevation are the Boone and Blowing Rock areas.

October 18-26: Peak time for lower elevations, from 3,000-4,000 feet. This would include places like Pisgah National Forest which includes Sliding Rock and Looking Glass Falls, Dill Falls, Wildcat Falls, and many other waterfalls.  Other areas include Linville Gorge (Milepost 316.4), Nantahala Gorge, Maggie Valley (Milepost 455.5), and Cataloochee Valley.

October 24-31: Peak time for elevations from 2,000 feet-3,000 feet. This would include The cities of Asheville, Brevard, Waynesville, Cherokee, and many others. Places of interest include Dupont State Forest and Biltmore Estate, and Cades Cove.

Please note: These timeframes are estimates based on prior years and current weather and soil conditions. Actual peak times may vary some from this forecast.

Camping: Be sure to make advance camping reservations. The Parkway’s eight campgrounds were built years ago and do not currently offer RV hookups. Most Parkway campgrounds have at least some sites that will accommodate sizeable recreational vehicles. There are many private campgrounds in communities available just off the Parkway with full RV hookups and amenities.

Tunnels: Know the height of your RV in comparison to the heights of the 26 tunnels along the Parkway. The top of each tunnel is curved with the maximum height above the center line and the minimum height at the road shoulder.

Parkway Detour: From May 2021 to spring 2022, a section of the Blue Ridge Parkway will be closed in Virginia’s Blue Ridge. Expect a closure by Roanoke due to a serious slope failure there. The National Park Service will be completing repairs on the Roanoke River Bridge at Milepost 114 and also repairing a road hazard at Milepost 127.9 that was caused by heavy rains and landslides. As a result, the Blue Ridge Parkway will be closed from Milepost 112.2 (Route 24 near Vinton) to Milepost 136 (Route 221 on Bent Mountain) for through-travelers. You can take US 221 around the closure from Parkway Milepost 135.9 to Milepost 106 (about a 27-mile detour).

The Blue Ridge Parkway is a popular destination for vacationers who RV. Nothing beats a beautiful, wooded drive in your home-away-from-home!

Almost heaven, West Virginia
Blue Ridge Mountains, Shenandoah River
Life is old there, older than the trees
Younger than the mountains, blowing like a breeze