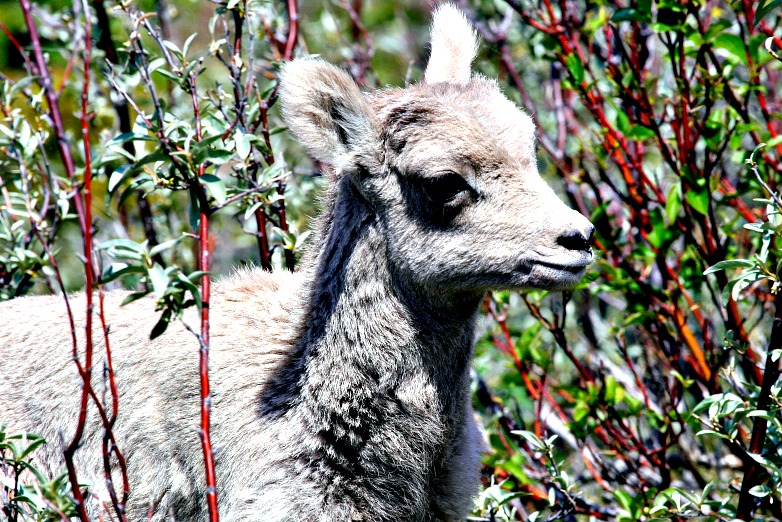 The Mountain goat is a hoofed mammal native to North America. A subalpine to alpine species, it is a sure-footed climber commonly seen on cliffs and ice. Both male and female Mountain goats have beards, short tails, and long black horns that contain yearly growth rings. They are protected from the elements by their woolly white double coats. The fine, dense wool of their undercoats is covered by an outer layer of longer, hollow hairs. Their coats help Mountain goats to withstand winter temperatures as low as -51 degrees F and winds of up to 99 mph.

Mountain goats live in the Rocky Mountains and the Cascade Range and other mountain regions of Western North America from Washington, Idaho, and Montana through British Columbia and Alberta into the southern Yukon and southeastern Alaska.

A geographically and genetically distinct subspecies of pronghorn, the Sonoran pronghorn is smaller and lighter in color and is adapted for survival in desert conditions. The males weigh up to 130 pounds and females up to 110 pounds. Pronghorn are slightly smaller than a white-tailed deer with a shoulder height of about three feet. Pronghorn can reach speeds of up to 60 miles per hour on short distances and can maintain a speed of 35 mph for long distances.

While both sexes have horns, the females’ are short and look more like a bump. The males’ are black and about 10-12 inches long. Their horns extend up and point backward with a small tine (prong) that points forward. The unique design of their horn is what earned the species their name—pronghorn.

Pronghorn were once as widely distributed as buffalo. The Sonoran pronghorn ranged widely within the Sonoran desert in Arizona and California down into Sonora, Mexico—a broad, open desert landscape with limited vegetation. Today they are reduced to an estimated 160 free-ranging animals within the United States and an additional 240 free-ranging within Sonora Mexico.

INSIDER TIP: The core of what is left of the rare mammal is centered on Cabeza Prieta and Kofa national wildlife refuges. But the animal with a habit to move around in small caravans ranges widely onto other federal public lands: the Barry M. Goldwater Range, Organ Pipe National Monument, and Yuma Proving Grounds.

The elk also known as the wapiti is one of the largest species within the deer family. Native American tribes had hundreds of names for elk including wapiti. It originates from the Shawnee and Cree word waapiti, meaning “white rump”. Elk range in forest and forest-edge habitat feeding on grasses, plants, leaves, and bark. Male elk have large antlers which they shed each year. Elk have thick, brown fur with a reddish hue. This animal’s rump patch, a circular area around its tail, is buff or cream in color. The average male stands nearly 5 feet tall at the shoulder and weighs over 700 pounds but they can grow much larger. The largest subspecies can surpass 1,300 pounds or more.

INSIDER TIP: The Wapiti is the second largest (after the moose) most highly evolved Old World deer. It is also known as the American elk.

INSIDER TIP: Rocky Mountain bighorn sheep are the largest wild sheep in North America. Muscular males can weigh over 300 pounds and stand over three feet tall at the shoulder. Females are roughly half this size.

5 of 5: Javelina or Collared Peccary

Javelina also known as collared peccary are medium-sized animals that look similar to a wild boar. Javelina stands about 2 feet tall and can weigh between 35 and 55 pounds. They are 3 to 4 feet long. They have mainly short coarse salt and pepper colored hair, short legs, and a pig-like nose. The hair around the neck/shoulder area is lighter in color giving it the look of a collar.

Javelinas have long, sharp canine teeth which protrude from the jaws about an inch. They live in desert washes, saguaro and palo verde forests, oak woodlands, and grasslands with mixed shrubs and cacti. Javelinas can be found in the deserts of southwest Texas, New Mexico, Arizona, and southward through Mexico.

INSIDER TIP: Javelinas are not pigs. They look similar but pigs are from the “Old World” and peccary is “New World” animals.