The Okanagan Valley is an amazingly diverse land that attracts visitors from around the world. With parks, lakes, orchards, and wineries around every corner, this area of BC is a very special place. 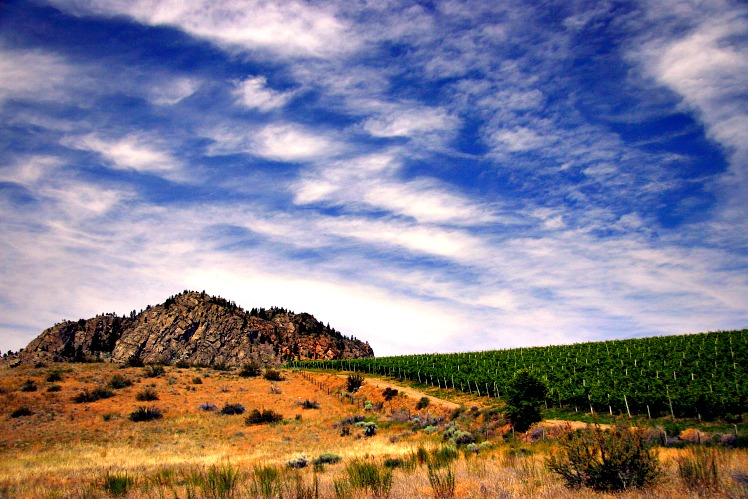 From the moment you first see the Okanagan Valley, it is obviously a special place. Whether you descend the steep switchbacks of the Crowsnest Highway into Osoyoos or drive from Penticton past the rugged Skaha Bluffs, the valley appears completely different from its surroundings, almost un-Canadian.

Its reputation often precedes it of course—Canada’s “pocket desert“, a place of great geological and biological diversity. Birders know this diversity and come from all over the continent to see the 200 species that breed in the Okanagan. There are few places of similar size in North America that could match that total.

Canadian naturalists are attracted by the long list of plants and animals found nowhere else in the country. The diversity is a product of both location—sandwiched between the coast and the prairies, between cold northern forests and Great Basin deserts—and elevation.

The Okanagan is British Columbia’s deepest interior valley, extending from the hot valley floor at 900 feet to alpine peaks at 7,300 feet elevation.

The valley was born millions of years ago in the collisions of continents that built the entire west coast of North America. Two hundred million years ago the west coast was somewhere between the Okanagan and Calgary; then a large piece of land known as Quesnellia slid into North America, creating much of the British Columbia interior. A second collision formed the coastal regions of the province.

Then, about 55 million years ago, the collisions subsided and the monumental pressure that had been pushing eastward throughout British Columbia eased. This relaxation created deep cracks throughout the province, among them the newborn Okanagan Valley. The ancient rocks that had once been the continental shelf of North America, long-buried by Quesnellia, rose to the surface. They now form the cliffs along the east side of the Okanagan, as well as the massive McIntyre Bluff that forms the west wall of the valley at the south end of Vaseux Lake.

Volcanic activity was common during the birth of the Okanagan, creating mountains throughout the central Okanagan including Knox Mountain in Kelowna, Giant’s Head in Summerland, and most of the hills around the White Lake Basin northwest of Oliver.

The final geological touch in the shaping of the valley came 2 million years ago when the valley was covered by a series of ice sheets. The Pleistocene glaciers rounded off the local mountains and brought massive amounts of sand and gravel to the valley bottom.

As the last glaciers melted about 10,000 years ago, the meltwaters created the silt benches between Penticton and Naramata that are now renowned for their fine vineyards, as well as the sandy benches of Oliver and Osoyoos that are so ideal for the noble grape varieties.

The Okanagan lies in the rain shadow of the Cascade Mountains. Pacific storms, pushed by westerly winds, are wrung dry as they ascend the cold coastal slopes of these high peaks. As the air descends into the Okanagan, it is relatively warm and dry, and often the only local sign of a storm that brought torrential rain to Vancouver and Seattle are grey skies and a brisk southerly wind on Osoyoos Lake.

As a result, the south Okanagan receives only 12 inches of precipitation each year—about the same as Tucson, Arizona. The cold Canadian winters are strongly moderated by the large lakes in the valley, and vintners needing to harvest icewine grapes at 16 degrees F (-8 °C) are often forced to wait for the coldest night in January.

This warm, dry climate produces Canada’s “pocket desert”, a small area of bunchgrass, prickly pear cacti, and rattlesnakes that clings to undeveloped sites in the valley bottom between Oliver and Osoyoos. The dominant shrub in this area is the antelope brush, a gangly plant that is covered with fragrant yellow blossoms in spring.

Wildflowers abound in spring and early summer when the soil still carries moisture left by the meager winter snowpack.

Visitors can experience this natural diversity in several short drives. Meadowlark Road climbs east of Black Sage Road in Oliver at the south end of Burrowing Owl Vineyards; at the end of the road is a small parking area and trails through native desert grasslands with a great view of Osoyoos Lake and the Okanagan River.