In the Western Canadian province of British Columbia, near the very bottom of Canada, there is a desert 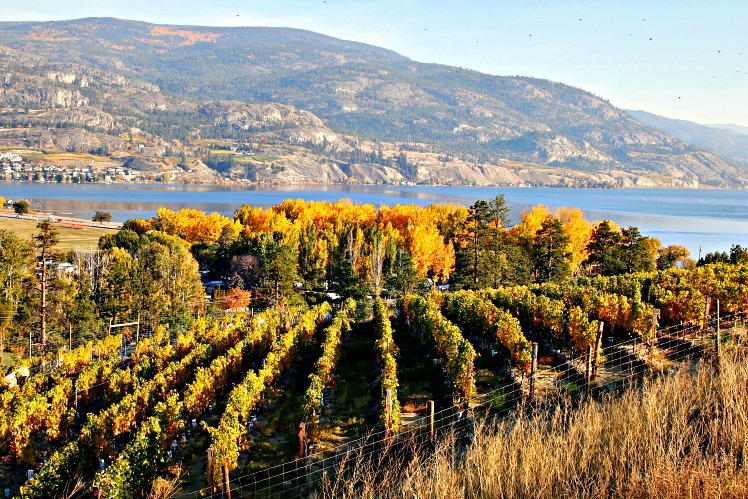 The Okanagan is characterized by a dry, sunny climate, beautiful landscapes, and a series of lakes. The region receives less than 12 inches of rain and two inches of snow annually and is the hottest and driest place in Canada. On the horizon are mountains of green foliage, aqua blue lakes, and, in the distance, rolling vineyards as far as the eye can see.

The Okanagan Desert, defined as an antelope brush ecosystem, is just a small narrow finger stretching past the U. S. border and nearly reaching the city of Penticton. Surrounding the desert, however, are grasslands that look and feel as arid and dry as the official desert territory. But within this land, there is fertility. The desert and sandy slopes and benches that make up the South Okanagan also doubles as wine country, bursting with goodness.

Before becoming a wine destination, the Okanagan was a family holiday spot, best known for its “beaches and peaches”—the lakes with their sandy shores, boating, and waterskiing as well as the countless farm stands offering fresh produce and fruit. The beaches and peaches—and cherries, apricots, apples, and pears—are still there, and the Okanagan still welcomes families. With its mild, dry climate, the region is also popular with golfers, hikers, and bikers.

Two towns are standouts for their concentration of vineyards and wineries: Oliver (named for long-ago British Columbia Premier John Oliver) and Osoyoos (which shares a name with one of seven Okanagan tribes (called “bands” in Canada); pronounce it “oo-SUE-yooze”). Together the towns boast 39 wineries that extend from the lush valley into the semi-arid mountains that surround the area.

Wine tasting here is as much about the surroundings as the wine itself. Wedged between the Cascades and the Columbia Mountains, the Okanagan Valley enjoys hot summers and mild winters unique to Canada—it constitutes the country’s only temperate desert region.

Osoyoos Lake, the warmest lake in Canada, is particularly suited for a dip early in the morning before the beach traffic reaches its busy peak, a blissful way to start a day packed with even more wine tasting.

Although the premium Okanagan Valley wine industry didn’t begin until the late 1980s, it’s booming now with over 180 licensed wineries.

After dabbling for decades in easy-to-grow hybrids and labrusca (native American varieties), the Okanagan wine industry got its real launch in 1988. In a move designed to counter the North American Free Trade Agreement’s negative effect on the Canadian wine industry, the government began paying growers to pull out labrusca and French hybrid vines and replant with the more desirable European (Vitis vinifera) grape varieties.

Today, most vines in the Okanagan Valley are less than 25 years old and many of its wineries are still run by the families who started them.

The wide diversity of growing environments in the Okanagan means that the region is suited to an unusually varied selection of grape varieties.

The top white varietals include Chardonnay, Sauvignon Blanc, Pinot Gris, Pinot Blanc, Gewurztraminer, and Riesling with some grapes being left to freeze on the vine for the region’s famed ice wines. These are concentrated, sweet dessert wines often served in chocolate shot glasses.

The summer beach experience and tree-ripened fruit are still part of the Okanagan’s unique charm. But now the RV also comes back loaded with cases of wine.

Anyone who tries to make you believe that he knows all about wines is obviously a fake.