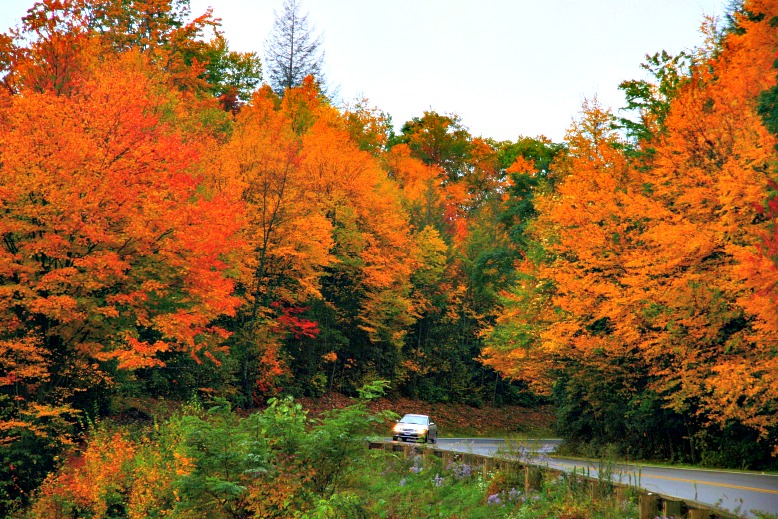 Great Smoky Mountain National Park has one of the world’s best-preserved deciduous forests, the oldest mountains in the United States, and more annual visitors than any other national park in the country.

The 33-mile long Newfound Gap Road (U.S. 441) bisects the park, stretching from Gatlinburg, Tennessee to Cherokee, North Carolina with incredible views. Clingmans Dome is just past the “gap,” commonly referred to as “pass” in other parts of the country.

With an estimated 900 miles of trails, Great Smoky is a hiker’s haven, one that could occupy you year-round. You could focus on the 70-some miles of the Appalachian Trail that runs along the roof of the park or break Great Smoky into regions and hike them one at a time.

Although there are many national parks that are larger, the Great Smoky Mountains have the greatest diversity of plants anywhere in North America. The Smoky Mountains contain more than 300 rare species of plants with as many as 125 on the protected plant lists of either North Carolina or Tennessee.

The Great Smoky Mountains have an explosion of wildflowers in spring and summer. More than 1,500 flowering plants can be found in the region, including delicate spring beauties, several types of trillium, trout lilies, wild geranium, and orchids; visit from mid-April to mid-May for the best blooms. The park’s showy flame azaleas and rhododendrons also burst to life starting in April in the low elevations and into June up high.

Related: Springtime in the Smokies

The Smokies are famous for their colorful trees in fall. Drive or hike to the higher elevations for sweeping views over the park’s 100-plus tree species painting the hills in bright oranges, yellows, and reds. Peak leaf season is impossible to predict since it is dependent on rain, temperature, and other factors. Generally, you can target the second half of October for higher-elevation colors, and late October through the first week of November for lower elevations.

Before it became a national park, this landscape was home to many settlers who farmed and milled in its hidden valleys. Today, more than 90 historic buildings remain in the park. In Cades Cove, you’ll find the greatest variety of churches, mills, barns, and cabins dating back to the early 1800s. An 11-mile one-way loop road takes you through a lush valley surrounded by mountains. For a quieter ride, head to the Roaring Forks motor nature trail with views of rushing streams, old log cabins, another mill, and forested wilderness.

Visit Oconaluftee to tour the Mountain Farm Museum, a collection of structures from the late 1800s, or nearby Mingus Mill. Other beautiful drives include the 18-mile Little River Road from the Sugarlands Visitor Center to Townsend and the Blue Ridge Parkway (outside of the park).

Related: Now Is the Best Time to Visit the Smokies

While Cades Cove with its rich collection of homesteading cabins, corn cribs, smokehouses, and churches is arguably the most popular area of the park, much the same history can be discovered without the crowds in Cataloochee (Big and Little Cataloochee). A little over a century ago this was one of the region’s most thriving communities with 1,200 residents in 1910. Today, though, it draws no crowds to its historic buildings, rolling orchards, meadows or forests, which do, however, attract elk, wild turkeys, and black bears.

Nestled near the park’s eastern border, you must negotiate a winding 11-mile gravel road found near Dellwood, North Carolina, to reach Cataloochee. This road will carry you back into a 19th- and early-20th century landscape rimmed by 6,000-foot mountains and some of the park’s best examples of historic frame buildings from the late 1800s and early 1900s. Still standing is the Palmer House, a vintage “dog trot” construction featuring two separate log cabins (that later were planked over) tied together by a covered porch popular with dogs on long, hot summer days. These days the house doubles as a museum of the valley and offers a video that provides an interesting oral history provided by descendants of the valley’s settlers.

As you can see, Great Smoky holds more wonders and adventures than one visit can embrace.

If you drive to, say, Shenandoah National Park, or the Great Smoky Mountains, you’ll get some appreciation for the scale and beauty of the outdoors. When you walk into it, then you see it in a completely different way. You discover it in a much slower, more majestic sort of way.