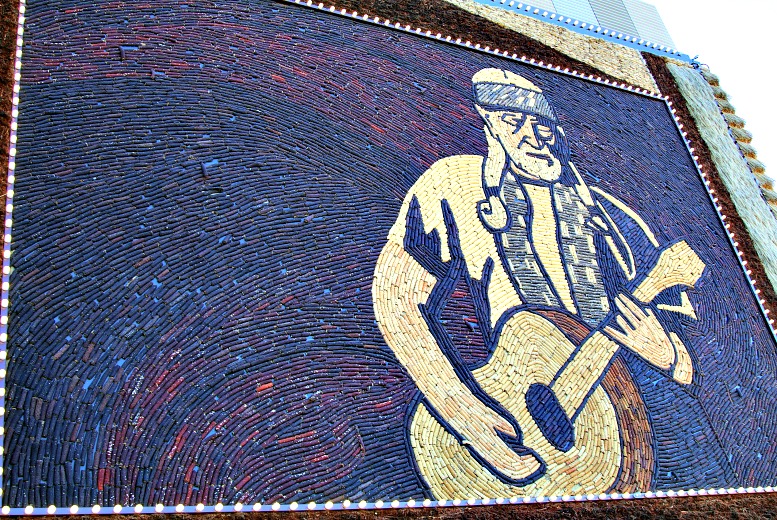 Road trips are an unpredictable and intimate method of exploring a place. Foregoing the long-distance leaps between airports, traveling via RV presents an opportunity to view the world on a micro-level by exploring the well-traveled and off-the-beaten-path attractions.

With wanderlust and weirdness in mind, we road-tripped across the country and found the oddest, most wonderful, and puzzling roadside attractions where least expected. Better stock up on boudin and pork cracklins, kolache and doughnuts, and other snack foods: there are going to be many, many detours in your future.

Sleep in a Wigwam

Have you slept in a wigwam lately? In the arid Arizona desert, the Wigwam Village Motel in Holbrook still provides Route 66 aficionados the opportunity to “Sleep in a Wigwam!”

Fifteen concrete and steel freestanding teepees are arranged in a semi-circle around the motel office. Each teepee is 21 feet wide at the base and 28 feet high. The teepees are painted white with a red zigzag above the doorway. If you were to focus on the front door, ignoring the quirky architecture that drew you here in the first place, you might think you’re entering a Hobbit-hole. Vintage automobiles are permanently parked throughout the property, including a Studebaker.

Related: Blow Your Mind at the Weirdest Roadside Attractions across America

The landscape of the Anga-Borrego Desert has been changed forever by the appearance of prehistoric creatures that pop up alongside the roadside: Prehistoric elephants. A saber-tooth cat. An ancient camel.

A T. rex and a giant bird of prey. Not the flesh-and-blood kind, but remarkable art pieces—sometimes whimsical, sometimes haunting—are the one-of-a-kind works of sculptor Ricardo Breceda whose creations delight and surprise drivers near the town of Borrego Springs in southeastern California.

One of the largest pistachio tree grooves in New Mexico, PistachioLand is the home of the World’s Largest Pistachio, Pistachio Tree Ranch, McGinn’s Country Store, and Arena Blanca Winery.

The World’s Largest Pistachio was built in honor of PistachioLand’s founder, Thomas McGinn. After his passing in 2008, his son, Timothy McGinn erected the 30-foot sculpture in memory of his father. Tim wanted everyone who passed by PistachioLand to take note of what his dad created, a 111-acre pistachio orchard and vineyard started from bare desert land in 1980. From the first trees planted to today, PistachioLand now is home to over 12,000 pistachio trees and 14 acres of wine grapes.

Related: What You Need to Know to Have a Perfect Road Trip

Restless spirits have plenty of reasons to stalk the living, and regardless of personal beliefs about the afterlife, people out there are convinced they’ve seen these ghostly apparitions with their own eyes. No matter your destination, there’s bound to be someplace haunted along the way. Board the Trolley of the Doomed and hear about Savannah’s most haunted venues.

One of (if not the) the most prominent tourist traps has to be Wall Drug. The first time you see one of the charming, hand-painted Wall Drug signs on the highway leading to South Dakota, you’ll be charmed. By the 100th time, you’ll be confused, maybe swearing off visiting out of principle. But Wall Drug cannot be avoided if you’re on I-90, largely because it’s the last stop for fuel before/after the Badlands.

An Encounter with the World’s Largest Roadrunner

The roadrunner is the official state bird of New Mexico. A giant recycled roadrunner—20 feet tall and 40 feet long—has been an icon of Las Cruces ever since artist Olin Calk built it in 1993. It was made exclusively of items salvaged from the landfill.

In early 2001, Olin stripped off the old junk, replaced it with new junk, and moved the roadrunner to a rest stop along Interstate 10, just west of the city. Signs around the sculpture warned of rattlesnakes, but when we stopped by to visit people were blissfully trudging out to the big bird anyway, to pose for snapshots or examine the junk (We did, too).

Nestled in the scenic hills of Desert Hot Springs, a Hopi-inspired pueblo sits against a hillside. Not just any pueblo but one built with natural materials collected throughout the desert. Yerxa’s pueblo is a four-story, 5,000 square foot structure. It has 160 windows, 65 doors, 30 rooflines, and 35 rooms. When homesteader Yerxa Cabot settled in Desert Hot Springs, he used re-purposed materials and a little ingenuity to build a home so unique it remains a preserved museum to this day.

Designed by Santiago Calatrava the Sundial Bridge is an architectural marvel. The glass decked, cable-stayed cantilever suspension bridge reaches 217 feet into the sky and, spans 710 feet across the Sacramento River, and is one of the world’s largest working sundials.

As an environmentally-conscious structure, Sundial Bridge was intentionally constructed without river footings to leave the salmon-spawning habitat below undisturbed. The deck is surfaced with translucent glass which is illuminated from beneath and glows aquamarine at night. Sundial Bridge also inspires onlookers with its “bird in flight” design, symbolizing overcoming adversity.

More Than a Potty Stop

You’re driving down US Highway 191 (south of Moab, Utah) thinking vaguely of finding a place to pull over and stretch, maybe get some snacks, when you see, in the distance: a massive red rock face with blazing white detailing. Then you drive closer. “HOLE N” THE ROCK”. Is it literally a hole in the rock? Kinda, like yes!

Hole N” The Rock is a 5,000-square-foot home carved into the rock where you’ll also find a trading post, general store, art collection, and petting zoo—camels, zebras, albino raccoons.  You are wondering whether you can feed them, yes you can.

Related: 8 Weird and Wacky Destinations for a Family Road Trip

Superstition Mountain Lost Dutchman Museum is the keeper and purveyor of the colorful tales of bygone days, both true and mythical, regarding the area. Located on the Apache Trail (Arizona Highway 88), the museum is comprised of numerous outdoor structures including the Apacheland Barn and the Elvis Chapel, the last surviving structures from Apacheland Movie Ranch, a huge working 20-stamp gold mill, a historical model railroad, Western storefronts, an exhibit hall and gift shop/bookstore, and nature trail.

You can’t miss it as you drive down I-85 in South Carolina. The Peachoid, as it’s called, is a massive peach-shaped water tower. In Gaffney, the Peachoid is more than a water tower. According to official literature, the Peachoid boldly “sets the record straight about which state is the biggest peach producer in the South. Contrary to popular belief, it is NOT Georgia.”

Without a doubt, the best known, most photographed water tank in America. It is painted to resemble a giant peach.

Remember the story of the Three Little Pigs, specifically the portly porker who made his house out of straw? Perhaps he’d have been better protected if he’d used a stronger material, maybe something along the lines of corn and grain. Or maybe he should have just hired the architectural crew that built the “World’s Only Corn Palace.”

The Mitchell Corn Palace, in Mitchell, South Dakota, is truly a spectacle. The massive building is comprised entirely of corn and local grains. This includes the structure, decorations, and even some impressive corn murals. The palace is so famous in the area that it plays host to a variety of events. You can even book and host your own event.