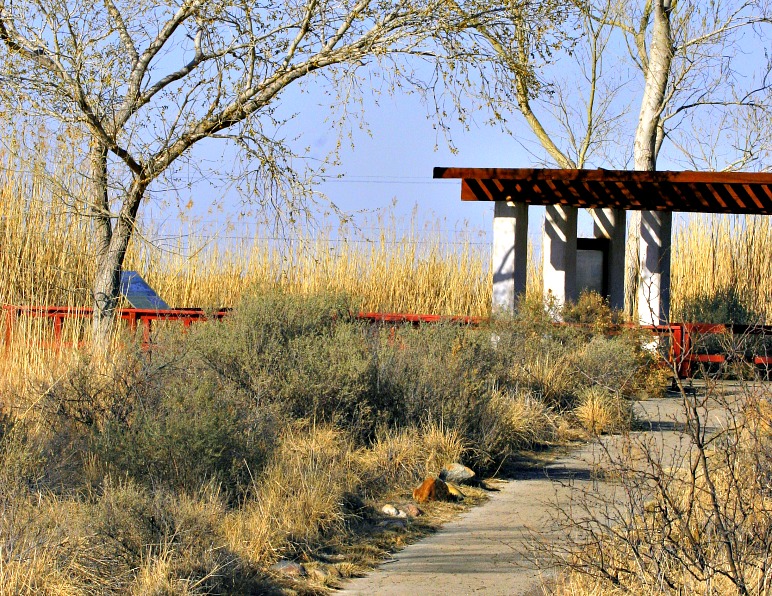 Every corner of the Lone Star State serves up its own version of Texas terrain, from mountains to beaches and well beyond. And less than five percent of its land is publicly owned. In all, the Texas Parks and Wildlife Department oversees nearly 100 parks, historic sites, and natural areas across the state. The National Parks Service operates 16 more public spaces including national parks, monuments, recreation areas, preserves, trails, and memorials. Below, I’ve picked 10 of my favorite state and national parks in Texas to plan a trip around.

It’s hard to imagine finding a giant blue-green swimming hole swirling with fish in the middle of a desert but that’s what beckons at Balmorhea State Park where more than 15 million gallons of water flow daily from San Solomon Springs into a 25-foot deep pool with a natural bottom. Native Americans, early explorers, and passing U.S. soldiers have all watered up here and in the 1930s, the Civilian Conservation Corps turned the desert wetland into the largest spring-fed swimming pool in the world.

Now, it’s popular with land-locked scuba divers, swimmers, and anyone looking to take a flying leap off a 7-foot 3-inch-high diving board. It’s also home to two small endangered species of fish: the Comanche Springs pupfish and Pecos gambusia.

At first blush, Big Bend National Park in far West Texas looks desolate and uninviting. But get out and hike its prickly folds, armed with plants that poke, scrape, and stab, and you’ll discover spectacular geologic formations and a diverse range of inhabitants from javelina to tarantulas, black bear, snakes, and mountain lions.

Backpack the South Rim high in the Chisos Mountains at the center of the park, raft the café-au-lait-colored water of the Rio Grande or explore the desert floor and the old farming and ranching ruins it holds. The largest of the national parks in Texas, Big Bend sprawls over 801,100 acres, so one thing you won’t find is big crowds. Peak season is November through April—no surprise, as temperatures can soar to over 100 degrees in summer.

Four types of carnivorous plants live in the Big Thicket and chances are you’ll be able to watch one of them turn an unsuspecting insect into a slow-cooked meal if you visit. But first, stop by the preserve’s visitor center to get the lay of the land at this diverse park which is made up of non-contiguous units that cover 113,114 acres of land and water in seven counties.

Related: 10 Things You Need To See and Do At Least Once In Texas

You’ll find sections of longleaf pine forest, swampy bayous, and wetland savannas, crisscrossed by about 40 miles of hiking trails including a few wooden boardwalks that take you past carnivorous pitcher plants. Paddlers can explore the waterways by kayak or canoe, too. Just remember to bring the bug spray.

Enchanted Rock looms like a giant pink onion, half-buried in the Hill Country scrub. It formed a billion years ago when a pool of magma pushed up through the earth’s surface and hardened into a granite batholith. Most visitors make the 30- or 45-minute beeline to the top of the 425-foot dome passing fragile vernal pools where water collects in shallow pits providing a home for freshwater shrimp.

But don’t miss the loop trail that encircles the main attraction. Pitch a tent in the primitive sites alongside Moss Lake and watch the sun cast a rosy glow on the rock—and maybe catch the eerie creaking and groaning that some report hearing at night.

Lapping water and Gulf breezes: We must be on the coast! Goose Island offers camping, fishing, and birding along St. Charles and Aransas bays. Camp, fish, hike, geocache, go boating and observe and take photos of wildlife, especially birds. Fish from shore, boat, or the 1,620-foot long fishing pier.

Related: Spotlight on Texas: Most Beautiful Places to Visit

Choose from 44 campsites by the bay or 57 sites nestled under oak trees, all with water and electricity. Every camping loop has restrooms with showers. Be sure to visit the Big Tree which has been standing sentinel on the coast for centuries and has withstood several major hurricanes.

If you’re looking for a history lesson during your next park outing, consider Lyndon B. Johnson National Historical Park a two-in-one immersion into rural Texas life in the 1950s. First, tour the grounds of President Johnson’s boyhood home in Johnson City then drive 14 miles to the LBJ Ranch and Texas White House where you can drive past his birthplace, a show barn, a small schoolhouse, and the Texas White House (which is temporarily closed to indoor tours due to structural issues).

As you make the rounds, imagine the former president known for pulling pranks on his guests—like the time he loaded dignitaries into a vehicle, rolled it down a hill, and into a pond, hollering that the brakes had given out. He didn’t tell them it was an amphibious vehicle designed to drive on roads and float in the water. Time your visit for early spring to coincide with the annual bluebonnet display.

In the Rio Grande Valley, you’ll find wonderful bird-watching opportunities. Approximately 360 species of birds have been spotted at Bentsen-Rio Grande. Butterflies, javelinas, bobcats, and more have also been seen at the park.

You will definitely want to bring your binoculars for birding with you. Like many other state parks, nature is the most intriguing part of the journey. Cars are not allowed to park on-site to help preserve nature. You can leave your car at headquarters and explore on bike, foot, or even tram.

Grab your swimsuit and aim for Padre Island National Seashore which hugs 70 miles of the Texas Gulf Coast on the longest stretch of an undeveloped barrier island in the world.

Splash in the ocean, admire birds (including the Pepto Bismol-colored Roseate spoonbill), sail, fish, and, during the summer, watch Kemp’s Ridley sea turtle hatchlings dash across the sand as scientists release them into the wild. Many a Spanish ship met its fate off the coastline here and visitors can park an RV or pitch a tent on the beach.

Listen to Onion Creek flowing over limestone ledges and splashing into pools. Follow trails winding through the Hill Country woods. Explore the remains of an early Texas homestead and a very old rock shelter. All of this lies within Austin’s city limits at McKinney Falls State Park.

Think of the park as Austin’s backyard; we’re just 13 miles from the state capitol. Here you can camp, hike, mountain or road bike, geocache, go bouldering, and picnic. You can also fish and swim in Onion Creek. Hike or bike nearly nine miles of trails. The 2.8-mile Onion Creek Hike and Bike Trail have a hard surface, good for strollers and road bikes.

A mystical place where the wind sculpts sand dunes into peaks and valleys, Mon­a­hans Sandhills offers a Texas-sized sand­box for kids of all ages as well as a close-up view of a unique desert environment. These natural sand dunes are ever-changing and worth stomping around after a few hours behind the wheel.

Stop here for a picnic or sled down the swirling dunes on rentable plastic lids if you’re so inclined. Entry is $4. And spend the night at one of the 26 camping sites with water and electric hookups, a picnic table, and shelter. Camping is $15 nightly plus the entry fee.