How did a traditional Czech pastry became a Texas bakery staple? 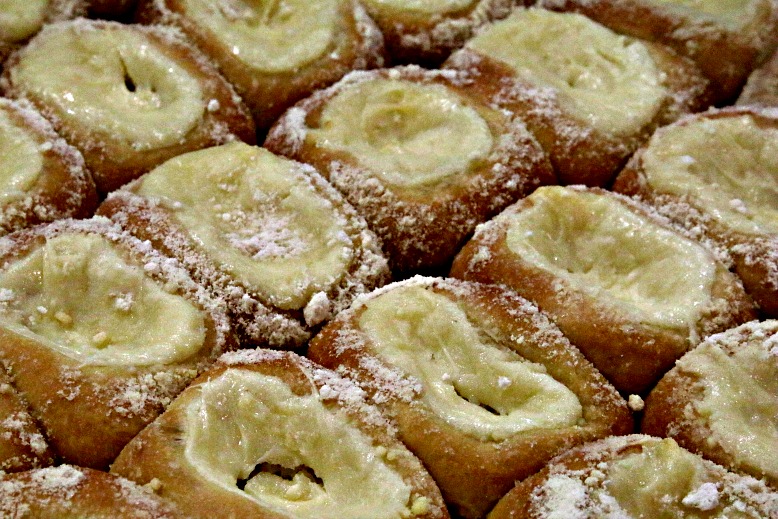 You know what they say: If life is a highway as sung by Tom Cochrane in Mad, Mad World (1991) and Rascal Flatts in Cars, a computer-animated sports comedy film (2006), I wanna pull over, get a Texas-size kolache (fruit or cream cheese-filled Czech pastry) and pick up the road trip later.

Kolache are round sweet-bread pastries with prune or poppy seed filling. They are considered to be Czech but deliciousness knows no borders and the neighboring cultures picked them up—including the Slovaks whose similar language uses the same word. While in Czech a kolach (KOH-lahch) is singular and kolache (ko-LAH-chee) is plural, the latter is sometimes used in the U. S. as singular. So you may sometimes hear kolaches (ko-LAH-chees) for the plural of the word.

Say it as you will, but I had never heard any form of the term until I spent my first winter in Central Texas where I found not just kolache for sale in bakeries but kolache franchises such as Kolache Factory. But what made Texas so kolache-friendly?

In the 19th century, an abundance of land to settle and a list of grievances against the old-world homeland compelled waves of Czech immigrants to sail halfway around the world to Texas. Those grievances included various political frustrations ranging from feudalism and nationalism within the ruling Austrian Empire to religious persecution, conscripted military service, and a lack of freedom of the press.

Related: 10 Things You Need To See and Do At Least Once In Texas

Czechoslovakia is probably not the first country that comes to mind when people set out to identify the ethnic influences on Texas food. However, any Central Texan who has ever sunk their teeth into the soft, yeasty cloud of a fruit kolache knows that Czechs bring a delicious contribution to the Texas culinary table.

Czech immigrants began arriving in Texas during the mid-to-late nineteenth century entering through the busy port of Galveston and spreading out through the central part of the state. At one point that area had over 200 Czech-dominant communities.

They settled in rural areas and became farmers and craftsmen whose society revolved mostly around family life and the Catholic Church. The Czechs rich cuisine was based on roasted meats with noodles and dumplings; homemade sausages, potatoes, and sauerkraut; and baked goods such as fruit strudels and kolaches.

Kolaches came to the Lone Star State with 19th-century immigrants from Bohemia, Moravia, and Silesia and continued making their native pastries over wood stoves when they settled in Central Texas. The kolache is the most prominent edible symbol of Texas Czech culture.

Kolaches are made with sweetened yeast dough formed into rolls and filled with fruit or cheese before baking.

Birds of a feather flock together and today you can find many Texas communities with Czech roots. A region known as the Texas Czech Belt is a line of towns and counties that starts less than an hour south of Dallas and runs about 180 miles straight down the map to the town of Yoakum, Texas, just south of I-10 between Houston and San Antonio.

Cultural centers and museums are abundant as are Czech festivals as those places proudly celebrate their roots. But if there’s anything that tends to last long after the generations have passed, it is food. And the Czech kolach is the star of the show.

The kolach, as with a croissant or Danish pastry, is made using yeast, resulting in a more bread-like character rather than cakes, cookies, or pie crusts. The pastry is circular and measures about 3 to 4 inches in diameter. The filling is laid into an open depression in the middle though I’ve also seen them with the pastry corners folded up together over the top to allow the filling to peek out of little openings after baking.

Several bakeries in Fayette County feature a sausage wrapped in kolach fashion. This, to be honest, is not a kolach but a klobasnek (plural klobasniky), a delicious creation originating in the Czech immigrant population in Texas. To many Americans, a sausage in a pastry is a “pig in a blanket.” The true kolach is sweet, never meat-filled or savory.

So where can you find the best or the truest kolaches? Those are opinions folks fight you over with a passion. A good place to start is with festivals dedicated to the pastry.

The annual Kolache Fest, one of the largest such festivals, takes place in late September in Hallettsville. More than 3,000 people attend and gobble up the thousands of kolache produced by the local Kountry Bakery which uses the recipes passed down by three generations of the Czech American Besetsny family. The festival includes polka music, a car show, a parade, arts and crafts, a BBQ cook-off (it’s still Texas), loads of other food, a kolache-eating contest, and a 5K run to burn off some of those calories. Central to the festival is a bake-off, the winner of which is crowned the Kolache Queen. It’s a huge deal for a sizeable Czech community.

In 1989, the Texas state Legislature declared the town of Caldwell the “Kolache Capital of Texas.” The city of West received similar honors as the “Home of the Official Kolache of the Texas Legislature” in 1997. Both of those places also have festivals that honor kolache. Draw a line through all three on the map and you’ve got the Czech Belt.

Always the second Saturday of September, the Burleson County Kolache Festival, held in Caldwell, celebrated its 36th year in 2021. Septuagenarian Joe Rycalik, a local Czech speaker, opened the festival in the Czech language. Another proud local, 40-year-old Zach Zgabay who traces his roots all the way back to what’s now Czechia or the Czech Republic felt that language played an important part in the preservation of culture so he returned to college to learn Czech. If Rycalik retires, Zgabay may one day open the festival in a similar fashion.

Several local bakeries collaborated to bake roughly 12,000 kolache. They went on sale at 8 a.m. and sold out by 2 p.m. The festival also includes a baking competition in 12 classes including apple, apricot, cheese, cheese, and other combination, peach, poppy seed, prune, and other fruit. There’s also an activity I might be more inclined to participate in Kolache Eating. But if you’re not in Texas, you may have to bake your own.

Just north of Waco, the small town of West (known for clarity’s sake as “West Comma Texas”) is the state’s kolache capital where descendants of Czech immigrants make these little square pastries that hold a dollop of fruit rimmed by a puffy pillow of supple dough.

“Koláče are sold warm from the oven,” assures the sign above the counter at the Village Bakery, a shop with three small tables and one circular ten-seat table that hosts a community coffee klatch most mornings. Apricot and prune are the flavors favored by old-timers along with poppy seeds and cottage cheese. Tourists tend to like fruitier versions—apple, strawberry, blueberry—as well as those made with cream cheese.

One of the best spots to grab a kolache is Weikel’s Bakery in La Grande. Here you find cinnamon rolls, strudel, cream cheese pound cake, pecan sandies, and cookies of all kinds, plus a repertoire of a dozen kolaches. The kolache is Weikel’s specialty, the shop’s motto (on the highway billboard): We got’cha Kolache.

The bakery has become a traditional stopping point for many travelers on Highway 71 between Austin and Houston. Some say this Czech bakery’s kolaches are the best in the state. Don’t worry—you don’t have to squeeze every flavor into one trip… Weikel’s will ship these goodies anywhere in the country!

While in La Grande, “Czech” out the Texas Czech Heritage and Cultural Center. This museum gives visitors a feel for the culture and early days of Fayette County when thousands of Czech immigrants populated the area.

You can start your day in Schulenburg by indulging in the Czech breakfast of champions: kolaches. I’m drawn to the buttery goodness of traditional fruit kolaches at the Original Kountry Bakery. The first one melted in my mouth so quickly that I had to grab a few more to go. Kountry Bakery’s stew and chili are also lunchtime favorites. And the best part about eating lunch at Kountry Bakery is all the sweets to pick up for dessert.

After our visit to the Spoetzl Brewery in Shiner, we stopped for dessert at Friday’s Fried Chicken. Don’t let the name throw you off. They have a full menu and a bakery. Friday’s named after the Patek family (Patek means “Friday” in Czech), offers some of the best-fried chicken south of the Colorado River—along with those Bohemian delicacies known as rosettes, kolaches, and a variety of delicious pies including pecan. Friday’s Fried Chicken is about a half-mile from the brewery on the left as you head into town.