Exploring the possibility that the best apple pie in the U.S. is in the little gold rush town of Julian, California 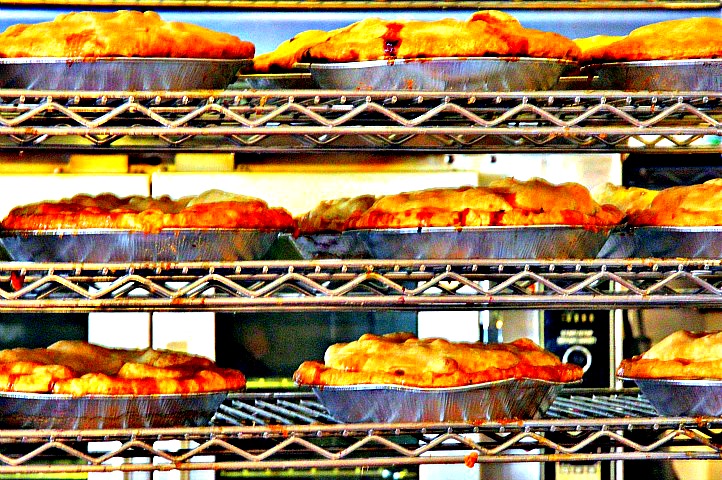 It’s no exaggeration to say that America has a fascination with apple pie. In fact, it’s an obsession. And pretty much every town in the country claims to have the best.

I can understand the fixation; for as long as I can remember, of all desserts, hot apple pie with a scoop or two of ice cream will get me every time. I think I must be a little bit American!

So when I discovered we were just a day trip away from a town famous for its apple pies, I was very excited.

Julian is a historic mountain town about two hours out of Palm Springs. Like so many towns in the Southwest, Julian was founded on mining. In the winter of 1869, former slave A.E. “Fred” Coleman, a cattle rancher who lived near present-day Julian, found gold in a mountain stream.

His discovery kicked off the area’s only gold rush. Today, visitors can get a taste for gold rush-era Julian by panning for gold at the Julian Mining Co. or taking an hour-long tour into old mineshafts at the Eagle Mining Co.

The town thrived briefly and became the hub of the area for business and social gatherings. During the boom, there were 50 houses, a schoolhouse, restaurants, saloons, and, of course, a brothel or two.

While many boomtowns eventually became ghost towns, Julian had more to offer than mining. At an elevation of 4,200 feet, it has a mild climate and rich soil, ideal for growing quality fruit. While many crops were planted and animals pastured, Julian proved to be a fine place to grow apples.

Another scrumptious dessert: Why I Love Blue Bell Ice Cream

As early as 1893 Julian apples took some of the top prizes in the Chicago World’s Fair and are still the reason many visitors flock to this mountain town. Julian apples, “Twenty-one varieties of well-grown and carefully selected apples”, received the Bronze Wilder Medal, a top honor, from the American Pomological Society at the 1907 Tri-centennial Exposition held in Jamestown, Virginia.

Apple picking season in Julian arrives in early September and lasts until Mid-October. You can buy just-picked apples and fresh-pressed cider without leaving Main Street at the Julian Cider Mill or head to any number of U-Pick locations outside town, like Calico Ranch or Apple and Art Orchards.

But even if your trip doesn’t coincide with the harvest you can still enjoy the spoils: there’s no shortage of bakeries in town, and everyone you ask will have a personal favorite.

Another scrumptious dessert: Along the Kolache Trail

There are four pie shops here:

The biggest name in town (and possibly in the West) is Julian Pie Company. Along with the most widely distributed apple pie throughout Southern California, they carry more than 20 pie varieties, apple cider donuts, apple nut bread, and “apple memories,” bits of extra pie crust cut out into hearts that are perfect to snack on during the drive home. Julian Pie Company whose pies you can find in stores all around SoCal is popular for a reason. A short crumbly pie crust, juicy, oozy filling, soft, rich apple, and a crisp delicate pastry bottom! Perfect.

And, Mom’s Pies are a close runner-up. A tasty, mouth-watering homemade pie, Mom’s flakey crusts, and not-too-sweet fillings are delicious. At Mom’s Pie House, you’ll find a laundry list of pie options and other equally delightful confectionary goodness but not to be missed are their apple dumplings loaded with brown sugar, cinnamon, and nutmeg and baked in cream cheese to absolute perfection.

An unassuming spot right off the main drag, Apple Alley Bakery turns out a delicious apple pecan pie with a crunchy crumb topping plus a killer lunch special that includes your choice of a half sandwich and a side of soup or salad and a slice of pie for dessert.

Also noteworthy, Julian Cafe and Bakery’s boysenberry-apple is the perfect mix of sweet and tart.

True to its southern California roots, beer, wine, and hard apple cider isn’t hard to come by in Julian. A good place to start is Calico Cidery, a dog-friendly cider farm and super scenic spot to lounge under the shade of huge oak trees and sip handcrafted hard ciders made from apples and pears grown exclusively on their ranch.

Fun fact: It was on the property of Calico Ranch that Fred Coleman first discovered gold in 1870, sparking the Julian gold rush.

Over at Nickel Beer Company (1485 Hollow Glen Road; ½- mile east of downtown Julian), 16 taps of house-brewed beer and plenty of outdoor seating are always on the table—just don’t miss the Apple Pie Ale, Volcan IPA, or Hidden Fortress Double IPA and feel free to grab a growler for the road.

And at Julian Hard Cider (4470 Julian Road), you can pull up a chair outside of the cider bar and try a flight of ciders with adventurous names like Razzmatazz and Freaky Tiki (though of course, you can’t go wrong with their traditional Harvest Apple).

Another scrumptious dessert: Getting in our Licks on National Ice Cream Day

Julian is also a popular destination for those who want to get out for the day, hike, see historic sites, or explore the scenic backroads. It’s not on the way to anywhere for most folk, but if you’re even close it’s well worth visiting for a day or two. Many visitors come just for their love of apples and apple pie, the products for which Julian is famous.