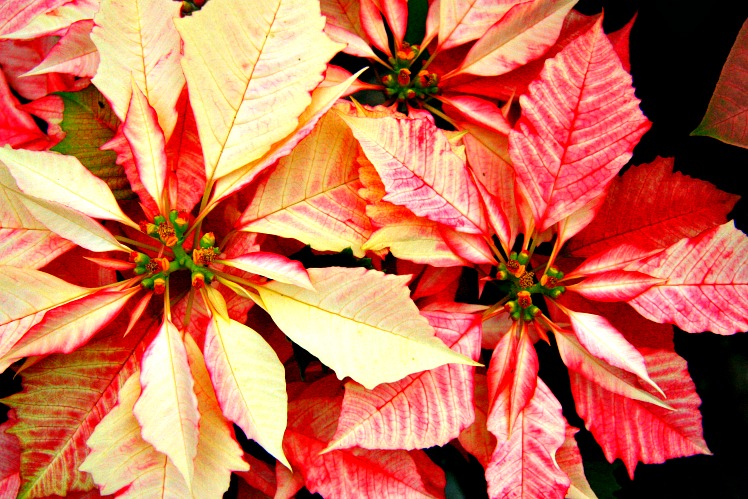 There are certain plants that play important and often mysterious roles in holiday traditions and celebrations all over the world. From the Egyptians who decorated trees during the winter solstice to the Pagans and Druids who used mistletoe in their winter customs, stories abound of plants that have become infused into the mythologies of cultures and regions.

The long, strange tale of the Poinsettia

The poinsettia’s story is just as unique as the rest. Despite this celebrated plant’s prominence during the holiday season, its story remains largely unknown—until now.

The story of the poinsettia is one that spans hundreds of years and contains countless twists and turns as it wound its way into our holiday traditions. Although it doesn’t pre-date Christianity like its Christmas counterparts, the holiday season wouldn’t be the same without the reds and greens of the poinsettia.

Cuetlaxochitl: the origin of the Poinsettia

To begin, we go back to 14th century Mexico. The plant had a long history of medicinal use. It was said that its milky white sap, called latex, could be used to reduce fever symptoms. The plant was so highly prized in an Aztec culture that “Cuetlaxochitl,” as the plant was known, was also used to create red and purple dyes for clothing and textiles.

These wild Mexican plants were 12 to 15 feet tall with only 1 or 2 stems. The red floral bracts were quite narrow and droopy as compared with those of modern poinsettias and they had large open centers.

It is said that Montezuma, the last of the Aztec emperors, was so captivated by the plant that he would have caravans of poinsettias shipped to the capital city of Teotihuacan because the plants could not grow at the high altitude.

However, it wasn’t until the 17th century that Cuetlaxochitl, now an established decorative plant in Mexican tradition, began its journey into Christmas traditions.

This part of the journey began in the small town of Taxco de Alarcon, Mexico where Franciscan monks began using the shrub in their Nativity processions. Coincidentally, it is also around this time that the Mexican legend of Pepita and the “Flowers of the Holy Night” began, forever tying the red and green shrub to Christmas folklore.

Pepita and the Poinsettia

According to legend, a young girl named Pepita was traveling to her village to visit the Nativity scene at the chapel. Since Pepita did not have enough money to buy a present to give the baby Jesus at the services, she gathered a bundle of roadside weeds and formed a bouquet.

Upon entering the chapel and presenting her bouquet to the Nativity Jesus, the bouquet of roadside weeds miraculously turned into a bouquet of beautiful red flowers that the locals knew as Cuetlaxochitl.

The namesake of the Poinsettia

During this time, the poinsettia’s association with Christmas was almost entirely confined to small Mexican towns and their local folklore. It remained relatively obscure for almost two hundred years before a man by the name of Joel Roberts Poinsett (1779–1851) introduced it to the United States. This introduction forever changed the way we decorate for the holidays.

Joel Roberts Poinsett was a man of many talents. He was not only the first person to introduce poinsettia to the United States, but he was the first U.S. Ambassador to Mexico and was also a skilled and passionate botanist who co-founded the institution that we now call the Smithsonian Institute.

In the winter of 1828, Poinsett took a diplomatic trip to Mexico on behalf of President John Quincy Adams. He visited the Taxco area where he wandered the beautiful countryside and became enchanted by the brilliant red leaves of an unfamiliar plant. Poinsett kept a greenhouse on his property in South Carolina and began shipping the blooms back to his home. There, he studied and carefully cultivated the plants.

It wasn’t long before he began sharing the plants among his friends and colleagues around Christmas time. This was when the upper leaves of the shrub would turn red. The reputation of the enchanting Christmas plants spread and soon a Pennsylvania nurseryman by the name of Robert Buist began to cultivate poinsettias. Buist would be the first to sell the plant to the public under its botanical name of Euphorbia Pulcherrima. He also played a large role in helping to establish the plant’s Christmas reputation.

It wasn’t until about 1836 that the plant formally attained its popular name of “Poinsettia” after the man who first brought the plant to the U. S. and ignited a holiday tradition that continues to this day.

In the early 1900s, poinsettia began to gain popularity. Paul Ecke Sr. developed the first poinsettia plants that could be grown indoors. He began selling them at roadside stands in Hollywood, California. In 1923, he founded the Ecke Ranch that today provides nearly 80 percent of the plants that are bought and sold in the country.

Today, the poinsettia is the most popular plant sold during the holidays and the best-selling potted plant in the U. S. Within a six-week period leading up to Christmas, there are over 70 million poinsettias sold and nearly $250 million in poinsettia sales accounted for.

In July of 2002, the United States Congress named December 12th National Poinsettia Day. The day honors the late Joel Roberts Poinsett who played a crucial role in making the poinsettia into the holiday fixture that it is today.

Poinsettias belong to the same family as Castor-Beans, the Spurge or Euphorbia Family, in which flowers are unisexual. Besides that, Poinsettia flowers differ in several important ways from the average flower features.

In Poinsettia flowers the large, red, eye-catching things at the ends of branches are not flower petals but rather modified leaves called bracts. Because actual Poinsettia flowers are small and inconspicuous, the red bracts take over the job of attracting pollinators.

The greenish, cuplike thing labeled “cyathium” is a structure unique to the Poinsettia’s genus Euphorbia. In each cyathium usually, there are several male flowers but only one female, and that female is attached to the cyathium’s center. However, the cyathium is too small to accommodate the males and the much larger female flower, so the female flower does something extraordinary: She sits atop a stemlike pedicel which grows so long that it bears the female ovary completely outside the cyathiume. There the female flower is labeled “pistillate flower” because she consists of nothing but the pistil (stigma, style, and ovary).

Plant breeders have produced cultivars with many other colors besides the traditional red bracts or modified leaves. There are over 100 varieties of Poinsettias available. Though once only available in red, Poinsettias are now available in pink, white, yellow, peach, purple, salmon, marbled, and speckled. They have names like Premium Picasso, Monet Twilight, Shimmer, and Surprise.

To help your poinsettia thrive in your home during the holiday season, follow these tips:

Flowers are a proud assertion that a ray of beauty outvalues all the utilities in the world.