Every January and February, the small desert town of Quartzsite is transformed by the addition of a gargantuan tent city and an influx of people in thousands of recreation vehicles 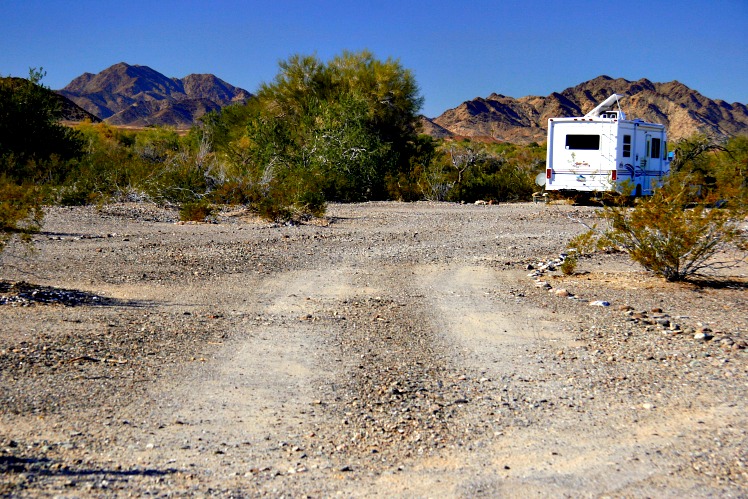 Anyone who travels a lot by RV eventually hears about Quartzsite, Arizona. Reputedly the biggest RV phenomenon in North America—may be in the entire world—started with a small-town rock and mineral show in the late ’60s and grew into a massive snowbird pilgrimage.

To those who have only heard of Quartzsite as an RV phenomenon, it may appear as mysterious as the Bermuda Triangle. The dusty little Arizona outpost is north of Yuma, two hours west of Phoenix, 20 miles west of the Colorado River, and not really near anything. Rumors about Quartzsite border on legend. Various sources claim anywhere from one to four million visitors every winter which is often exaggerated to a million RVs parked in the desert.

While there certainly aren’t a million RVs at any given time, there’s no question hundreds of thousands come to park in one of the 30-odd RV parks and enormous open Bureau of Land Management (BLM) camping areas that surround the town of Quartzsite.

It has been variously called a Senior Citizen Pow-Wow, Burning Man for Boomers, Woodstock in the Desert, The World’s Largest Flea Market, and The RV Boondocking Capital of the World.

The term boondocking, also known to RV enthusiasts as dispersed camping, dry camping, or coyote camping, is used to describe camping in the midst of nature without the use of commercial campgrounds and hookups.

As you approach Quartzsite from any point on the compass, you begin seeing them approximately 20 miles away from town: clumps, groups, and temporary communities of RVs circled around common campfire rings like wagon trains of old. The Quartzsite Valley appears as you top the hills, revealing a panorama of RVs of all sizes and shapes scattered throughout a 15-mile-diameter circle around town.

The best view of Quartzsite’s metamorphosis is from the crest of small hills a few miles west of town along Interstate 10. Many solo units also are scattered among the sagebrush. In the early morning and late afternoon, you will see tall, straight fingers of campfire smoke pointing upward from these campsites.

Hundreds of thousands of RV owners, enthusiasts, and dreamers descend on the flat, rocky desert fields surrounding the town. Folks come from all over the U.S. and Canada to behold the wonder that happens in Quartzsite every January and February. They come for the warm sunny weather, and great deals—what more can you ask for?

At its core, Quartzsite is a boondocker’s paradise. In the BLM-administered La Posa Long Term Visitor Area (LTVA), you can pay just $180 for a seven-month season of camping from September 15 to April 15.

Related Article: The Real Story of Nomadland (aka Quartzsite, Arizona)

There are no assigned spaces, no hookups, and hardly any roads. For your money, you get access to potable water, sparsely scattered pit toilets, a dump station, and trash bins. Pick a site from the 11,400 acres of open land and you’re home.

The desert landscape is transformed into make-shift RV parks, little cities within a city. The streets have no name, but the purpose is the same—to boondock in the desert, rendezvous with old and new friends, visit the rock and gem shows and flea market vendors, participate in the Sell-A-Rama, wander the RV show under the Big Tent, and soak in the wonder of it all.

The 2022 Quartzsite Sports, Vacation and RV Show (called “The Big Tent”) will run January 22-30. In 39 years, the event has evolved into the largest consumer RV show in the US. The show is heaven on earth for RVers. It’s a ton of fun with hundreds of exhibits, live shows, bargain products, and fellow RV enthusiasts. The fact that the desert is gorgeous and the temperature is in the low-to-mid 70s in mid-January doesn’t hurt either!

If you are really on a budget, you can park for free a few miles from town in non-LTVA areas administered by BLM. The only catch here is that the amenities are miles away, and technically you are supposed to stay only 14 days. No doubt many hardy souls hang around longer, commuting back and forth to town for what they need and hoping the BLM staff don’t notice.

Related Article: What Makes Arizona Such a Hotspot for Snowbirds?

No doubt also that many could afford to pay for a full-service campground for the entire season if they wanted to, but they seem to get a thrill from staying somewhere for virtually nothing. As one desert boondocker snorted when another visitor said he was going to buy a short-term permit to stay at South La Posa LTVA for two weeks (a whopping $2.85 per day): “Sure, if you want to waste money!”

No matter which option you choose, once you’ve chosen your own little spot in the desert, surrounded by creosote bushes and an occasional saguaro cactus, you are the king of your domain, free from real estate taxes, utility bills, campground fees, fuel prices, neighborhood associations, and snow.

There is something to be savored in the feeling of having very little civilization around you. It is an exercise in self-sufficiency and perhaps stubborn nature to stay the entire season, but thousands do it and thrive on the experience.

Woodstock in the Desert is an experience not to be missed—and we think you’ll like it too!