A place in the desert not to be missed 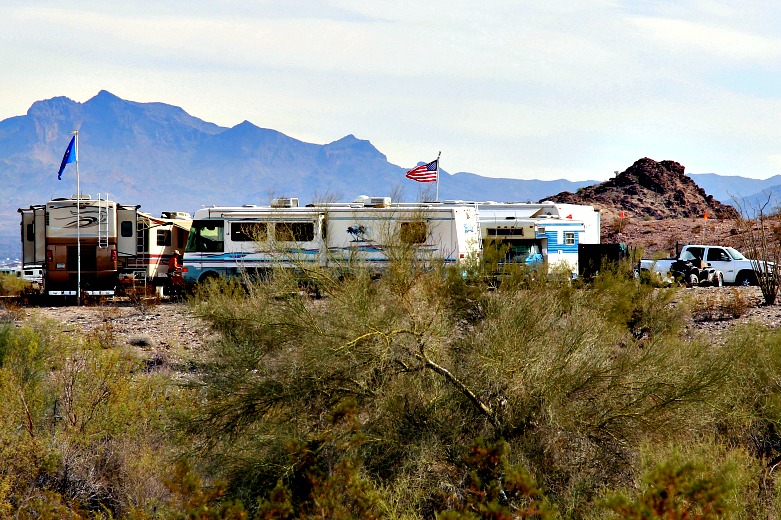 Every January something happens that is hard to believe unless you have seen it!

They come in motorhomes, travel trailers, fifth wheels, truck campers, converted buses and vans, and even in tents. There are rugged individualists, small groups banded together (circling the wagons, in a modern way), and large groups, all parked in the desert to feel the Quartzsite vibe. Some have been coming for years, returning to a favorite site which they have marked with rock-lined drives (although “saving” unoccupied sites are not allowed under BLM rules). Long-term visitors often expand their domains to include screened “porches” and massive solar panel arrays.

Quartzsite has become a mecca to visitors and exhibitors for rocks, gems, mineral specimens, and fossils during the town’s famous two-month-long gem and mineral shows and flea markets meet every January and February. From its humble beginnings, the now-massive Quartzsite show has grown to epic proportions with vendors offering everything under the Quartzsite sun.

Being close to town means being close to Interstate 10—the basic amenities that Quartzsite provides and giant flea markets which are the center of attention. Going by names such as Rice Ranch, Tyson Wells, The Main Event, and Desert Gardens, the open-air marketplaces host a variety of “shows.”

Related Article: Woodstock in the Desert

These are actually a series of events that run through the winter, specializing in hobbies and crafts, gems and minerals, jewelry, classic cars, and RVs. Most are riddled with an indescribable variation of new and old products far beyond their title, plus all the snack foods of a county fair. A lot of annual visitors simply say, “We’re going to the show,” and their RV friends know they mean Quartzsite.

The town itself features all the basic services of a southwestern desert highway stop: gas stations, barbecue restaurants, and seedy little grocery stores (several of which are run from tent-sided buildings during the season). Owing to the heavy RV emphasis there are also several places to get propane, RV supplies, and used or cheap tools.

Be warned, though. Don’t come in the summer when nothing much happens. The gypsy-like encampment will have long disappeared. Vendors start packing up in mid-February and are long gone before the snowbirds migrate north and the intense desert heat becomes unbearable.

Related Article: The Real Story of Nomadland (aka Quartzsite, Arizona)

But come winter, everything changes as the small desert community bustles with activity. RVs by the tens of thousands camp helter-skelter on the BLM land.

Originally built by Charles Tyson, Quartzsite began in 1856 as Fort Tyson, then became a stagecoach stopover called Tyson Wells and this name still echoes in the annual Tyson Wells Rock and Gem show. A mini mining boom led to its renaming as Quartzsite.

What started as a small-town mineral show in the late ’60s in western Arizona has developed into a phenomenon that peaks in January by bringing more than 1 million people to the town of Quartzsite, where a huge RV show greets them.

The 2022 Quartzsite Sports, Vacation, and RV Show (called “The Big Tent”) will run from January 22-30. In 39 years, the event has evolved into the largest consumer RV show in the US. The show is heaven on earth for RVers. It’s a ton of fun with hundreds of exhibits, live shows, bargain products, and fellow RV enthusiasts. The fact that the desert is gorgeous and the temperature is in the low-to-mid 70s in mid-January doesn’t hurt either!

The show is heaven on earth for RVers. It’s a ton of fun with hundreds of exhibits, live shows, bargain products, and fellow RV enthusiasts. The fact that the desert is gorgeous and the temperature is in the low-to-mid 70s in mid-January doesn’t hurt either!

Quartzsite is a popular destination for snowbirds on its own but many come for a week or two during the RV Show. When the gates open on the first day, people are lined up for a quarter-mile at each of the two main entrances to get in. It fills the tent and creates gridlock.

If you’re an RVer, Quartzsite in January is on your bucket list.

Quartzsite is a phenomenon, a gathering place.