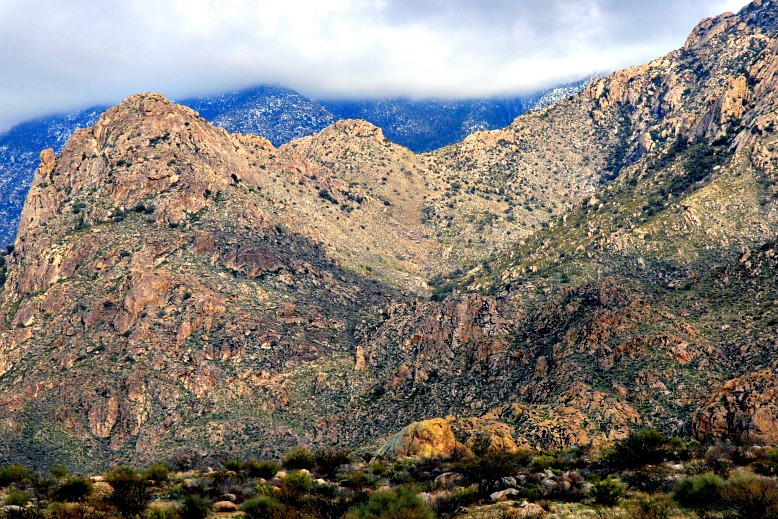 Southern Arizona is not only about saguaro cacti and desert sunsets. Somewhat unexpectedly, the arid region also features several lakes and wetland areas teeming with fish and migratory birds. Add in majestic mountain ranges and fascinating historic sites and you have the makings of a wonderful southern Arizona state parks road trip.

In all, Arizona has 31 state park units. While much of the attention centers on high-profile parks including Red Rock and Slide Rock near Sedona and the Phoenix-area Lost Dutchman, the parks near the southern Arizona community of Tucson along with those in the southwestern corner of the state shine brightly as well. A number of southern park beauties seemed to be fairly unknown to the rest of the state.

Beaches in Arizona are admittedly few and far between and for a sandy swimming beach less than a half-hour drive northeast of the Arizona/Mexico border town of Nogales locals flock to Patagonia Lake State Park. Considered a hidden treasure of southeastern Arizona, Patagonia Lake is a manmade body of water created by the damming of Sonoita Creek. The 265-acre lake cuts a vivid blue swath through the region’s brown and amber hills.

Along with swimming which is popular throughout the warm-weather months, Patagonia Lake offers boating, fishing, waterskiing, a picnic area with ramadas, tables, and grills, a creek trail, boat ramps, a marina, and bird-watching. Its unique arched bridge that rises over a lake channel is a great place to spot birds in the reeds along the shoreline or just enjoy the warm breeze. Hikers can also stroll along the creek trail and see birds such as the canyon towhee, Inca dove, vermilion flycatcher, black vulture, and several species of hummingbirds.

For a unique place to stay in the area, the park features a campground and seven camping cabins with beautiful views of the lake. The 105 developed campsites offer a picnic table, a fire ring/grill, and parking for two vehicles. Select sites also have a ramada. Sites have 20/30 amp and 50 amp voltage. Campsite lengths vary but most can accommodate any size RV.

Located downstream from Patagonia Lake along the lower Sonoita Creek, the Sonoita Creek State Natural Area is its own entity within the Arizona State Parks system and has an identity of its own as a world-class birding area. The lower Sonoita Creek, a perennial tributary of the Santa Cruz River has a well-developed riparian forest that fosters a great diversity of birds and other wildlife. The Sonoita Creek State Natural Area consists of thousands of acres and includes a trail easement that connects it to Patagonia Lake State Park.

Twenty miles of trails are available for hiking and eight miles of trails are shared with equestrians.  A 1.5-mile hike of moderate difficulty called the “Overlook Trail” is close to Patagonia Lake State Park and is a great way to see 360 degrees of spectacular scenery. Most of the trails are more remote and the shortest round trip hike to the creek is three miles on the Sonoita Creek Trail. At all times of the year, boots with good traction, sun protection, food, and water are recommended. The minimum elevation change on any route is 300 feet.

The Sonoita Creek State Natural Area has been designated an Important Bird Area by the National Audubon Society. During the spring migration from late January through early April, a guided bird walk could yield sightings of more than 60 species and the complete bird list consists of more than 300 species. One of the most sought-after birds is the elegant trogon which might be seen between November and March. Ducks, rails, raptors, and flycatchers are commonly sighted. Other animals in the area include creek squirrels, coatis, raccoons, skunks, deer, snakes, javelina, jackrabbits, and an occasional bobcat or mountain lion.

The Sonoita Creek State Natural Area’s visitor center is located within Patagonia Lake State Park and entry fees for the lake include the use of the natural area.

With the Santa Catalina Mountains beckoning in the distance and canyons and seasonal streams dotting the landscape, Catalina State Park provides a delightful respite in the Tucson area. The park is a haven for desert plants and wildlife and nearly 5,000 saguaros. The park’s 5,500 acres provide miles of equestrian, birding, hiking, and biking trails that wind through the park and into the nearby Coronado National Forest. More than 150 species of birds call the park home. This scenic desert park also offers equestrian trails and an equestrian center provides a staging area for trail riders with plenty of trailer parking.

Located within minutes of the Tucson metro area, Catalina State Park makes a convenient place to camp while exploring the city and its iconic national park, Saguaro National Park. The state park offers 120 campsites with electric and water utilities suitable for RVs of all lengths. The campground is located in the shadow of the Santa Catalina Mountains and offers birding opportunities and spectacular dusk and dawn views.

Related: The Most (and least) Popular Arizona State Parks

From military conquests to ranching endeavors to mining claims, the Tubac Presidio State Historic Park runs the gamut of early Arizona history. The story of New Spain’s presidios (forts) is a unique one and Tubac’s primary purpose is to preserve the ruins of the oldest Spanish presidio in Arizona—San Ignacio de Tubac established in 1752. Tubac is one of few such sites that remain and its historic significance is heightened by the rarity of presidio sites.

Today, a walk through the Tubac Presidio State Historic Park includes not just the history of the New Spain fort but also of the people who came afterward to live and work in the region. Along with the ruins of the fort the park preserves the 1885 Territorial Schoolhouse, the second oldest schoolhouse in Arizona.

The Tubac Presidio Museum houses interpretive exhibits with many original artifacts and the original Washington Printing Press that printed Arizona’s first newspaper in 1859. The Visitor Center contains Spanish/Mexican-influenced furnishings and an artist mural of the Presidio, a model of the Presidio, historic maps, and a seven-minute video presentation that gives a brief history of the village of Tuba.

A variety of birds can be spotted on the grounds, including roadrunners. Although large mammal sightings at the park during park hours are rare, the Anza Trail passes through the park, and visitors can catch glimpses of javelinas, deer, and coyotes.

The Tubac Presidio State Historic Park is just one aspect of the artsy community of Tubac. The village of about 1,500 people has over 100 galleries, studios, and shops, all within easy walking distance of each other. You’ll find an eclectic and high-quality selection of art and artisan works that include paintings, sculpture, pottery, metalwork, hand-painted tiles, photography, jewelry, weaving, and hand-carved wooden furniture.

If you are interested in exploring more of the area around Tubac, Tumacácori National Historic Park preserves the ruins of three Spanish mission communities and is less than five miles from Tubac. These abandoned ruins include San José de Tumacácori, Los Santos Ángeles de Guevavi, and San Cayetano de Calabazas.

Park Entrance Fee: $7 per vehicle; no overnight parking is permitted

For most, the name Tombstone conjures up images of the Wild West and the gunfights that occurred there. Certainly, Tombstone is known as the site of a bloody gunfight that occurred at the O.K. Corral Livery & Feed in 1881 that killed three and wounded three others. The legend of the shootout has lasted through the centuries and spawned numerous Hollywood movies.

But a deeper understanding of the town and the region is available at the Tombstone Courthouse State Historic Park. The two-story courthouse designed in the Victorian style was constructed of red brick in 1882. The courthouse, a splendid example of territorial architecture, continued to serve as a county facility until 1931 when the county seat was moved to Bisbee.

Today, the old courthouse houses information on the gunfight at the O.K. Corral along with artifacts from Tombstone’s mining past including a saloon and gaming room, a period sheriff’s office, and a period lawyer’s office and courtroom. Outside in the courtyard is a reproduction gallows—the site where many convicted murderers met their fate.

The Schieffelin Monument is the last resting place of Ed Schieffelin, the prospector who discovered the mineral deposits that triggered the Tombstone silver boom in 1877. Located in the beautiful high desert 3 miles northwest of Tombstone, the Monument is now part of the Tombstone Courthouse State Park. It is a place where you can feel a direct connection to the Old West days of Tombstone, “the town too tough to die.”

Park Entrance Fee: $7 per vehicle; no overnight parking is permitted

Located in the far southwestern corner of the state, the Colorado River State Historic Park (formerly Yuma Crossing State Historic Park) sits on the bank of the Colorado where river captains once sailed from the Gulf of California to unload supplies then kick up their heels in the bustling port of Yuma. Ocean vessels brought supplies around the Baja Peninsula from California to Port Isabel, near the mouth of the Colorado. From there, the cargo was loaded onto smaller steamships and brought upstream to Yuma. The purpose of the depot was to store six months’ worth of supplies for the forts in the area. The depot operated from 1864 until 1883 when the arrival of the railroad made the long steamship route unnecessary.

Many of the original structures from that time are still standing. Made of adobe, essentially mud and plant material, they have survived well in Yuma’s dry climate. In fact, since their original construction, the buildings have been used by the Weather Service, the Bureau of Reclamation, the Signal Corps, the Border Survey, and the Yuma County Water Users Association as recently as the late 1980s.

Today, Colorado River State Historic Park preserves the history of the facility while providing additional information about Yuma as a Colorado River community and the engineering behind one of its impressive canal systems. The park’s visitor center features an exhibit on the military history of the Yuma Quartermaster Depot and includes a model depicting the depot’s appearance in 1872. The park is closed Monday and Tuesday.

Park Entrance Fee: $6 per vehicle; no overnight parking is permitted

Sitting on a bluff overlooking the Colorado River, 3 miles west of the confluence of the Colorado and the historic Gila River, stand the ruins of Arizona’s famous Territorial Prison.

Today, Yuma Territorial Prison State Historic Park is open, welcoming convicts of another kind —those guilty of having a curiosity for what it was like to work and live inside the prison walls. The cells, main gate, and guard tower are still standing providing visitors with a glimpse of convict life in the Southwest over a century ago. Turn yourself in for a fascinating experience, which includes a look into “The Dark Cell” and a look back at the men AND women who served hard times in Yuma.

And, you don’t have to wait until 3:10; the park is open from 9 am -5 pm so stop in and take a walk through a big slice of the history of the Old West. The park is closed Tuesday and Wednesday.

Park Entrance Fee: $8 per vehicle; no overnight parking is permitted

To my mind, these live oak-dotted hills fat with side oats grama, these pine-clad mesas spangled with flowers, these lazy trout streams burbling along under great sycamores and cottonwoods, come near to being the cream of creation.