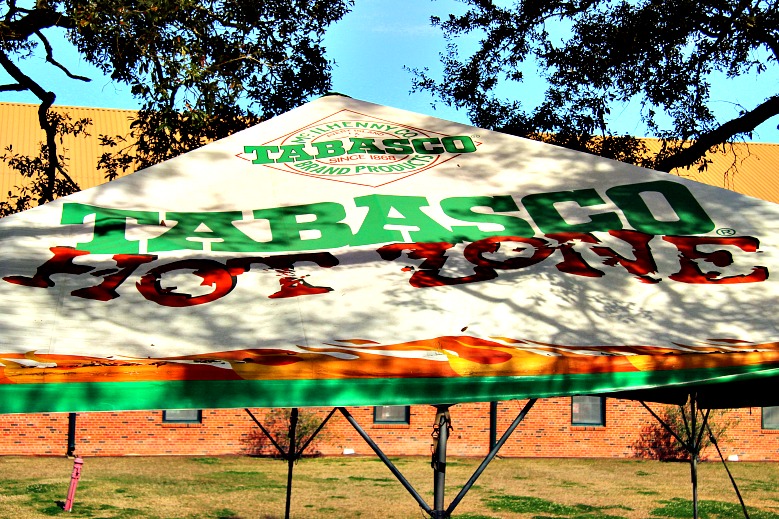 Avery Island, the birthplace of Tabasco Brand Products including TABASCO pepper sauce, has been owned for over 180 years by the interrelated Marsh, Avery, and McIlhenny families. Lush subtropical flora and live oaks draped with Spanish moss cover this geological oddity which is one of five islands rising above south Louisiana’s flat coastal marshes.

The 2,200-acre tract sits atop a deposit of solid rock salt thought to be deeper than Mount Everest is high. Geologists believe this deposit is the remnant of a buried ancient seabed, pushed to the surface by the sheer weight of surrounding alluvial sediments. Although covered with a layer of fertile soil, salt springs may have attracted prehistoric settlers to the island as early as 12,000 years ago. Fossils suggest that early inhabitants shared the land with mastodons and mammoths, giant sloths, saber-toothed tigers, and three-toed horses.

A salt production industry dates back to about 1000 AD, judging from recovered basket fragments, polished stone implements, and shards of pottery left by American Indians. Although these early dwellers remained on the Island at least as late as the 1600s, they had mysteriously disappeared by the time white settlers first discovered the briny springs at the end of the next century.

After the Civil War, former New Orleans banker E. McIlhenny met a traveler recently arrived from Mexico who gave McIlhenny a handful of pepper pods, advising him to season his meals with them. McIlhenny saved some of the pods and planted them in his in-laws’ garden on Avery Island; he delighted in the peppers’ piquant flavor which added excitement to the monotonous food of the Reconstruction-era South.

Around 1866 McIlhenny experimented with making a hot sauce from these peppers, hitting upon a formula that called for crushing the reddest, ripest peppers, stirring in Avery Island salt, and aging the concoction he then added French white wine vinegar, hand-stirring it regularly to blend the flavors. After straining, he transferred the sauce to small cologne-type bottles, which he corked and sealed in green wax.

“That Famous Sauce Mr. McIlhenny Makes” proved so popular with family and friends that McIlhenny decided to market it, growing his first commercial crop in 1868. The next year he sent out 658 bottles of sauce at one dollar per bottle wholesale to grocers around the Gulf Coast, particularly in New Orleans. The public responded positively and soon McIlhenny had introduced Tabasco sauce to consumers in major markets across the United States. By the end of the 1870s, McIlhenny was exporting Tabasco sauce to Europe. So began the fiery condiment that is now a global cultural and culinary icon.

Today, Avery Island remains the home of the Tabasco Factory, as well as Jungle Gardens and its Bird City waterfowl refuge. The Tabasco factory and the gardens are open to the public.

Experience the history and production of the world-famous hot sauce during your visit to Avery Island. The Avery Island Fan Experience includes a self-guided tour of the TABASCO Museum, Pepper Greenhouse, Barrel Warehouse, Avery Island Conservation, Salt Mine diorama, TABASCO Country Store, TABASCO Restaurant 1868! and the 170-acre natural beauty of Jungle Gardens. Admission is $12.50 with a 10 percent seniors and veterans discount.

E.A. McIlhenny created a 170-acre garden, in 1935 he opened it to the public to enjoy his collection of camellias, azaleas, and other imported plants. You may see wildlife such as alligators, bears, bobcats, deer, and other wildlife as you walk or drive along man-made lagoons that trail Bayou Petit Anse. The over 900-year-old Buddha sits in the Temple he created. And visit “Bird City”, home to thousands of egrets, herons, and other birds!

US 90 Exit 128A on LA 14 toward New Iberia approximately three-quarter-mile then right on LA 329, 7 miles to Avery Island

Read Next: Cool-As-Hell Louisiana Towns You Need to Visit (Besides New Orleans)