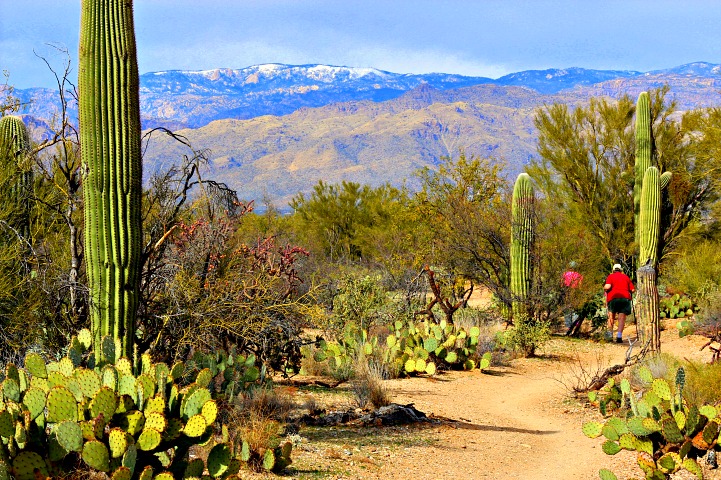 The giant saguaro is the universal symbol of the American Southwest. These majestic plants found only in a small portion of the United States are protected by Saguaro National Park. Here you have a chance to see these enormous cacti silhouetted by the beauty of a magnificent desert sunset.

America’s largest cactus, the saguaro’s imposing stature, and uplifted arms give it a regal presence. Perhaps that’s why this burly giant whose only bits of exuberance are seasonal blossoms and fig-like fruits at the tip of its limbs has been dubbed the “desert monarch.”

While you can enter the Tucson Mountain District on other roads, it’s best to go in from Speedway Boulevard over the dramatic Gates’ Pass which is part of the Tucson Mountains. Like its counterpart on the east side of town, it offers a variety of trails that range from a leisurely meander around the visitor’s center to full-day treks. The west park is near two other attractions, as well: The Arizona-Sonora Desert Museum, a regional showcase for native plants and animals, and Old Tucson, the one-time movie set where the street scenes of many old westerns were filmed.

The park’s east district is about 20 miles away on the opposite side of the city where it wraps itself around the foothills of the Rincon Mountains. It’s also about 500 feet higher in elevation, larger, and boasts both numerous hiking options and a paved 8-mile driving loop.

Start your visit at the visitor center of either one of the Saguaro National Park two districts. Here, you can view museum exhibits, informational slide shows, cactus gardens, and shop at the bookstore and gift shop. The visitor centers are also the starting point for numerous hiking trails and scenic drives. Guided walks led by visitor center staff are also available—giving you the best close-up experience with some of the most notable areas of the park.

Although Saguaro National Park is open every day of the year except Christmas, the busiest time is from November to March. During the winter months, temperatures are cooler and range from the high 50s to the mid-70s. Starting in late February and March, a variety of cactus and wildflowers begin to bloom. In late April the iconic saguaro begins to bloom. Come June the fruits are beginning to ripen. In August the lush Sonoran desert starts its monsoon season so be aware of possible flash floods.

There are many activities to partake in at Saguaro National Park no matter the season. There is a multitude of short hikes to choose from or for the adventurous hiker, wilderness hikes, and backcountry camping.

Saguaro is offering a number of ranger-guided hikes during February. Two hikes are described below. Contact the park for updates on the day of the program. If you reserve a spot but then cannot make the scheduled hike, call to cancel your reservations by 9 a.m. the day of the hike.

This hike gains 700 feet with most of the elevation change in switchbacks near the ridgeline where hikers will watch the sunset before descending under the moonlight. This hike is restricted to ages 10 and older. Reservations are required.

This walk bridges sunset into moonlight letting hikers experience the desert in both the glow of twilight and the light of the waxing moon. The hike is considered easy to moderate, with an elevation gain of roughly 200 feet. The trail begins and ends on a small stretch of dirt road, proceeding to traverse in and out of a winding dry river bed along with fields of mighty Saguaros. This hike is restricted to ages 8 and older. Reservations are required.

Saguaro supports other activities as well. Bicycling around the east district’s Cactus Forest Loop Drive is a popular road bike route as is mountain biking on the Hope Camp Trail and Cactus Forest Trail.

Saguaro National Park’s two districts offer more than 165 miles of hiking trails. A hike at Saguaro can be a stroll on a short interpretive nature trail or a day-long wilderness trek.

The best place to view the sunset on the east side is either the Tanque Verde Ridge trail (.5 mile hike) or the Javelina Rocks pull-out. The driving loop does not close until 8:00 p.m. so you have plenty of time to leave the loop after sunset.

On the west side, Gates Pass (the end of Speedway Blvd to the west) is the ideal spot for a sunset. There is a parking lot at the top of the winding road with Tucson Mountain Park but this closes just after sunset.

The saguaro cactus is the Sonoran Desert’s singular icon, the largest native living thing that exists here, and it appears to be a stunningly robust presence in a harsh land.