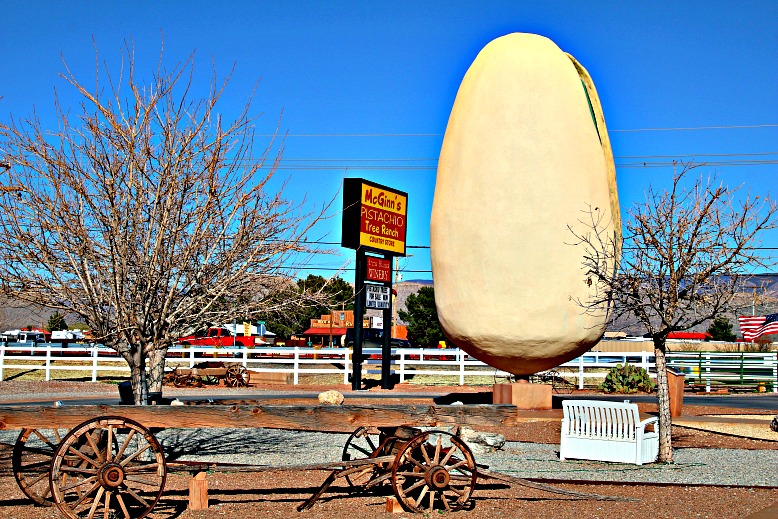 Hard to believe, but it wasn’t until 1976 that Americans harvested the first commercial crop of pistachios. They had been enjoying the nut since about the 1800s but it was not until the 1930s that the love for pistachios really took off. What may have made the little tree nut so admired, though, is the invention of pistachio ice cream in the 1940s by James W. Parkinson of Philadelphia.

February 26th recognizes all things pistachio and National Pistachio Day is the day to celebrate! Pistachio lovers rejoice as they eat their favorite nut all day long. For those who do not eat pistachios, buy some and give them to someone who does. Crack them open and eat them up or enjoy them in ice cream or your favorite pistachio dessert!

The pistachio probably originated in Central Asia where large stands of wild trees are found in areas known today as Iran, Turkey, and Afghanistan. Evidence indicates that the fruits of the tree have been eaten for over 8,000 years. The first commercial plantings in these countries were most likely started from seeds collected from the best wild trees. Legend has it that for the promise of good fortune lovers met beneath the trees to hear the pistachios crack open on moonlit nights.

Thanks to their high nutritional value and long storage life, pistachios were an indispensable form of sustenance among early explorers and traders including travelers across the ancient Silk Road that connected China with the West. In the first century A.D., Emperor Vitellius introduced Rome to the pistachio. Apicius, Rome’s Julia Child of the time, included pistachios in his classical cookbook.

The scientific name for pistachio is Pistacia vera L. It is a member of the Anacardiaceae family which contains such widely known plants as cashew, mango, sumach, and poison ivy.

Pistachio trees grow in dry climates and can reach up to 39 feet in height. In the spring, the trees develop grape-like clusters of green-colored fruits, known as drupes, which gradually harden and turn red.

Within the fruit is a green and purple seed which is the edible part of the fruit. As the fruits ripen, the shell hardens and splits open with a pop exposing the seed within. The fruits are picked, hulled, dried, and often roasted before being sold.

Because pistachios are the seed of a drupe, they are not a true botanical nut. In fact, they’re the edible seed of the pistachio tree fruit. However, in the culinary world pistachios are treated as nuts and they’re also classified as a tree nut allergen.

It is a deciduous tree requiring approximately 1,000 hours of temperature at or below 45 degrees in order to grow normally after its winter dormancy. Pistachio trees are generally suited for areas where summers are long, hot, and dry and the winters are moderately cold. A native desert tree, it does not tolerate high humidity in the growing season.

The pistachio nut is one of the most popular tree nuts in the world and is valued globally for its nutritional value, health, and sensory attributes, and economic importance.

Pistachio nuts are relatively low in sugar (approximately 10 percent) and high in protein (20 percent) and oil (50 percent) contents. The oil is 90 percent unsaturated fatty acids, 70 percent of which is oleic acid and 20 percent the more desirable linoleic acid.

A large percentage of pistachios are marketed in the shell for eating-out-of-the-hand snack food. Pistachios are a rich source of essential nutrients, fiber, and protein. Low in saturated fat and cholesterol-free, increasing numbers of people are discovering how enjoyable this delicious nut can be.

Although the pistachio was first introduced into California by the US Department of Agriculture about 1904, little interest was generated until the 1950s. Since that time pistachios have become a significant farm commodity in California.

Plantings have also been made in Arizona, New Mexico, and Texas in those areas that meet the climate criteria. The tree flourishes and bears well in well-drained soils but its root system will not tolerate prolonged wet conditions. It seems more tolerant to alkaline and saline conditions than most other commercial trees. The vigor and productive life of the tree are extremely long-lasting. In the mid-East, there are trees on record of having productivity of several hundred years.

Usual commercial plantings are approximately 120 trees per acre. The trees begin to produce nuts in the fourth or fifth year after planting with good production taking 8 to 10 years and full bearing maturity occurring after 15 to 20 years. The average yield per tree is one-half pound the fifth year increasing to 20 pounds at maturity.

Pistachios have always been on the pricier end of the nut scale costing three or four times as much as other nuts. Generally eaten roasted and salted as a dessert nut, the pistachio is often used in cooking as a garnish or decoration in sweet and savory dishes.

Related: Wake Up In New Mexico

Pistachios ripen in late summer or early fall growing so energetically that the kernel splits the shell. These trees are wind-pollinated which means one male tree can produce enough pollen for 25 nut-bearing female trees. Female trees produce their first nuts at age five and can bear fruit for up to 200 years.

1. Be a “pistachi”-oholic for the day

Try and go nuts today by incorporating pistachios into every meal. These versatile nuts have a powerful flavor that can elevate a sweet or savory dish throughout your day. Start off with a stack of pistachio pancakes, ease into lunch with pistachio, pomegranate, and arugula salad, then enjoy pistachio encrusted salmon for dinner, and top it all off with some pistachio gelato.

2. Give the gift of good health

Think of ways to food swap some of your not-so-good snacks with pistachios and introduce your friends to these green goodies too. They’re healthy, delicious, and by wrestling them from their shells, they help down your food intake (Ever heard of the Pistachio Effect?). Pistachios might be the golden (green) ticket to helping you and your friends keep those new year diet resolutions.

3. Eat your heart out

These green nuts will make your heart smile too. Heart-healthy monounsaturated fat makes up the majority of the fat in pistachios, so they decrease bad cholesterol and even lower your risk of heart disease. There’s no better way to celebrate than getting your snack on, guilt-free. Grab a handful (or two) and go nuts!

What’s in a name?

That which we call pistachio is known as the “smiling nut” in Iran and the “happy nut” in China. They’re also known as the “green almond.” Where’s the green come from? Pistachios are the “colorful” nut, owing to their green and purple hue to antioxidants.

Pistachios are a good source of protein, fiber, magnesium, thiamin, and phosphorus. They’re an excellent source of vitamin B6, copper, and manganese.

Among its “kissing cousins”: pistachios are related to the mango and the spice sumac.

Perhaps the original royal nut, the Queen of Sheba loved pistachios. In fact, she demanded that the entire region’s pistachio harvest be set aside for her.

Here’s to your heart

Scientific evidence suggests that eating 1.5 ounces per day of most nuts, such as pistachios, as part of a diet low in saturated fat and cholesterol may reduce the risk of heart disease.

Read Next: Light Your Fires on National Chili Day

The pistachio: it’s just like our politics. When the two sides are divided, that’s when the nuts come out.