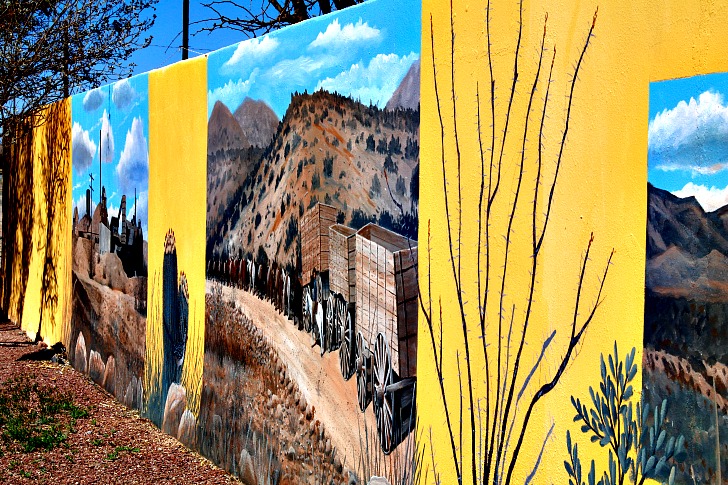 With the Grand Canyon, Oak Creek Canyon, the Painted Desert, the Four Corners area, and many other geographical wonders in the northern part of the state, southeastern Arizona, steeped in both natural history and human history, is often overlooked. But it is not to be missed!

This was the home of Cochise. This was the land of Geronimo. This was the land of copper mines, silver mines, gold mines, Army forts, Indian Wars, cowboys, cattle rustlers, gamblers, the Earp brothers and the Clantons and Doc Holiday. Southeastern Arizona was the quintessential Wild West. This place oozes with tales and legends and beauty. And it is all still here for you to enjoy.

Your Cochise adventure begins in Benson. Amid picturesque river-valley views, agreeable weather, and the Home of Kartchner Caverns State Park, the City of Benson is ideally situated along Interstate-10 as the Gateway to Cochise County. Founded in 1880 prior to Arizona’s mining boom, Benson developed as a stopping point for the Butterfield Overland Stage mail delivery route. Soon thereafter, the Southern Pacific Railroad came into Benson and continued to serve the area until 1997 when the line was purchased by Union Pacific Railroad.

The City of Benson’s culture is ingrained with the Old West and its traditional Railroad heritage. The Benson Visitor Center—Train Depot, located at 249 East Fourth Street in the heart of Benson’s historic downtown, is a beautiful replica railroad depot using many of the same architectural features as the original depot that was built over a century ago. Learn all about the city’s rich railroad heritage and the many area attractions.

Head out from the Visitor’s Center to the Mural Walking Tour, a fun look at 42 hand-painted—showcasing everything from Buffalo Soldiers to Hopi kachinas and cattle drives to the Butterfield Overland Stage.

Then you’ll head to Sierra Vista for a Bicycle Tour of the Cochise Vista Trail. Hop in the saddle—the bicycle saddle—and explore southeastern Arizona. Whether your bike has skinny tires or knobby ones or you ride astride a single-speed cruiser or a speedy racer, Sierra Vista is the place to start your bicycle adventure.

Road cyclists looking for long, winding roads with low traffic can’t beat the stretches of asphalt in and around Sierra Vista. Whatever direction you ride, you’ll find a constantly changing landscape and expansive mountain views along the way.

Mountain bikers can find miles of single-track trails in the Huachuca Mountains along multi-use paths or signed bike lanes. One of the most popular jumping-on points is along Ramsey Canyon Road at Brown Canyon Ranch. The Brown Canyon Trail gains about 1,900 feet in elevation and connects Brown Canyon Road making a nice loop ride; be sure to take the well-traveled jog to avoid the Miller Peak Wilderness Area. Popular with experienced riders, Brown Canyon gets a little gnarly with the elevation gain and rocky terrain but the reward is breathtaking views and smooth, flatter trails in open areas.

Sierra Vista, one of the top birdwatching places on earth, is nicknamed the Hummingbird Capital of the United States. Annually, 15 species of hummingbirds and more than 300 other bird species visit nearby canyons, forests, and riverbanks.

One of Bisbee’s most magnificent architectural achievements is the countless concrete stairs that cling to the steep canyon sides. You can find these stairs all over town. While you’re at it, explore the heritage and culture along Subway Street and enjoy some shopping as you take a self-guided tour.

The Bisbee Tour Company offers multiple golf cart tour options to enjoy the town from an entirely different perspective. If you’re interested in Bisbee’s eerie past, an evening walking tour with Old Bisbee Ghost Tour will show you the town and introduce you to some ghostly members of society.

Tour the Queen Mine, one of the most productive copper mines of the 20th century. Don the mining lanterns, hats, and slickers of the miners, ride the mine train deep into the mine and search for remaining veins of copper, gold, turquoise, silver, lead, and zinc.

Next, you’ll take in the ambiance of Douglas—home to the first international airport—as you enjoy the Border Air Museum and Art Car Museum. The museum includes photos, newspaper articles, original airplane photos, the official letter of President of United States Roosevelt declaring the airport “The First International Airport of the Americas,” a Trojan airplane that was built in Douglas, American Airlines memorabilia, and more.

The Gadsden Hotel opened for business in November 1907. The hotel soon became a meeting place for cattlemen, ranchers, miners, and businessmen. This grand hotel was named after the historically significant Gadsden Purchase; a purchase of 30,000 square miles from Mexico made in 1853 for 10 million dollars, negotiated by James Gadsden who was then the U.S. Ambassador to Mexico. The land purchase was to ensure territorial rights for a practical southern railroad route to the pacific coast. We can now only imagine how Arizona was before it was a state and at a time when Wyatt Earp, Geronimo, and Pancho Villa rode roughshod over the West.

Any tour of this area would not be the same or complete without including the legendary town of Tombstone. The entire town is a National Historic Landmark and much of the original buildings are still intact. There is something for every member of the family in Tombstone, the Town Too Tough To Die.

At first glance, it might appear that gift, book, and curio shops are the main attractions but if you take the time to stroll down the boardwalks, you will find yourself drawn into the past. Besides the OK Corral and the reenactments that take place in the outdoor amphitheater, there are both public and private museums, antique stores, the original Tombstone Epitaph newspaper print shop, and Boot Hill.

Visitors can pan for gold, horseback ride down trails once traveled by Doc and Wyatt, take a stagecoach ride, tour the silver mines, stay at historic bed and breakfasts or an RV park, and attend the infamous Bird Cage Theater where Tombstone’s haunting and colorful past will take you back to its heyday.

To truly appreciate all that Tombstone has to offer, park the car or RV and plan to spend at least a day taking a walk back into history.

Read Next: 5 Surprising Facts about Arizona you didn’t know (But Now You Do)

To my mind, these live oak-dotted hills fat with side oats grama, these pine-clad mesas spangled with flowers, these lazy trout streams burbling along under great sycamores and cottonwoods, come near to being the cream of creation.