Second only to the Mississippi River Delta in size, the Mobile-Tensaw Delta is an environmental showplace that is 45 miles long and over eight miles wide 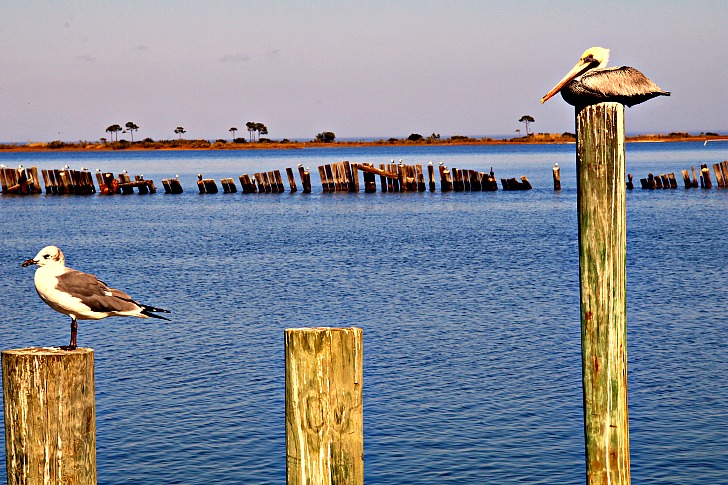 “It is arguably the biologically richest place,” scientist E.O. Wilson said, describing the importance of the Mobile-Tensaw Delta on a global scale. “The delta floodplain forest and swamp, and the area immediately around it including the Red Hills to the north has more species of plants and animals than any comparable area anywhere in North America … it is a place yet completely unexplored, sort of like the upper Amazon.”

The Delta proper is a vast jungle wilderness where dozens of river channels braid together and twist apart creating hundreds of islands large and small. Those islands and channels are populated with numerous creatures capable of killing a grown man: bears, alligators, bull sharks, bobcats, feral hogs, and five species of venomous snakes.

There are 300 bird species and an untold variety of insects, amphibians, and reptiles. But more than anything, the Delta is the place where all the water running downhill from the rest of the state meets the sea.

The Mobile-Tensaw River Delta is Alabama’s largest wetland ecosystem and the nation’s second-largest river delta. It is approximately 45 miles long, averages eight miles wide, and contains over 400 square miles of wetland and associated upland ecosystems. The Delta is characterized by a large number of tributary rivers, streams, bayous, and creeks which form a maze of waterways including the waters of the Tensaw, Mobile, Tombigbee, and Alabama rivers.

A 1,327-acre state park is situated in these wetlands and is a day-use, picnicking, and scenic park with modern camping hook-ups for overnight visitors. Meaher’s boat ramp and fishing pier will appeal to every fisherman. A self-guided walk on the boardwalk will give visitors an up-close view of the beautiful Mobile-Tensaw Delta.

Meaher State Park is the perfect access point to this massive natural wonder. Since the Delta empties into Mobile Bay, it is a productive estuary with numerous species of fresh and saltwater fish which makes Meaher State Park an angler’s dream. And, you might also see an alligator or two.

The park offers a 300-foot pier with a 200-foot “T” for your fishing pleasure. Access to the pier is included in the park admission fee. An Alabama freshwater fishing license is required. The most common freshwater and saltwater fish are abundant in the area.

There is also a boat ramp with access to Blakeley River located on the east end of the park. Entry is $4 per boat. The ramp is accessible from 7 a.m. until sundown.

You may also choose to walk the park with your camera, binoculars, or even your favorite pet. There is a second boardwalk for walking only where you might see some of the delta’s most unique flora and fauna.

Meaher’s campground has 61 RV campsites. Each site is paved, roughly 65 feet in length with 20-, 30- and 50-amp electrical connections as well as water and sewer hook-ups. You have a grill and picnic table at your site and plenty of space between you and the next camper.

There are 10 improved tent sites with water and 20-amp electrical connections. All of the tent sites have a grill/fire pit and picnic table available. Primitive camping is also offered (group and individual).

Meaher State Park is stop #26 on the Coastal Alabama Birding trail guide. This trail will take you on over 200 miles that loop around Mobile and Baldwin counties.

There is a $2 per person park entry fee to enter Meaher State Park for day use only. You might choose to go fishing, hiking, picture taking, birding, etc. If you choose to go boating there is a $4 per boat entry fee. Camping fees vary.

The Mobile-Tensaw Delta Wildlife Management Area is comprised of a variety of habitats-from flooded hardwood bottoms to freshwater marshes. The area has a variety of habitats for birders to explore.  Located along the east bank of the Tensaw River is an 850- acre parcel comprised of flooded hardwood bottoms along the river to upland hardwoods and pines. Additionally, there is a lake and peripheral freshwater marsh. During the breeding season, common species include a red-shouldered hawk, barred owl, red-eyed vireo, prothonotary warbler, and northern parula. In the summer months, swallow-tailed kites may be spotted flying along the river banks just above the tree line.

5 Rivers Delta Resource Center’s name recognizes the five rivers of the Mobile-Tensaw Delta, which include the Mobile, Spanish, Tensaw, Apalachee, and Blakeley Rivers (from west to east) that flow into Mobile Bay. The Center itself sits on the banks of one of the canals of this vast delta. These drainages encompass over 250,000 acres of meandering waterways, floodplain forests, and extensive wetlands. The center features an exhibit hall, theater, gift shop, Delta boat tours, canoe and kayak rentals, hiking trails, and picnic areas.

It’s the ultimate place to begin your adventure into over 250,000 acres of scenic waterways, woods, and wetlands. Or, simply soak up the natural beauty and history of the region with plenty to do and see at the facility itself.

The decks of the Delta Hall and the perimeter trail around the facility provide excellent vantage points to observe birds that are representative of the lower Mobile- Tensaw Delta marsh and waterways. In spring and summer, look for brown pelican, osprey, king rail, marsh wren, and several species of herons and egrets. Occasionally, the least bittern and purple gallinule may be encountered along the margins of the emergent marsh. Painted bunting may also be possible in the thickets near the buildings. In fall, you may see rafts of American white pelicans foraging. In winter, the vegetation along the water’s edge is good habitat for gray catbirds and a variety of sparrows. Across from the Delta Hall are hiking trails that meander through a grove of live oaks.

The Delta was also the site of the initial settlement of the town of Mobile, established in 1702 by a French expedition led by Pierre Le Moyne d’Iberville

In the end, we only conserve what we love.

We only love what we understand.

We will understand what we are taught.