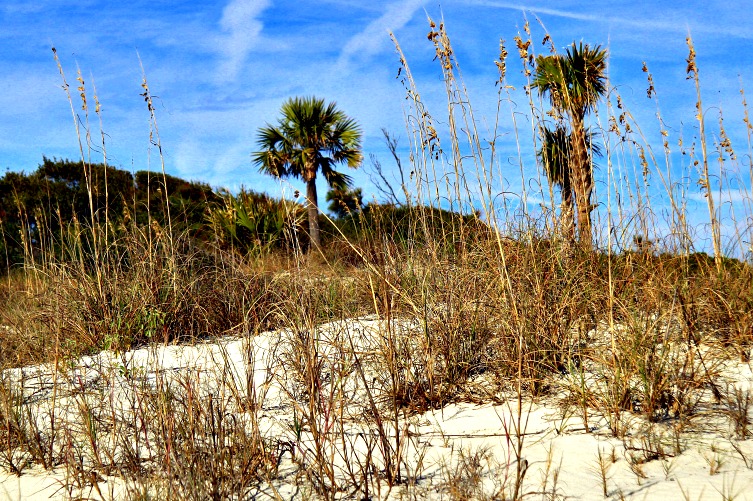 Georgia‘s Atlantic Coastline is only about 100 miles long but along this green corridor, you’ll see some of America’s most breathtaking natural landscapes.

This is a region woven with many cultures, notably the coastal Gullah with origins in West Africa. Their traditions include sweetgrass baskets, quilting, and knitting fishing nets.

Folklore, stories, and songs have also been handed down over the years.

Nestled on the Georgia coast, midway between Savannah (Georgia) and Jacksonville (Florida) lies the mainland city of Brunswick and a series of barrier islands.

St. Simons and Jekyll islands straddle the Marshes of Glynn, made familiar by Sidney Lanier’s poem of the same name.

The 5.9-mile causeway that leads to Jekyll is flanked by tidal marshes, home to waterfowl and migrating birds.

Related: Spotlight on Georgia: Most Beautiful Places to Visit

Four of the beautiful isles—St. Simons, Little St. Simons, Jekyll, and Sea—and a nearby coastal town are known collectively as Brunswick and the Golden Isles of Georgia.

These coastal isles have long served as refuges for wildlife, havens for millionaires, and bastions of history.

Voodoo, alligators, wild horses, African culture, and the wealthiest families in the United States are all part of the history of the Golden Isles.

The state has only 100 miles of coastline, but nearly 800 miles of shoreline. Seventeen barrier islands are in this complex.

Spanish explorers seeking gold originally descended upon the territory more than 400 years ago, only to find astonishing beauty, mild weather, and a natural radiance that inspired the area’s name, the Golden Isles.

Pristine stretches of marshland, punctuated by small islands known as hammocks, define the breathtaking landscape and create the appearance of a continuous stretch of land reaching out to the barrier islands. These vast marshes turn a beautiful golden color in the fall, especially dramatic when lit by the setting sun.

The Golden Isles are also heralded as a destination where the gentleman’s game of golf meets Southern hospitality in a seaside setting with a rich and storied history. The area’s beauty and world-class golf courses, facilities, and instructors have earned the Golden Isles its reputation as a golfer’s paradise.

Jekyll Island alone boasts four public courses situated along and through a state park—the 18-hole Pine Lakes, Oleander, and Indian Mound courses and 9-hole Great Dunes. Joining the Seaside Course at Sea Island are two other full-length tracks, the Plantation and the Retreat, while Heritage Oaks in Brunswick is known for its conditioning.

Not only do the Golden Isles provide a rich golf experience but they also come alive as nature’s playground with acres of undeveloped land, marshes, and rivers along with the vast expanse of ocean.

The largest of The Golden Isles, St. Simons Island continues to reveal the beauty and fascinating history of what 16th-century Spanish explorers called San Simeon.

Visitors come year round to swim, stroll, and sail along its miles of lovely beaches, to challenge its 99 holes of superb golf and numerous tennis courts, and to explore its countless shops and restaurants.

The island’s villages offer a charming and unique selection of shops, plus a variety of restaurants. Visitors and residents alike enjoy outdoor recreation at Neptune Park and its Fun Zone which includes a public pool, miniature golf, and a fishing pier.

As I discovered during our visit, St. Simons Island is dotted with historic sites and attractions, from the St. Simons Lighthouse Museum—a working lighthouse built in 1872—to the Bloody Marsh Battle Site, where, in July 1742, British and Scottish soldiers protecting colonial Georgia defeated a larger Spanish force in a battle that helped end Spanish incursions north of Florida.

Fort Frederica National Monument which preserves archaeological remnants of the local British colony and its defense against Spain and historic Christ Church, Frederica—one of the oldest churches in Georgia with worship held continuously since 1736—are located on the island’s north end.  Fort Frederica, Georgia’s first military outpost was established by British General James Oglethorpe. A visitor’s center and museum are also located on the site.

Live oaks, the same trees that overshadow Frederica Road, were milled for use in Revolutionary warships including Old Ironsides, also known as the USS Constitution. Because the trunks and branches of this tree naturally bend, they were perfect for forming the hulls of boats.

Toward the southern tip, the Maritime Center, in the restored U.S. Coast Guard Station provides fascinating glimpses of the area’s natural evolution while highlighting some of its maritime and military history.

Year round warm weather in the Golden Isles allows visitors to enjoy a variety of outdoor activities such as kayaking, fishing, biking, golfing, or relaxing on East Beach.

Visitors can tour the island’s historic sites on a variety of transportation options.

Though much of Sea Island is residential, Island life centers round The Cloister, perennially honored as one of the world’s great hotels. Golf club, beach club, gun club, horseback riding, fine dining, and numerous other activities are among the amenities enjoyed by its guests.

Guests of Sea Island who enjoy the game of golf can appreciate the Golf Learning Center and three championship golf courses at Sea Island Golf Club.

The Seaside Course, home to the PGA TOUR’s McGladrey Classic, is a links course graced by majestic ocean vistas in the tradition of St. Andrews.

The Plantation Course winds enticingly through marsh and forest while the Retreat Course offers a uniquely dramatic and challenging design cultivated by Davis Love III and Mark Love.