In its glory years, Route 66 proved an escape for drivers seeking freedom and adventure on the open road. It provides the same today for those willing to get off the interstates to traverse what’s left of it. 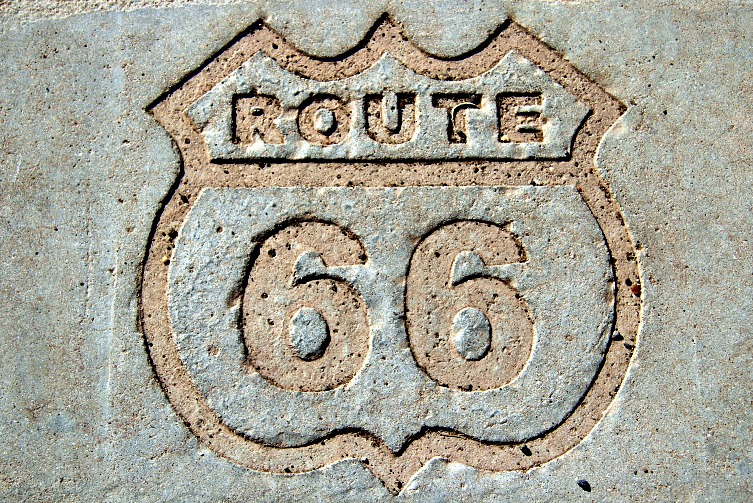 Michael Wallis, author of the 1990 book Route 66: The Mother Road, describes what became known as “The Main Street of American”:

“A thread looping together a giant patchwork of Americana, this fabled road represents much more than just another American highway. Route 66 means motion and excitement. It’s the mythology of the open road. Migrants traveled its length; so did desperadoes and vacationers. Few highways provoke such an overwhelming response. When people think of Route 66, they picture a road to adventure.”

Northwestern Arizona is home to the longest uninterrupted portion of the historic highway, the 159-mile span from Seligman to Kingman. A great starting point for those wishing to explore this stretch is the Arizona Route 66 Museum and Visitor Center in Kingman where travelers can add context to their journey into a storied past.

Formally established in 1926, Route 66 was “a 2,448-mile journey to the heart of America,” the Historic Route 66 Association of Arizona pamphlet reads. “Contrasted with the other highways of its day, Route 66 did not follow a traditionally linear course. Its diagonal path linked hundreds of communities across eight states and became the principal east-west artery.”

At first, much of Route 66 was dirt. It was not paved in its entirety until 1938. It was on this dirt road that one significant group of people traveled from the Midwest seeking a better life. The combination of economic depression, ill-advised farming practices, and severe drought led to the “Dust Bowl” in the 1930s when extreme storms literally carried the topsoil of farmland hundreds of miles away.

“Dust clouds several miles high blew across the plains covering everything with fine, dry silt,” a museum interpretive plaque states. “Crops would not grow and animals and humans were actually driven mad by the wind and the dust.”

These harsh conditions inspired farmers who became known as “Okies” because they were centered along the panhandle of Oklahoma to travel west to find their greener pastures. Their principal route became known as the “Mother Road” because of John Steinbeck’s description of it as such in his novel, The Grapes of Wrath, which chronicled the travails of a fictional Dust Bowl family.

In Chapter 12 of Steinbeck’s masterpiece, he wrote: “66 is the path of people in flight . . . they come into 66 from the tributary side roads, from wagon tracks, and the rutted country roads. 66 is the mother road.”

Interestingly, according to the museum’s interpretation materials, more than 200,000 people fled west to California during the era but less than 16,000 actually stayed there. “Prosperity was supposed to be just around the corner but some made the long trek to California in dilapidated ‘tin lizzies’ only to turn back after finding more poverty and despair,” one museum plaque reads.

Related Article: Get Your Kicks (And Burros) On Route 66

The completion of paving the route on the eve of World War II became significant to the war effort. Improved highways were key to rapid mobilization during the conflict. The military chose numerous locations in the West as training bases because of their geographic isolation and good weather. Many were located on or near Route 66 including the Kingman Army Airfield Gunnery School. It was not uncommon to see mile-long convoys of trucks along the road transporting troops and equipment.

It is from the post-war years that most of the nostalgia for Route 66 stems. This was the era when the motor-going public decided to go out and explore the country in droves spawning a dramatic increase in roadside commerce. The development of gas stations, motels, and diners mushroomed in the 1950s and 60s and with them creative landmarks to draw tourists in, from twin arrows in the middle of the stretch between Flagstaff and Winslow to motel rooms that resembled Indian teepees at the Wigwam Motel in Holbrook.

Driving Route 66 was literally an adventure and Los Angeles resident Jack D. Rittenhouse wrote the adventure guide in 1946, titled A Guide Book to Highway 66. It became a bible to travelers of the open road. In it, Rittenhouse provided some important advice, including:

Be sure to have your auto jack. A short piece of wide, flat board on which to rest the jack in sandy soil is a sweat preventer . . . Carry a container of drinking water which becomes a vital necessity as you enter the deserts . . . An auto altimeter and auto compass add to the fun of driving, although they are not essential.

Related Article: King of the Road: America the Road Trip Capital of the World

The same year Rittenhouse’s guide hit shelves, Americans also heard Bobby Troup’s ode to the highway song, Get Your Kicks on Route 66, which has been covered by numerous musical groups since.

According to Tom Snyder, founder of the California Route 66 Association, Route 66 was for travelers, not tourists. To Snyder, tourists are all about rushing to the next popular place and finding the right souvenirs, but travelers are not in a hurry, want to explore, and want to find the souvenir makers, not just the souvenirs.

In 1956, however, just as Route 66 was experiencing its heyday, the administration of President Dwight D. Eisenhower enacted the Federal Highway Act of 1956 which would authorize the construction of a 41,000-mile network of interstate highways across the country and eventually signal the death knell of the “Mother Road” which it replaced with five interstates. Throughout the late 1970s and early 1980s, formerly vibrant towns in Arizona such as Seligman, Peach Springs, and Hackberry were bypassed by Interstate 40 and in a way taken off the map and out of the motoring public’s consciousness.

One of the museum’s plaques explained the end result in less than glowing terms:

Rest stops were no longer dictated by the unique and enticing attractions along the road but by large signs that said so. Today, food, gas, and lodging facilities are nearly identical from state to state and the blandness of driving an unremarkable stretch of highway takes its toll.

Like many towns along Route 66, Seligman in Arizona depended on the traffic along the highway to sustain its businesses. In 1978, when Interstate 40 replaced Route 66 and rerouted traffic two miles south of town and away from its downtown, businesses suffered, some closed and buildings were abandoned.

The old Powerhouse building became a visitor center in 1997 and the association started the museum on the second floor of the building in 2001, fittingly using money earned from the raffle of a 1964 Corvette Stingray donated to the organization. At first, the association operated the museum but then the Mohave County Historical Society which also runs the Mohave Museum and Bonelli House took it over.

The museum features exhibits portraying three epochs of history along the route: the pioneer era, the Dust Bowl era and, of course, Route 66’s golden age as America’s Main Street with vehicles of each time period as each display’s centerpiece. The museum gives younger visitors the chance to complete a scavenger hunt, looking for specific items on a list within the exhibits, and if they find all the items, museum staff rewards them with a souvenir coin.

In addition to the Arizona Route 66 Museum, the Powerhouse Building is home to a visitor center and gift shop as well as an electric car museum. Admission to the museum also allows visitors to visit the Mojave Museum of History and Arts just a block away and the Bonelli House, the restored home of a Kingman pioneer.

Well, if you ever plan to motor west
Jack, take my way, it’s the highway, that’s the best
Get your kicks on Route 66

Well, it winds from Chicago to L.A.
More than two-thousand miles all the way
Get your kicks on Route 66.