Utah features some of the most astonishing landscapes in the world 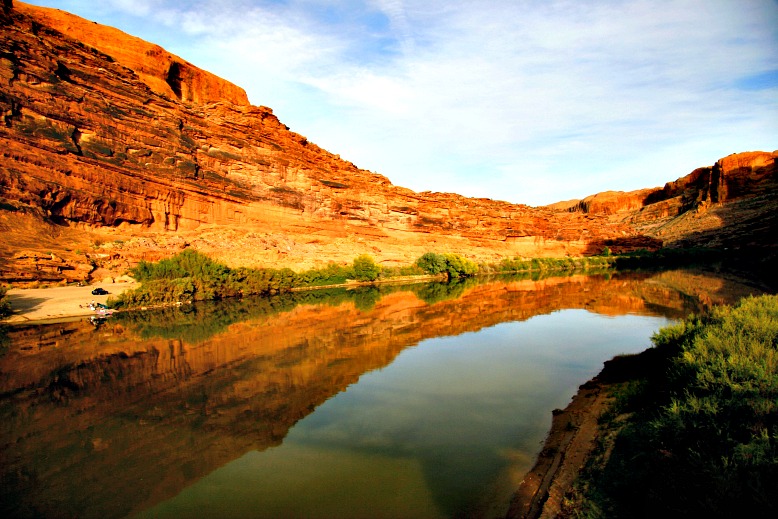 With soaring sandstone arches, serpentine slot canyons, slickrock domes, and hoodoos of all shapes and sizes, Utah boasts some of the most otherworldly panoramas on planet Earth.

Public lands cover two-thirds of the state offering vast opportunities to hike, bike, raft, ski, climb and camp—or simply gape at epic views. If the outdoors is your thing, Utah is your place. Here are the best places to go for a uniquely Utah experience.

Base yourself in Moab for outdoor adventures

On the doorstep of two national parks, a national forest with summits over 12,000 feet, and endless acres of slickrock-clad Bureau of Land Management (BLM) lands, Moab is ground zero for outdoor action in Utah. A variety of restaurants, shops, hotels, and outfitters line the streets downtown.

Just to the north, Arches National Park is graced with some of the most spectacular examples of what wind, water, freezing, and thawing can do to rock over time. If there is one must-see destination in Utah, this might be it, though in peak season the crowds can be the stuff of nightmares.

Nearby Canyonlands National Park (Utah’s largest) sees far fewer visitors while offering countless spots to view a Martian-like landscape from the rims or the bottoms of huge canyons or among formations such as The Needles, Chocolate Drops, or Land of Standing Rocks. The Green and the Colorado Rivers meet in the heart of the park.

Moab also offers easy access to some of the best mountain biking anywhere as well as prime desert rock climbing and river rafting.

Canyons of the Escalante is a great hiking region

Prepare to get wet and dirty hiking this sinuous canyon system that’s hewn into a massive field of petrified sand dunes. Spanning some 1,500 square miles including sections of Grand-Staircase Escalante National Monument and Glen Canyon National Recreation Area, the Escalante is wild, rugged country. Though you’ll probably end up wading through pools and creeks, struggling among tamarisk groves, and scrambling over rocks, it’s more than worth it.

The sublime beauty of the sensuous red- and orange-hued walls streaked with desert varnish inspires a sense of gratitude for life itself. Each side canyon has its own character—some feel private and intimate while others are impressively grand. Aim for highlights such as the Golden Cathedral and Stevens Arch or pick a route where you’re less likely to run into other people. Either way, you’ll be glad to be wherever you are.

Covering 1.36 million acres of land sacred to the region’s Native American tribes, Bears Ears National Monument features some of the most remarkable Ancestral Puebloan sites in Utah. Regardless of how much time (and energy) you have, there’s something here for everyone.

You can practically drive right up to the petroglyphs that crowd onto Newspaper Rock. Hiking for a few hours on Cedar Mesa will take you to ruins with names like Moon House and House on Fire—named for the effect of the morning sunlight reflecting on the rocks around the stone structure. And on a multi-day backpacking trip in Grand Gulch, you’ll find cliff dwellings, kivas, and granaries set between burly canyon walls.

Wherever you choose to go, you can’t fail to wonder about the lives of the people who lived on this land some 2000 years ago and what they were expressing through their art.

Highway 12 is perfect for a scenic drive

In a state with no shortage of scenic roads, this route tops the list. At one end, you’ll drive among the huge, surrealistic domes of Capitol Reef National Park where the rock is every color of the rainbow. Just to the west, Highway 12 then plunges south over a 9,400-foot pass and down into the exquisite geology of Grand Staircase-Escalante National Monument.

Some of the most eye-popping views from the road are found between the towns of Boulder and Escalante but there’s plenty to explore along the way, too. Take a quick side trip east of Boulder along the Burr Trail Scenic Byway or get out from behind the wheel and hike around the drip-castle world of Bryce Canyon National Park near the western end of the highway.

A nine-mile scenic drive has overlooks of the bridges, canyons, and a touch of history with ancient Puebloan ruins. Moderate to difficult trails some with metal stairs lead down to each bridge. A longer trail follows the stream bed beneath all three bridges.

Valley of the Gods

Valley of the Gods offers isolated buttes, towering pinnacles, and wide open spaces that seem to go on forever. A 17-mile dirt and gravel road winds through the valley near many of the formations. Short hikes are necessary to reach some, but most can be seen from the road. It is sandy and bumpy, with steep sections.

Days can be spent by anyone with a camera and time. As is usual in this stark landscape, morning and evening are the best times to take photos. The Valley of the Gods is full of long and mysterious shadows in the evening. The morning sun shines directly on the valley and its towers.

San Juan River is the best spot for rafting trips

Meandering through Utah’s southeastern corner, the San Juan carves a gorgeous route through 300 million years of geologic time. On rafting trips, ranging from two to seven days, you’ll float between sheer canyon walls, past cliffs etched with hundreds of petroglyphs, and through miles of twisting “goosenecks.” At night, you’ll camp on sandy beaches gazing at pristine starry skies. Since most of the rapids rarely rise above class II, this trip is less about white water and more about the scenery and experiencing the rhythm of the river. It’s perfect for families with kids and hardcore outdoor enthusiasts alike.

Related Article: Here’s the Proof that Utah is the Most Beautiful State