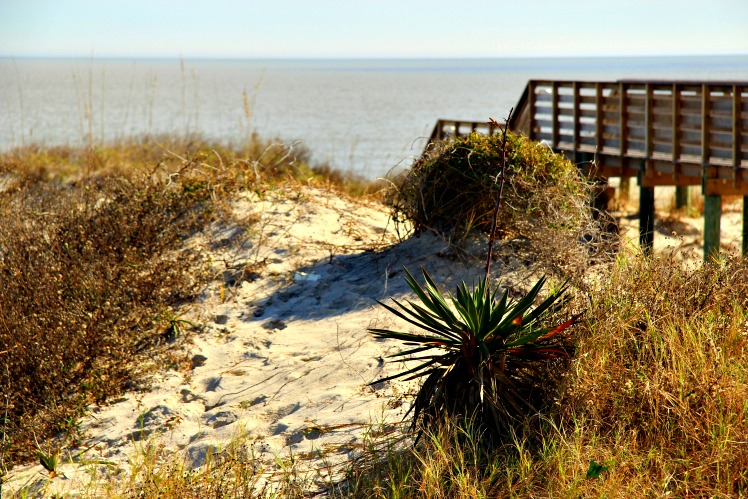 The mainland city of Brunswick and a series of barrier islands are nestled on the Georgia coast, midway between Savannah (Georgia) and Jacksonville (Florida). In an earlier post, I detailed St. Simons and Sea Islands.

Jekyll Island, the southernmost island of the Golden Isles, was purchased in 1886 by a group of wealthy families for a private retreat. The Jekyll Island Club was formed and members built a clubhouse and a neighborhood of “cottages” to be used for a few months during the winter.

These vacationers came by train to Brunswick and crossed the river to Jekyll or arrived in their yachts with family members, servants, and supplies aboard.

The men relaxed and hunted while the ladies had tea, planned parties, and went to the beach.

By 1942 most of these elite vacationers departed the island, never to return. World War II and the economy had taken its toll. Some of the wealthy families left their homes fully furnished and the buildings fell into disrepair.

In 1947 the state of Georgia bought the island for $650,000 and set a provision that 65 percent of it must always remain undeveloped. Some of the wealthy families’ cottages have been restored and are open for tours.

Today, this era of Jekyll Island’s history can be dramatically revisited with a tram tour of the National Historic Landmark District including many of the opulent mansions their millionaire owners called “cottages”.

Jekyll Island offers an abundance of recreational activities that are sure to please visitors of all ages. A variety of amenities include ten miles of white sand beaches, 63 holes of golf, an outdoor tennis complex, a waterpark, fishing pier, nature centers, 20 miles of bike trails, and the Georgia Sea Turtle Center.

Accommodations are varied and include a grand historic hotel and oceanfront properties. RV camping is available at the Jekyll Island Campground which offers 206 campsites on the Island’s north end.

Twenty miles of flat, mostly paved bike paths encircle the island. You can spend a whole day riding beneath canopies of live oaks, along the beach, and through the historic district.

Related: Discover the Golden Isles: Rich in History and Beauty

Bikes can be rented at Jekyll Island Campground, the shopping mall, and various hotels around the island. Tram tours, Victorian carriage history tours, and nature and landscape walks are available from the visitor’s center, located on the Jekyll Causeway.

A fishing pier is located across from Jekyll Island Campground and fishing is available along the beaches.

Jekyll Island, once a haven for America’s elite, now beckons to all.

In terms of development, however, the two islands couldn’t be further apart. Whereas St. Simons offers residents and the visiting public a variety of condominiums, shopping centers, golf courses, and mini-mansions, Little St. Simons is one of the least developed of Georgia’s barrier islands—a privately owned sanctuary devoted to preserving and protecting its ample wildlife.

Known for its privacy, The Lodge on Little St. Simons Island features six cottages, several of which date back to the early 1900s, that can host a total of 32 guests at one time.

Guests may also choose to pass the day relaxing on the porch or enjoying the tranquility of the island’s seven-mile, undeveloped beach.

The streets and squares of this quiet port city were laid out in a formal grid similar to Savannah’s and still bear their colonial names—Newcastle, Norwich, Prince, and Gloucester—giving Brunswick a decidedly English flavor.

The unmistakable flavor of the south, too, can be sampled here, home of the original Brunswick Stew.

Docked at the wharf, the array of shrimp boats are ready to trawl the local waters—evidence of the area’s rich seafood industry. Watch the ocean vessels come into port, see the shrimpers unload at the docks along Bay Street, and then sample the catch of the day at one of the fine restaurants.

Historic Downtown Brunswick, also known as the Old Town Brunswick, is enjoying a renaissance, with the ongoing renovation and restoration of historic buildings and public squares. Old Town Brunswick is centered at the intersection of Newcastle and Gloucester Streets, the traditional commercial corridors of the city.

Newcastle Street is anchored on the south end by Old City Hall (1888) with its distinctive clock tower.

At the north end of Newcastle Street is the Historic Ritz Theatre. Built in 1898 as the Grand Opera House, the Ritz Theatre is Brunswick’s center for quality exhibits and performances by local, regional, national, and international artists.

Homes in Old Town reflect a variety of styles dating from 1819, including Queen Anne, Jacobean, Eastlake, Mansard, Gothic, and Italianate architecture. The Brunswick Landmarks Foundation works to educate the public and protect and enhance the special historic character and charm of Old Town.

With ideal weather conditions throughout the year, Brunswick also supports an active and healthy outdoor life.

Read Next: Historic St. Marys: Gem of the Georgia Coast

Roll in on the souls of men,

But who will reveal to our waking ken

The forms that swim and the shapes that creep

Under the waters of sleep?

On the length and the breadth of the marvelous marshes of Glynn.