As warmer days approach, you might start thinking about your next vacation—and if you’re looking for an unexpected gem you might not have to look very far 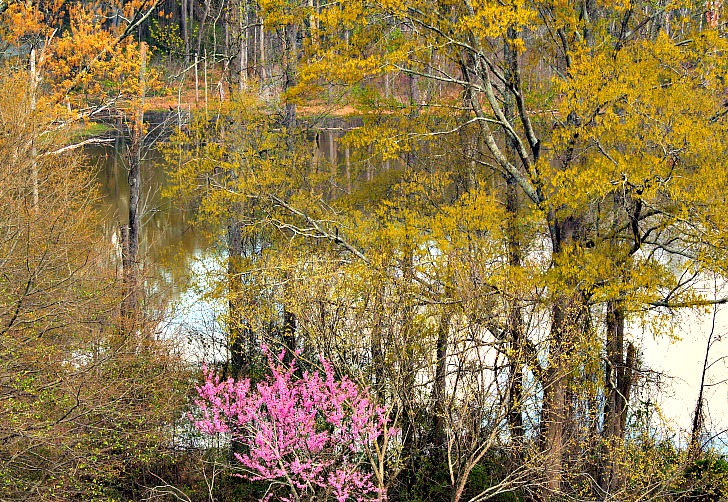 International luggage delivery company MyBaggage recently published its list of the 10 most popular places in the U.S. to visit this spring based on a potentially surprising methodology: TikTok views. And for the most part, the winners weren’t typical beach destinations in Florida or tourist attractions in California or New York.

Rather, the list primarily featured locations near mountain ranges, national parks, and other natural attractions—mostly in the western and southern U.S.

To get the list, MyBaggage ran a series of location-based hashtag searches through TikTok and sorted the results by total views. At the time the report was compiled, videos tagged with Macon, Georgia had 53.7 million views on the app, according to MyBaggage. Texas Hill Country had 51.3 million views, by comparison.

Check out the top 10 for some great ideas on where to potentially travel this spring:

Macon, Georgia is a nature lover’s wonderland. Nestled in the middle of the state, it’s the perfect place for a getaway to experience the great outdoors. Hike through 180 acres of upland forest at Amerson River Park, pick fresh produce at Lane Southern Orchards or Dickey Farms, hop on your bike for a ride through the Historic Downtown, or kayak along the bubbling Ocmulgee River.

Step back in time and visit Ocmulgee Mounds National Historical Park. Ocmulgee has had 17,000 years of continuous human habitation. Explore the museum with over 2,000 artifacts and visit the Earth Lodge with its original floors that are dated to 1015. The park’s 702 acres include fields, forests, and wetlands located along Walnut Creek and the Ocmulgee River. The Ocmulgee Wetlands allows visitors a glimpse into an ecosystem including birds, animal, reptiles, and plants. Immerse yourself in the wetlands environment by taking a stroll on the park’s boardwalk.

Related Article: The Best RV Destinations to Explore this Spring

The Hill Country lies in southwestern central Texas. Although it has no technical geographic boundaries, it generally is defined as the area west of Austin and north of San Antonio—bordered by Interstate 35 on the east, U.S. 83 on the west, U.S. 90 on the south, and Texas State Highway 29 on the north. It is a land of steep, rolling hills; woods; streams and rivers; and small towns. Towns include San Marcos, Boerne, New Braunfels, Canyon Lake, Fredericksburg, Kerrville, and Johnson City.

With a strong German heritage dating to the 1800s, several Hill Country towns are known for their German restaurants and bakeries. Other attractions include wineries, state parks, barbecue restaurants, festivals and fairs, and wildflowers. Canyon, Buchanan, and Marble Falls are three major lakes in the area and among the primary rivers are Medina, Guadalupe, Colorado, Pedernales, and Llano. RV parks and resorts are abundant throughout the Hill Country and along I-35 and I-10.

Related Article: The Best Stops for a Spring Road Trip

Sedona is also known as the Red Rock Country, which—as the name implies—is home to red-rock formations and canyons amongst the desert trails and cacti. The springtime offers visitors a mild temperature to enjoy those red rocks before the heat of summer sets in.

Winding through Sedona’s Red Rock Country, Red Rock Scenic Byway (Highway 179) is often called a “museum without walls.” This All-American Road winds through the evergreen-covered Coconino National Forest and past two famous and beautiful vortexes—Bell Rock and Cathedral Rock. Stop at the several scenic pullouts for great views and enjoy the prehistoric red rocks with nearby parking (RV friendly). There are all levels of hiking and biking trails.

Located in the Coachella Valley with the snow-capped peaks of the San Jacinto Mountains as a backdrop, Palm Springs has long been an upscale escape for area visitors and famous figures. Movie stars and mob bosses ditched L.A. to vacation here during the town’s first boom in the 1920s, popularizing a Spanish-Mediterranean architectural style.

The town received another tourist boost during the ’50s when this became a hip Rat-Pack hangout. They brought with them significant Mid-Century Modern architects who crafted uber-cool homes, many of which were restored in the 1990s.

Today, the village has grown and attractions consist of much more than just hanging out poolside. Whether it’s golf, tennis, polo, taking the sun, hiking, or a trip up the aerial tram, Palm Springs is a winter desert paradise.

Related Article: 12 of the Best State Parks for Spring Camping

The Great Smoky Mountains, also a national park, are a mountain range along the border of North Carolina and Tennessee where visitors can hike, camp, go whitewater rafting, and experience remnants of Southern Appalachian mountain culture. It’s the country’s most-visited national park. The Appalachian Trail also runs through the Great Smoky Mountains.

Scenic drives such as the Newfound Gap Road provide a welcome mat to countless brooks, waterfalls, overlooks, and trailheads; along winding roads where we can capture those s-curve-through-nature photographs that we love so much.

Other locations in the top 10 most popular destinations include:

You make me wanna roll my windows down and cruise.