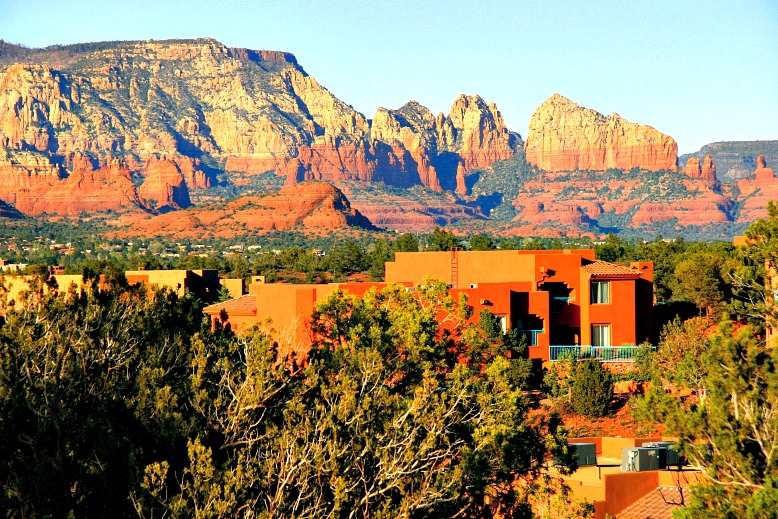 As you look into the wilderness, it may seem vaguely familiar. The familiar part is no surprise. Sedona’s distinctive red-rock landscape and renowned scenery has been featured in nearly 100 films, plus numerous videos and commercials.

Stop by the Sedona Heritage Museum and you’ll be treated to exhibits that highlight the region’s movie power. Beginning in 1923 with the silent film The Call of the Canyon, based on a novel by Zane Grey, through the golden age of American Westerns in the 1940s and ’50s, Sedona has had a distinguished role in film. During the peak years, virtually every major movie studio and big-name movie star worked there. Streets in a Sedona subdivision are even named after movies made in the area.

The strata that contain the famous Sedona red rock were created when a warm, shallow sea brought vast expanses of sand. When those sand grains became covered with thin coatings of iron oxide, they began taking on that red color we see today.

The most famous views in Sedona revolve around Cathedral Rock. Oak Creek flows past the base of the formation to create a much-photographed image. That scene is most often captured from Crescent Moon Picnic Area, known locally as Red Rock Crossing.

Outdoor adventure fills the Sedona area. Hiking and biking trails abound. Whether you take the easy ½-mile Allens Bend Trail, the 5.6-mile Wilson Mountain Trail with a 2,300-foot elevation change, or any of the numerous other trails, you’ll be treated to fabulous scenery and famous landmarks like Submarine Rock or Vultee Arch.

Walkthrough the desert in the coolness of the evening when it’s aglow with moonlight to put a fresh spin on exploring Sedona’s terrain. You don’t need to wander alone. Naturalists at Red Rock State Park offer guided interpretive hikes during the full moon. The tour covers two miles and you’ll learn about Sedona’s fascinating geology, history, and plant life.

Long before T.C. and Sedona Schnebly arrived in Red Rock Country, American Indians considered this land to be sacred. Sedona continues to be regarded as a special place because of its vortexes. Described as intersections of natural earth energy, Sedona’s vortexes are said to inspire meditation and healing. They are usually found on or near a rock formation.

Spirit seekers or those just curious about the metaphysical world can hike to one of Sedona’s vortex sites. These natural areas are said to radiate energy (considered masculine, feminine or a balance of the two) from the earth, drawing people to meditate, practice yoga, or engage in other spiritual and wellness activities.

Although all of Sedona is considered to be a vortex, rock shapes called Airport Mesa, Bell Rock, Boynton Canyon, and Cathedral Rock are all sites where the energy is reportedly more intense. Some say that Chapel Rock is the site of a fifth vortex, but less powerful than the others.

Appearing to rise out of the red rock formations, the Chapel of the Holy Cross towers in a panorama of buttes, valleys, and sky—all a source of inspiration inviting rest and reflection. An eye-catching architectural wonder, the Chapel is built into a 250-foot-tall twin-pinnacled red rock spur. Both the chapel and its 90-foot concrete cross built into the front façade (it functions as both symbol and structural support) are visible from the Red Rock Scenic Byway (State Route 179). Yet thanks to its modernist design, there are no sky-piercing spires or ornate embellishments detracting from its dizzying position. Peek inside the 1956 chapel for a look at the 33-foot bronze crucifix commissioned by a local artist which was installed in 2018.

For a unique experience, stop at Slide Rock State Park and cool off. You can slide down the slippery creek bed, cruise down the creek in a tube, or take a dip in the natural swimming pools. Listed on the Travel Channel’s “10 Top Swimming Holes in the United States,” this natural waterpark is 7 miles north of Sedona along 89A in Oak Creek Canyon.

Named after a suburb of Guadalajara, Mexico, Tlaquepaque is pronounced “Tlah-kay-PAH-kay.” This internationally renowned art and shopping destination mimics Old Mexico and is covered by the refreshing shade of giant Arizona sycamore trees along the banks of Oak Creek.

The galleries feature one-of-a-kind art in a range of media and styles, including contemporary and abstract works, American Indian, and classic Southwestern fine art. You can find everything from wildlife bronzes to Navajo rugs, wind sculptures, and traditional ceramics.

Yet, Tlaquepaque has so much more. Musicians and dancers celebrate special fiestas throughout the year, bringing the sights and sounds of Old Mexico to Sedona.

Why Sedona? Perhaps the meaning of Tlaquepaque contains the most fitting answer. It means the “best of everything.”