Where the buffalo roam and the badlands earn their name 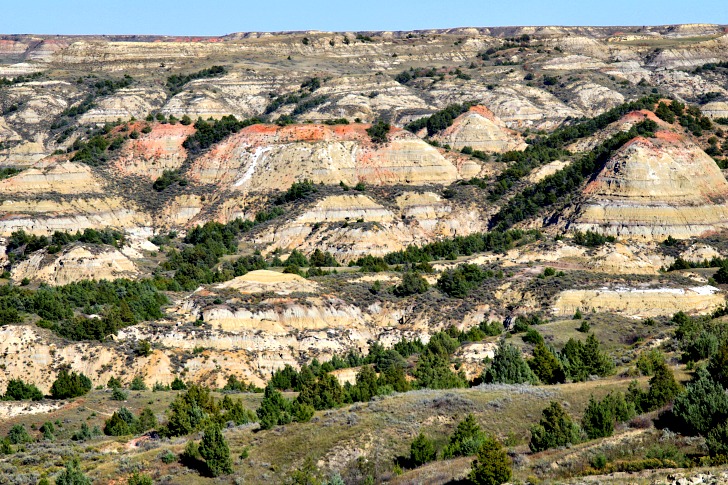 The stretch of Interstate running from Minneapolis, Minnesota, through the heart of the North Dakota Heartland is fantastic if you’re big into grain silos and livestock. Otherwise, nobody’s confusing a drive down I-94 with one of America’s most scenic routes.

Then, out of the blue, it happens: About an hour east of the Montana border—and a seemingly endless four hours from Fargo—the Earth drops out from under the highway.

Where endless grass once stretched to the horizon, tree-dotted canyons border the road. Petrified forests and river washes spread out between them and mountains somehow appear out of nowhere.

This is how you’ll know you’ve reached Theodore Roosevelt National Park, a plains-state paradise often forgotten in the world of Arches and Bryce Canyon. The three-unit park is surprising not just in its grandeur but also in its very existence in a state few know much about.

But if there’s any reason to meander down I-94 through North Dakota, Theodore Roosevelt National Park is it.

The park is broken into three units: North, South, and Elkhorn Ranch. The latter is home to Roosevelt’s old ranch home and little else. But South and North combine for one of the most unexpected experiences in the Midwest.

The best way to see the South Unit is along its 36-mile loop drive which starts just after the Visitors Center in the western town of Medora (come for the pitchfork-fried steak, stay for the Medora Musical, a 90-minute revue telling the history of Medora and the life of Theodore Roosevelt) and continues through most of the park. You’ll roll through fields dotted with prairie dogs under buttes towering into the blue sky and along ridges standing over the jagged badlands.

The best spot for pictures along the 90-minute ride is at Boicourt Overlook where a short 15-minite walk over an easy trail takes you to a sprawling view of the park. This overlook is a ranger favorite for sunsets over the badlands. You’ll be on top of the world when you climb Buck Hill, the highest accessible point in the park. This is a short, but steep trail. The view from the top is worth every step. Enjoy hiking the Wind Canyon Nature Trail alongside a wind-sculpted canyon as you climb to the best view of the Little Missouri River the South Unit has to offer. Another ranger favorite for sunsets.

There’s a better-than-average chance your drive will be delayed by a herd of buffalo but just remember the loop drive is all about the journey and sitting in traffic behind slow-moving bison is an experience you’re unlikely to have again.

For more active travelers, the South Unit offers the most trails of any part of the park. For something otherworldly head down the Coal Vein Trail where you’ll step past steaming patches of dark rock marking large stores of coal. It’s perfectly safe as the coal isn’t burning but if you catch the trail after a rain storm steam still rises out of the ground. Think of it as a little slice of Iceland on the Dakota prairie.

For multi-colored views of the park’s signature Painted Canyon, climb down into the Painted Canyon Trail. The hike lets you delve into steep, desert scenery and only takes about half an hour to complete. Though you can reach it from the Loop Road via a few other trails, it’s still best visited by driving eight miles east on I-94 from Medora and starting at the Painted Canyon Visitors Center.

If you’re feeling strong and want to see some of the park’s more unusual offerings, hike the Petrified Forest Loop trail. Located in the remote northwest corner of the South Unit, this hike takes you through ancient petrified forests and badlands wilderness. The 10-mile loop includes the North and South Petrified Forest Trails as well as the Maah Daah Hey.

The North Unit is smaller than the South but more dramatic. Located about 45 minutes north, the Little Missouri River meanders through deep green canyons, along golden cliffs, and up into soft scenic mountains. Stop at the River Bend Overlook and you’ll see the view that inspired the Bull Moose to preserve the land to begin with.

The North Unit has fewer trails and can be done in one, long day trip. The Caprock Coulee trail is the signature hike, a 4.3-mile jaunt that starts just off the park’s main road. But do yourself a favor and go a little past the official trailhead to the River Bend Overlook. Starting the trail here effectively saves the best for last and makes the hike an experience that just keeps getting better the further your travel.

The Caprock Coulee begins atop the Little Missouri River and takes you through the North Unit’s foothills, inside a canyon, and up the mountains that stand over the badlands and river valley. Every climb brings you to a viewpoint that’s more jaw-dropping than the last, so much so you’ll barely notice the walk takes you almost three hours. No trail in either unit comes close to the scenery you’ll see along Caprock Coulee, so plan to hit it early before the crowds (such as they are) join you.

Along the main road, stop off and see the Cannonball Concretions a few miles in. The mysterious, spherical rocks look almost like they were shot into the side of the butte and offer a quizzical look at the geology of the region. They sit right next to a field of prairie dogs too, making it the North Unit’s best roadside stop.

To experience the whole North Unit on foot, hit the Buckhorn Trail. You can pick up the 11.4-mile loop right past the visitors center and take it through all the scenery that makes the North Unit so cool. The views aren’t quite what they are around Caprock Coulee but if you’re looking for an all-day hike this is the best.

There’s not much of anywhere to stay at the North Unit, though, as it doesn’t boast a fun western theme town outside its gates like its brother to the south. But you can make a full-day field trip north then cap it off with a hearty steak and cool sunset back in Medora.

The park has two campgrounds (both have one group site and many standard sites) and one group site for camping with horses. All campgrounds are primitive (no hookups, no showers). Group sites and half the camp sites in the South Unit are available by reservation. The rest are first come, first served. When choosing a campground, first consider which park unit you plan to visit.

Cottonwood Campground lies inside the park about 5 miles from Medora. It is the South Unit’s only campground. Half the sites are by reservation at recreation.gov while all remaining sites are first come, first served. Most sites are suitable for tents and RVs (no hookups). Cottonwood Campground fills to capacity each afternoon, mid-May through mid-September.

I have always said I never would have been President if it had not been for my experiences in North Dakota.